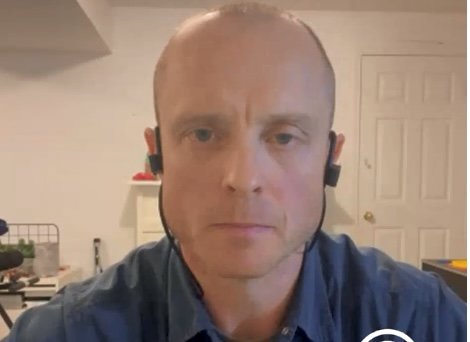 “So visualize that line in the sand about what you’re not willing to let them take away from you, because when you look at history, these things don’t happen overnight. They happen in increments. They will incrementally take more and more away from you. And they only do it because we allow them to. Not just the police, but the civilian population, the mass of the population and again, specific to law enforcement, I think they’re targeting the RCMP.”

In what could be a career-ending video interview that went on for nearly an hour, Bulford, who has spent the past eight years on sniper duty in Ottawa, talked in length about “authoritarian” jab mandates.

Bulford told Bexte that he feels “angry,” a little bit resentful, and concerned and sad for the direction that this country is heading” due to the COVID jab mandates.

He said that Trudeau’s words and language around COVID jabs rules are “deliberately dividing the population when he’s talking about the responsible Canadians,” who take the jabs.

“People like me, I guess the non-responsible Canadians, you are deliberately painting us as the other and even our own commissioner is using that exact same language,” Bulford said.

“That really bothers me and people of my mindset because. You know where that can go? … That’s a malicious act.”

Bulford grew up in northern Alberta, and is a trained sniper tasked with protecting Trudeau and other dignitaries, especially when they are in large, uncontrolled settings. In essence, his job is not unlike that of a member of the U.S. Secret Service that protects the President.

Bulford said that he thinks the COVID jab mandates are “far more about control than it is about public health.”

“They won’t even address natural immunity. People who are remotely working from home still have to do it, even though they have no contact with the public because of their profession. It’s about compliance,” Bulford said.

“That’s why we’re doing what we’re doing. That’s why I’m willing to put my job on the line for this. I’m ready to change careers if I need to. They can come for my job, but I will not participate in this authoritarian-type behavior. I refuse to.”

Bulford told Bexte that when it comes to promoting the COVID jabs, he thinks that the “government and our media are under a tremendous amount of influence from powerful corporations that have big pockets.”

“And they’re under a lot of pressure to say the things that those corporations want them to say. That’s my personal opinion,” Bulford said.

In early October, Trudeau announced unprecedented COVID-19 jab mandates for all federal workers, which includes the RCMP and military, and said the un-jabbed will no longer be able to travel by air, boat, or train.

Along with mandating all federal workers be jabbed, Trudeau said that all federally regulated industries such as airlines and marine transportation would also have to mandate COVID injections.

Sniper: Mandating COVID injections on people is something that is ‘out of bounds’

In his interview with Bexte, Bulford said that the government has “no business telling people what they do with their body.”

“Bodily autonomy to me is paramount. If people out there have chosen to take the vaccine because they felt that was the right decision for them, I fully support your choice. I would never criticize you for that,” Bulford said.

“But I have taken many steps in my life to make myself resilient to illness and disease, and I would hope that you would respect my choice to not take it because I mainly don’t believe that they’re effective, and I think we’re starting to see evidence of that in the long term, you know beyond a few months.”

Bulford said people can “still become sick and they can still transmit” after getting the jabs. He said they are “not willing to take any of the significant safety concern, the safety risks associated with these, when they don’t even show to prevent infection and spread.”

In the interview with Bexte, Bulford said that in his position he does not interact with the public much, so he “wanted to do a little bit of research into it myself before I made before I made a decision (to get the jabs).”

“So I asked, is it mandatory? And the answer I received at the time was, No, it’s not,” Bulford said.

“I want to know a bit more about this, especially since I had already heard rumblings about a new method of technology being implemented.”

Bulford said he wanted to do more of his own research into the jabs after it became apparent that COVID-19 was not as deadly as first thought in early 2020, so he decided to do “a pretty deep dive into the issue.”

“I know from my own experience in my organization that you’re going to get the most accurate picture of the situation on the ground by talking to people that are on the frontline dealing with it.”

Bulford then said that he is “not anti-vaccine” and that he has had many jabs such as for Yellow Fever, which most Canadians would never have to take.

However, when it comes to the COVID jabs, Bulford said he just has “a real concern about the safety and the efficacy of these current products.”

Bulford is a member of the group Mounties for Freedom, which is made up of active and retired RCMP members who say they cannot “willingly participate in enforcing” COVID jabs mandates,” and have called upon their top boss to investigate government officials.

Many consider mandates a gross assault on individual freedoms that’s unnecessary in light of COVID-19’s high survivability among most groups, low risk of asymptomatic spread, and research indicating that post-infection natural immunity is equally protective against reinfection.