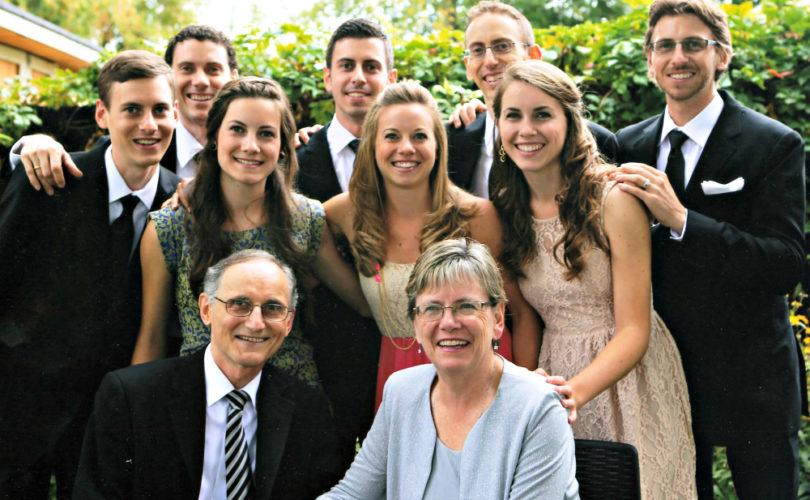 No, the title does not refer to my wonderful, incredible wife and our 8 children and 12 grandchildren, although we are always encountering people who gasp when we tell them our family size (it’s not really that big in the circles we travel in). However, it is indeed a wonderful family that I have been blessed with. Every Christmas, the reality of that blessing especially hits home. What treasure beyond price they all are!

The “really, big wonderful family” is the large network of pro-life leaders and grassroots individuals, very many of whom I have personally encountered and instantly connected with over the years. It always seems as though they have been part of my extended family. It has been astonishing, and yet, so natural and a great blessing that comes from persevering in this work.

During the early years of involvement in pro-life, one of my tasks was to record conference talks and then produce thousands of audio tapes right afterwards so that those who attended could take them home and share the talks with others. Bonnie and the children were all involved in this side mission.

A very special benefit for all of us was the frequent opportunity to meet the world’s most amazing pro-life individuals. Many of those encounters are never forgotten.

I especially recall a 1992 conference in Toronto during which we recorded 52 talks and sold over 4,000 cassettes. I was a dish rag after that one from all the non-stop running around for 3 days. But, the memorable, personal encounters with many of the speakers more than compensated for all the stresses.

There was the great John Cardinal O’Connor of New York, who among many other things, founded the Sisters of Life. He was picked up from the airport in my passenger van and I talked to him in the vestibule before the conference Mass. This thoroughly pro-life cardinal was a joy to have those few days – non-assuming and always cheerful, with a great sense of humor.

After a typically humorous Irish-Catholic introduction to his address to clergy that weekend, the cardinal gave a sober, unusually frank wake-up call to the large group of priests, deacons and bishops present. He noted “the inordinate contempt for human life that is developing all over the world” and that “we are in enormously grave danger of becoming a culture of death as has never been known before in history.” He emphasized, “this is the key issue”and “I am not sure that all of us in the Church have grasped that reality.” He concluded by noting many signs of hope.

As a Christmas gift to LifeSite readers I include below the audio recording of that historical talk by Cardinal O'Connor at the Toronto conference. I am sure many will find it a special treat to listen to such an unusually powerful and insightful presentation from a Catholic prelate on an issue dear to all LifeSite readers.

I was also able, several times before and during the conference, to talk with Dr. Jerome Lejeune from France, the discoverer of the gene for Down syndrome and a truly saintly man dedicated to finding a cure. There is currently an ongoing cause for formal sainthood for Dr. Lejeune. He was someone I can never forget having met.

Another time I interviewed the late New Jersey Bishop Austin Vaughan, of Operation Rescue fame, at my home where he had lunch with my wife and me. Vaughan was another one of the most humble, quietly heroic and truly saintly pro-life heroes I have ever met.

Bishop Vaughan, with the permission of his overseer, Cardinal O’Connor, had been arrested numerous times, and was treated roughly on some of those occasions, for doing nothing more than quietly praying while totally peacefully blocking access to an abortion death center.  Imagine if more, or even just a few, bishops did what he did.

The late Father Richard John Neuhaus of First Things, was an inspiration.  I can never forget, while recording one of his always powerful talks, his proclamation, at a large conference to all the older pro-life leaders looking to the new, younger leaders to take over. He emphatically stated, ‘You old people, you can’t retire, you’re in this for the duration, you can’t quit, and you’re here until God calls you to your eternal reward.’

Those of us with much experience must continue to be involved and mentor the younger activists until the day we die. That is how crucial Neuhaus saw the great, worldwide battle over the sacredness of life. He knew the importance of the hard-learned, long experience of the veterans which the young needed to protect them from their natural, trusting naivete and inexperience in dealing with the raw evils of the Culture of Death. He followed his own advice. St. John Paul II also frequently urged us to understand the grave need for intense involment in this work and see it as the most important work in the world.

Pope Benedict has had a similar view of the gravity of the dangers of the death movement for the world and the all-important role of the laity and the rest of the Church in this great, worldwide battle of good against evil.

Then there were deeply personal, moving interviews in our home backyard or in the basement recreation room and a meal at our house with Julia Holcomb (Mother of Steven Tyler’s aborted baby) and later with Reggie Littlejohn (Women’s Rights Without Frontiers). There was another moving interview with Reggie outside the US Capital building regarding her two new daugthers from China. Again, these were like visits with close relatives, so quickly and naturally did we connect.

I had the honor of meeting and shaking hands with Cardinal Ratzinger before he became Pope and was struck with his gentleness and natural friendliness. There were a few encounters with Mother Teresa, a tiny, incredible powerhouse of a woman and encounters with Pope John Paul II. There have been numerous private, memorable meetings with leading pro-life bishops of all ranks, a few papal nuncios and various faithful Vatican officials.

Contrary to what you might think from Pope Francis’ recent, highly critical address to the Vatican Curia, there are numerous, faithful and exceptionally dedicated Vatican officials deserving of praise and support such as Cardinal Arinze, Cardinal Burke and Rev. Wojciech Giertych. At the same time, we realize there are also many others deserving the rebukes that Francis gave to them.

Just recently I met for the first time and interviewed Thomas Jacobson, Executive Director of Global Life Campaign. I genuinely felt privileged to meet with this wonderful person, so totally dedicated to helping pro-life nations to preserve their good laws protecting children in the womb. He too was instant family.

These few names barely scratch the surface of a full list of all members of the pro-life family that I have been blessed to encounter and to often have ongoing relationships with over the past over 30+ years. I dearly do respect and love them all. They are heroes in our corrupt culture.

LifeSite has a policy of trying to report on and support the good work of every person and organization truly dedicated to defending life and the family. They are our family.

We understand that for all of them, as it is for us, this work is frequently a trial and often has a significant personal price for such commitment. No one can continue to do such difficult work and endure so many losses and seeming failures (there are also victories of course) without being fully committed to it and trusting that God is always in charge no matter what does or does not happen.

Few can persevere without a solid faith life. They are therefore brothers and sisters in Christ, or in the case of persons such as our dear friend Rabbi Yehuda Levin, brothers who fully love the Lord and their fellow man.

The earthly rewards are minimal. Pro-life, pro-family leaders need all the moral and other support that they can get, even when they might hold opposing views on strategy or if we don’t entirely agree with how they are doing things – as long as their tactics are peaceful and not overly critical of or undermining the efforts of other pro-life, pro-family organizations and leaders.

What does this all have to do with Christmas? I felt compelled to write this as my Christmas reflection. I guess that is because it is about love — Christ’s and all these leaders’ love for all persons, especially the most vulnerable and innocent, as was the Christ Child on Christmas Eve.

Contrary to what many opponents or critics state, I believe the pro-life, pro-family movements, which to me are really one movement, is the greatest movement of love on the planet – next to authentic Christianity itself.

It usually involves personal sacrificial giving for years for little, if any earthly return. It involves often enduring much hostility, ridicule, slander, painful misunderstandings, betrayals and repeated seeming failures. But, there is great joy in the many supportive relationships and the satisfaction in doing this work that we all know is desired and blessed by God.

This work is often continued by individuals, as per Fr. Neuhaus' instruction, to their last breath.

Pro-life work is especially supported by the humble and poor in spirit lacking earthly treasures or high social status, who give much of what little they have to save the most defenseless. Many pro-life activists have experienced abortion, other personal suffering and conversion and therefore identify with the vulnerable unborn child and exploited mothers.

This movement is closely identified with the life of the Master, Jesus Christ, who gave everything of Himself for us. If only many more understood this connection. It would be so very good for them, and for us to have them as part of our very special family of love.

I can’t imagine doing anything other than this work. As we often say, the rewards are out of this world.

Editor's Note: As has been our custom for over a decade, LifeSiteNews is again this year publishing Christmas reflections by our staff. For a full listing of this year's reflections, click here.