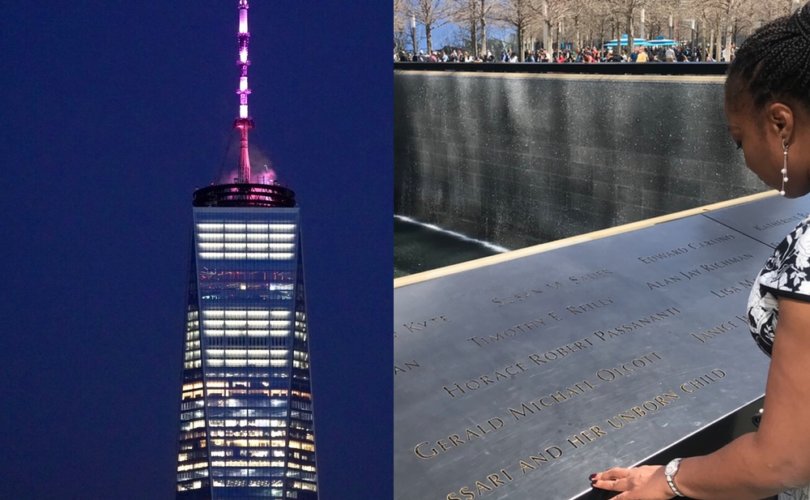 NEW YORK, New York, January 28, 2019 (LifeSiteNews) – When New York Gov. Andrew Cuomo directed the One World Trade Center’s spire be lit in bright pink to celebrate his successful effort to legalize abortion up until the moment of birth, pro-lifers pointed out his towering hypocrisy.

“You lit the spire to celebrate the abortion of the unborn in the same location where I went to weep over the memorial of 11 UNBORN children killed by terrorists,” tweeted pro-life activist Obianuju (Uju) Ekeocha.

The hypocrisy of the governor’s directive, ordering a celebration of the right to murder unborn children on the hallowed ground where eleven unborn children were murdered by terrorists in the 9/11 attack, is stunning.

Uju was not the only one to call attention to Governor Cuomo’s self-indicting action.

“The [One] World Trade Center is a powerful symbol of American resilience and unity following one of the most terrible acts of violence against innocent people in our nation’s history,” noted Marjorie Dannenfelser, Susan B. Anthony List (SBA) president.

“Victims of that terrorist attack include unborn children and their mothers who are remembered at the 9-11 memorial,” continued Dannenfelser. “Using this landmark to cheer a sweeping assault on the lives of the most vulnerable is wrong and divisive.”

“We grieve for the thousands of innocent unborn girls and boys of New York who will perish as a result of Cuomo’s extreme agenda, who are forgotten by so many of those in power,” added the SBA head.

On the occasion of the tenth anniversary of the World Trade Center attacks, 9/11 memorial president Joe Daniels told Newsday that acknowledging the unborn in the WTC memorial underscores how deeply the attacks devastated families and their futures.

“It's a special part of the memorial,” he said. “It reinforces that message about the whole project that the folks were just like us, that they were about to start these lives … It reminds us that they were who we are.”

Ironically, in contrast with Daniels’ statement, the Empire State governor has chosen to celebrate the future devastation of more unborn children, more families, and more futures.

“Now it looks just like the needle that is used to supply the lethal injection to the living unborn child,” noted Thomas Peters.

Now it looks just like the needle that is used to supply the lethal injection to the living unborn child. https://t.co/j1UiMmuJJK