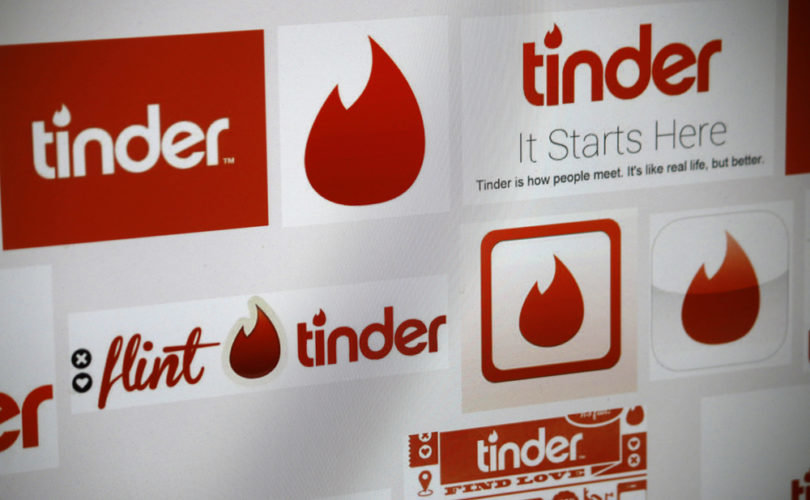 November 17, 2016 (LifeSiteNews) — The online “hookup” and “dating” app Tinder announced Tuesday that it is expanding its “gender identity” choices for users from “male” and “female” to a total of almost 40 genders in a move heralded by the widely-distrusted “mainstream” media who regularly promote transgenderism.

The Los Angeles-based company worked directly with the LGBTQ organization GLAAD to add 37 new “gender identities,” such as “Genderqueer,” “Two Spirit,” “Transmasculine,” and  “Neither.”

Here is the full list of 37 new “gender identity” options for users added by Tinder, courtesy of the Daily Mail. It is not clear why both “Female to Male” and its acronym, FTM — and “Male to Female” and MTF — are listed as separate gender identities:

Neutrois – (“Neutrois is a non-binary gender identity that falls under the genderqueer or transgender umbrellas,” incorporating  the following: “Neutral-gender, Null-gender, Neither male nor female, Genderless, Agender”— Neurtrois.com)

In a promotional video using actors and writers from the Amazon.com show “Transparent,” Tinder CEO Sean Rad said, “Everyone has the right to be who they are, and meet someone great who loves them for who they are.”

But the pro-LGBTQ New York Times and GLAAD hit upon the larger significance of the change: helping to further mainstream transgenderism, which conservative critics call “gender confusion,” in American culture and throughout the world. (Rad claims that “Tinder has created more than 20 billion matches in 196 countries.”) Times reporter Liam Stack writes:

“The move, part of the a push against persistent harassment against transgender people on the service, was hailed by community advocates as an important example for other social media.”

Nick Adams, the director of transgender media programs for GLAAD (formerly the Gay and Lesbian Alliance Against Defamation), said, “This update reflects a growing awareness that trans people are part of the fabric of everyday life, which in turn, accelerates acceptance for transgender and gender non-conforming people.”

GLAAD, like many other LGBTQ lobby groups and activists and allied liberals, generally celebrates only a certain brand of “inclusion” and “acceptance.” The homosexual-transgender media organization regularly demonizes and denigrates Judeo-Christian-based pro-family groups like Family Research Council.

Moreover, GLAAD vilifies and attempts to block the visibility of ex-“gays” — people like Joseph Sciambra who have abandoned homosexual or transgendered lifestyle. Thus the same organization that embraces people who identify as “genderqueer” (see below) works to delegitimize former homosexuals by pressing the media to ask tough questions about their ex-“gay” identity. (See this dated GLAAD report, “Unmasking the So-Called ‘Ex-Gay’ Activists.”)

Tinder took the action after “transgender” users complained that they were being “reported” on the site by other users who found out they were transgender — after which they were often blocked temporarily by the site. However, one man’s claim of victimization or online “harassment” is another’s assertion of his basic right and need to know if the person with whom he is interacting is actually biologically male or biologically female.

Tinder works by users reviewing various “profiles” on the app and then swiping left for “No” (not interested) or right for “Yes” (interested).  Since the goal of many gender-confused people is to “pass” as the opposite sex, it can be confusing if a male Tinder user thinks, for example, that he’s saying “yes” to a woman — only to find out later that the “woman” is really another (biological) man who is “identifying” as female.

Similarly, women have been shocked to learn that the “guy” they are dating is actually a woman trying to live as a “man.”

A much more serious manifestation of the same problem has led to a rash of murders of “transgender women” prostitutes — men “hustling” their bodies on the streets posing as women. Some men turn violent after learning that the prostitute they had sex with was not a woman but a man posing and dressed as one. LGBTQ activists tend to label such murders as mere “hate crimes,” minimizing the gender confusion factor.