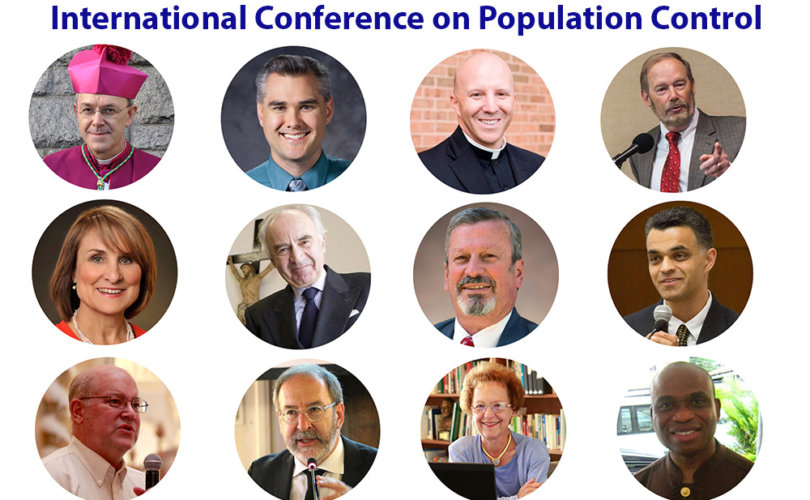 Most of the speakers for the conference

WASHINGTON, D.C., September 19, 2017 (LifeSiteNews) — A global symposium set for next month aims to address the threat of population control and examine how radical enemies of life are working to undermine and subvert the Catholic Church.

The International Conference on Population Control will be presented in an online format, making the conference available to everyone. The Lepanto Institute is hosting event with the theme “How Radical Enemies of Life are Pushing Their Global Agenda to End Poverty by Eliminating the Poor.”

The conference is scheduled online for October 17-19 from noon to 4 p.m. EST. It features 12 noted speakers who will explain how environmentalism, foreign aid and international foundations are attacking the poor in the name of reducing poverty.

“Many people are completely unaware that population control is pushed by organizations and charities they donate to and trust,” said Michael Hichborn, president of the Lepanto Institute. “What they are told is helping vulnerable people actually harms them, robbing them of opportunities and the right to self-determination.”

Click here to register for the International Conference on Population Control.

Radical population control advocates and abortion proponents have also been establishing a foothold inside the Catholic Church under the pretext of poverty reduction and environmental protection, Hichborn told LifeSiteNews.

“They’ve clandestinely worked their way inside the Vatican and are now actively working to undermine and subvert the Church and her teachings from within,” Hichborn said. “This crucial and timely conference is being organized because the Catholic Church is under unprecedented attack.”

“The conference is designed to inform our audience of the imminent threat facing humanity and the Church,” Hichborn told LifeSiteNews. “Participants will not only learn about who the major players are, but how the agenda is hidden, where it is hidden, and what we can do to fight it.”

LifeSiteNews has chronicled the disturbing trend of extreme population control zealots and abortion advocates infiltrating the Church at its highest levels, and how they are using the Church as a platform to advance their agendas, often through presentations at various Vatican offices such as the Pontifical Academy for Science and the Pontifical Academy for Social Sciences.

“Never, in the 2,000-plus-year history of Catholicism, have anti-life forces gained such a dangerously high level of access and influence,” stated Hichborn.

Attendees will learn the identities of the population control extremists funding and leading the subversion of the Church; how population reduction — including abortion, forced sterilization, and condom distribution — is being covertly disguised as poverty reduction; the devastating implications this subversion will have for humanity if it is not stopped; and how they can help protect the Catholic Church from these internal attacks.

Hichborn remarked that the conference’s online format makes it accessible to anyone.

“Large conferences on these issues have been held all over the world,” he said. “Usually one has to travel to Washington, D.C., New York, Rome, Brussels or Geneva for something like this. But this is the first time such a large-scale event has been offered in an online format so that anyone anywhere can participate at the same time.

“We've committed to make this important information with such eminent speakers available around the globe,” he said.

The Lepanto Institute president also noted the significance of this issue at the point in time.

“Population Control is an agenda that ties together nearly every major cause of the anti-family left,” he said, “homosexuality, environmentalism, poverty-reduction, foreign aid, and even mass immigration are connected to the population control agenda.”

“For the sake of souls, lives, and the family, it is vitally important for everyone who calls themselves pro-life to stand up now and fight,” Hichborn added. “The fact of the matter is, if we don't fight this now, it won't be long before there won't be a civilization left to defend.”

Registration for the live event is free. Recordings and transcripts of the sessions will be available afterward for a fee.

Click here to register for the International Conference on Population Control.