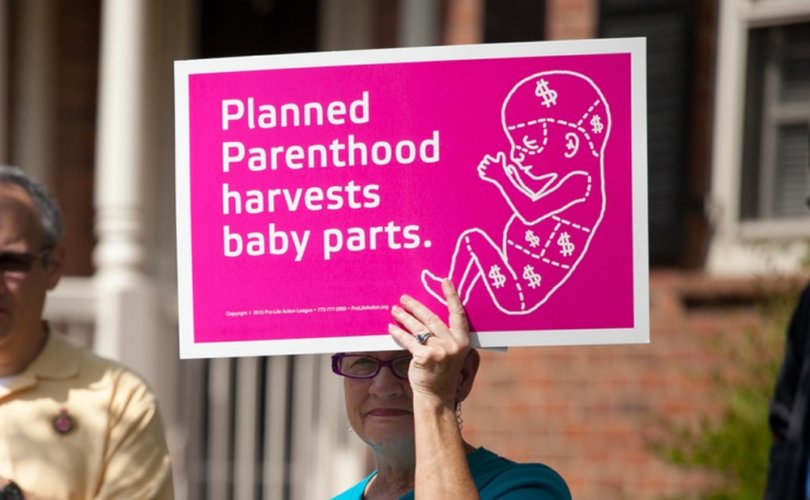 Dr. Theresa Deisher testified on the last day of the criminal preliminary hearing of David Daleiden and Sandra Merritt that had stretched into three weeks.

The investigative journalists from the Center for Medical Progress (CMP) are charged with 14 felony counts of taping confidential information without consent in connection with the undercover videos CMP released in 2015 exposing Planned Parenthood trafficking in baby body parts.

Public outrage over the groundbreaking videos prompted congressional hearings and calls for the federal defunding of Planned Parenthood.

Daleiden and Merritt are claiming a Section 633.5 defense that allows covert taping when investigating violent crimes. Their lawyers are also arguing the law does not consider as confidential conversations that have a reasonable expectation of being overheard.

A focus of Daleiden’s early research, a key element in the defense’s case and a source of public debate during the hearing, is a 2012 Stanford University study that used human baby hearts supplied by the fetal organ harvesting company StemExpress in a Langendorff apparatus.

Daleiden testified that Deisher was one of the experts he consulted in 2012 about whether the hearts used in the study were harvested from living babies, and Deisher told him that was the case.

She confirmed that in her testimony Wednesday as a defense expert witness.

Deisher, who holds a Ph.D. in Molecular and Cellular Physiology from Stanford University School of Medicine, told the court that a heart requires energy to relax after contracting, and if it contracts after it “runs out of energy,” it is useless for research.

“Once the heart goes into contraction, you can’t get it to come out of that position,” she told the court.

To be harvested, a heart “has to be beating and be arrested in a relaxed position” by perfusing it with a potassium solution, she told the court.

The relaxed heart is then transported to the research site, where it is started again electrically, Deisher said.

So to be used in the Langendorff apparatus, “the fetal heart would have to be alive when dissected from the fetus?” asked Daleiden’s lawyer Brentford Ferreira.

“It has to be beating and immediately go on the Langendorff,” Deisher said, or “be arrested in a relaxed state while it was still beating and subsequently put on a Langendorff.”

Deisher testified that according to scientific protocol, the 2012 Stanford study’s citing of StemExpress meant the company supplied the human hearts.

She said Daleiden first called her in 2010 when he learned about the harvesting and selling of aborted baby body parts.

Deisher said she told him then that “the most horrific thing” about the trafficking in baby body parts was “that some of the babies had to have beating hearts when they were harvested.”

Between 2010 and 2013, Daleiden called her several times. “He wanted to know what a Langendorff was” and the vocabulary of stem cell research, she said. “I just taught him the science.”

Deisher said she is the founder and CEO of a company in Seattle that is developing alternative research methods “to eliminate human exploitation in medical research.” Her website bio says she is the first person to discover adult stem cells.

She testified that it’s never necessary to use fetal organs for stem cell research, because there are induced pluripotent stem cells available, which are produced from adult stem cells and can be cultured into any type of body cell.

Deputy Attorney General Johnette Jauron asked Deisher if she consulted with Daleiden about his undercover operation before he began the 30-month project.

Deisher said she hadn’t heard of CMP until the videos were released and that she only watched them “much later.”

Judge Christopher Hite also questioned Deisher, asking her if she ever discussed Daleiden’s undercover investigations with him or any of the “Does,” if she had performed abortions or worked at a fetal tissue procurement company, or was familiar with abortion techniques. Deisher said no to all questions.

“I thought it was riveting, especially when she talked about the horror of babies being born alive and having their hearts being torn out of their little bodies,” Ferreira said.

Deisher’s testimony shows “why I and my colleagues like Sandra Merritt and others did our undercover work with the Center for Medical Progress,” Daleiden told LifeSiteNews.

“Those kids are actually killed through vivisection and that is a human atrocity that has to be exposed.”

Deisher reiterated later to LifeSiteNews that in order to obtain a heart for a Langendorff apparatus, the organ harvesters “would cut open the baby’s chest and they would take the heart out beating and drop it in a buffer with potassium.”

It would then be transported in a vial with pre-oxygenated buffers and other preservatives to the research site.

Anyone involved in the field would know this is the case.

“Of course, if the heart isn’t beating, they can’t get any of these cells, it’s impossible, technologically impossible,” she said. “Nobody wants a stopped heart.”

“The whole process is beneath the dignity of a civilized society, to cannibalize the bodies of aborted babies, to harvest from a living baby. They’re not even anesthetized. We don’t even do that to mice and rats,” Deisher told LifeSiteNews.

“There’s no scientific or medical reason that we need to do that and anyone who claims it either does not understand the full science or they’re not telling the truth,” she said.

She believes the charges against Daleiden and Merritt will be dropped.

“If they don’t dismiss the charges, then they’re not following the law,” Deisher said.

“He was investigating based on the fact that I told him that babies were being harvested alive. That’s a crime, and undercover investigation is, if I understand from what the lawyers told me, perfectly legal if you think there’s a crime that’s occurring.”