Only one third of US Catholics plans to attend Mass for Easter: poll

Many churches in the country, whether Catholic or Protestant, have some COVID-related restrictions still in place.

March 31, 2021 (LifeSiteNews) — A recent poll revealed the severe effect COVID-19 restrictions have had upon churchgoers in the U.S. Catholics are shown to be most cautious, with only 5% of Catholic churches open without any restrictions, as they were before the arrival of the virus. Meanwhile, Evangelical protestants are the most eager to return to normal, and look set to fill their churches the most at Easter time.

The poll, entitled “Life in U.S. Religious Congregations Slowly Edges Back Toward Normal,” was conducted by Pew Research Center, surveying over 12,000 adults in the U.S. from March 1 through 7.

Compared to the previous July 2020 poll, there was an increase of people who had recently attended a religious ceremony in person.

A total of 76% of people now declared themselves to feel “very/somewhat confident” about attending church without contracting the virus, compared to 64% last July.

In conjunction with an increase in physical attendance, Pew also noted how live streaming or recording of services had paradoxically increased across the board since last summer, although the numbers of people watching such services had slightly dropped from 72% to 65%.

Yet while figures documented somewhat of a general reconciliation in churchgoers’ minds, between their perceived safety and attendance at church, there still remains a significant decrease in the amount of people planning to attend church over Easter.

Just under two in five Christians (39%) declared that they would attend church in person for Easter: a sizeable decrease to the 62% that would attend normally. The denomination with the highest predicted Easter congregation are Evangelical protestants, while only 36% of Catholics planned to fulfil their Easter obligations.

In fact, the cautious trend amongst Catholics continued when dealing with the various restrictions currently in force in churches. While only 12% of the overall survey group said that their churches were operating as they were before COVID, Catholic churches without restrictions were the least common at 5%, compared to 11% of Christian churches.

Evangelical churches appeared the most relaxed in this area, with nearly one in five (19%) of their churches reportedly open as they were before the onset of COVID-19.

However, when examining churches which were open with some restrictions in place, Catholic churches were in the lead with 79% of churches in this country, compared to 62% of Protestant churches generally, and a slightly higher figure of 67% of Evangelical churches.

Regarding the COVID-related measures in place, Pew wrote that half of the whole survey reported either physical distancing or mask mandates, with four in ten mentioning capacity limits, and 25% of the survey group having limits on congregational singing. 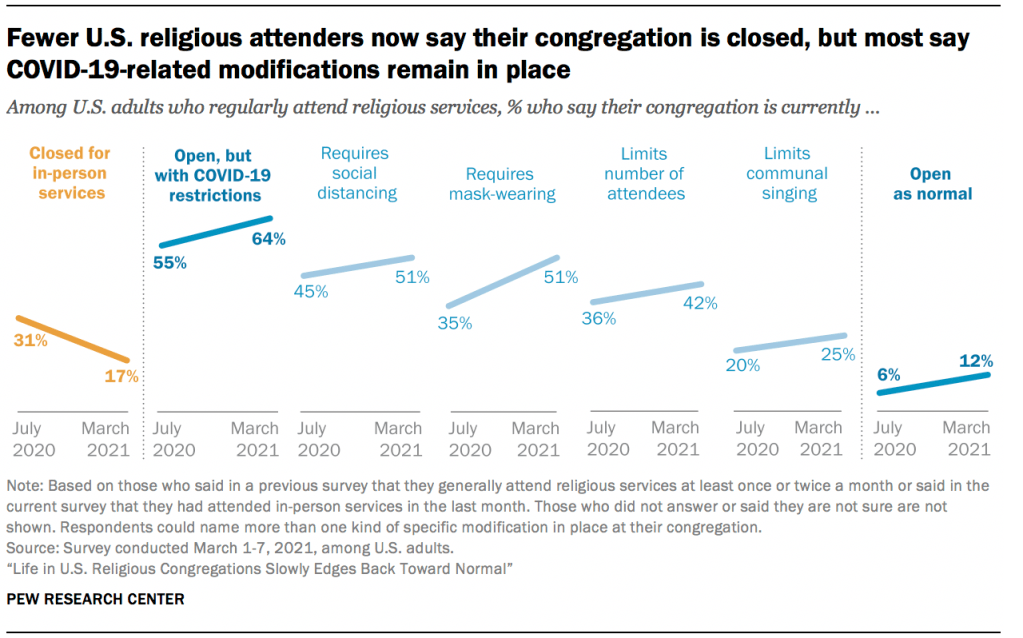 Worship-infringing limitations like these were most predominantly seen in Catholic churches. The survey found that “seven-in-ten Catholics say their parishes are requiring social distancing and/or mask wearing, and six-in-ten say there are limits on the number of people who can attend Mass at any one time.”

Catholic congregations were significantly more in favor of all such restrictions, apart from complete closure, than any other group, with 67% of Catholics desiring ceremonies with COVID restrictions.

But while these churches remain closed, there was a marked increase in numbers of people wanting the church open, without any restrictions, in comparison to last July’s report. A total of just over one in four people now held this opinion, compared to just about one in ten in July.

Despite the interruptions to regular church attendance, and the very different approach to it currently with numerous restrictions, the poll did find that people’s faith had increased as a result of COVID-19. A grand total of 23% of the survey group who were “highly religious to begin with” declared that their faith had become stronger, with 31% of Christians and 24% of Catholics polled reporting such an increase. Few confessed to a weakening of faith, an average of 4%, while the majority commented that they had found no difference in their faith over the last year.

With such results from the survey, revealing significant numbers of churches only open with restrictions, as well as a sizeable minority of churches which are completely closed, the effect of COVID-19 related restrictions looks set to continue for some considerable time to come.

Pew predicted that “this promises to be the second consecutive highly atypical Easter season for Christians.”