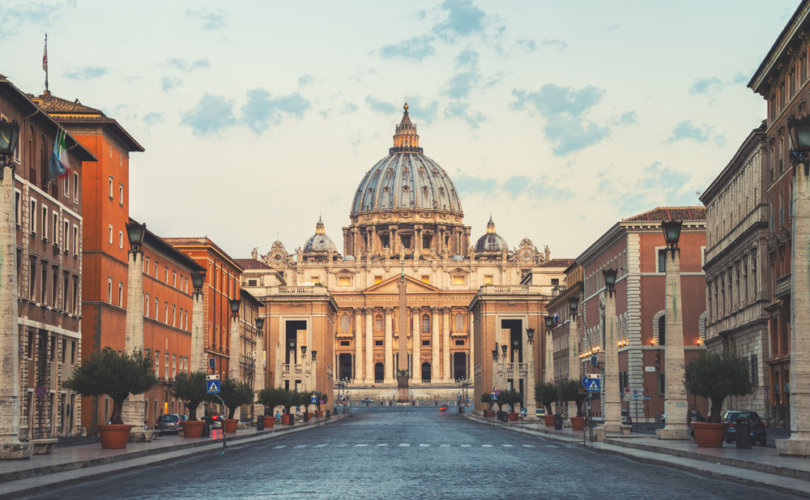 November 10, 2017 (LifeSiteNews) — Catholics who insist that the faithful are duty-bound to submit to a pope whose teachings clearly contradict previous popes and even the Bible inadvertently fulfill the “crude protestant caricature of papal authority,” wrote Catholic academic Dr. Edward Feser.

“Protestants sometimes accuse Catholics of believing that a pope has the authority to make up new doctrines or even to contradict Scripture,” wrote Feser, Associate Professor of Philosophy at Pasadena City College in California, in an article published in Catholic World Report October 30.

According to the “crude protestant caricature of papal authority,” if a pope “decided one day to add a fourth Person to the Trinity, or to declare abortion morally permissible, or to delete the Sixth Commandment, then – so the idea goes – Catholics would be duty bound to salute crisply, bark an enthusiastic ‘Yes, sir!,’ and fall in line robotically with the new doctrine du jour.”

Feser said the reverse is actually true, namely that the Church “puts the pope in a doctrinal box.”

“Even when he is speaking ex cathedra [authoritatively from the chair], he must stay within the parameters he has inherited,” he said.

“He can draw out implications implicit in earlier doctrine, but he cannot make up new doctrines out of whole cloth. And what he teaches must be consistent with the entire body of past binding teaching. He is not permitted to contradict past doctrine and he cannot pit one doctrine against another,” he added.

The professor in his article was responding to arguments made by Dr. Robert Fastiggi in support of the Pope Francis’s recent move to seemingly overturn Catholic teaching on capital punishment by declaring “contrary to the Gospel.”

The professor quoted from recent Vatican Councils to demonstrate how the pope is tasked by God to, in the words of the First Vatican Council, “not…make known some new doctrine, but…religiously guard and faithfully expound the revelation or deposit of faith transmitted by the apostles.”

He also quoted the Second Vatican Council’s teaching that the Church cannot teach contrary to Scripture.

“[T]he living teaching office of the Church… is not above the word of God, but serves it, teaching only what has been handed on, listening to it devoutly, guarding it scrupulously and explaining it faithfully,” Feser quoted of Dei Verbum [Word of God].

The professor said that a pope is not permitted to “work around these restrictions by coming up with novel reinterpretations of Scripture or of past binding doctrine.”

He quoted from the First Vatican Council which taught that the “meaning of the sacred dogmas is ever to be maintained which has once been declared by Holy Mother Church, and there must never be any abandonment of this sense under the pretext or in the name of a more profound understanding.”

Added the Council: “May understanding, knowledge and wisdom increase as ages and centuries roll along… but this only in its own proper kind, that is to say, in the same doctrine, the same sense, and the same understanding.”

Feser said that the pope is “not protected from all theological error when not speaking ex cathedra [from the chair].

“This is not some novel opinion put forward by theological liberals or radical traditionalists. On the contrary, the Church has always recognized this, and it was commonly acknowledged in the very conservative approved manuals of theology in the pre-Vatican II period,” he said.

He quoted from Van Noort’s 1957 Dogmatic Theology to back his point.

“All theologians admit that the pope can make a mistake in matters of faith and morals when so speaking: either by proposing a false opinion in a matter not yet defined, or by innocently differing from some doctrine already defined. Theologians disagree, however, over the question of whether the pope can become a formal heretic by stubbornly clinging to an error in a matter already defined. The more probable and respectful opinion, followed by Suárez, Bellarmine and many others, holds that just as God has not till this day ever permitted such a thing to happen, so too he never will permit a pope to become a formal and public heretic. Still, some competent theologians do concede that the pope when not speaking ex cathedra could fall into formal heresy.”

Commented Feser: “Notice that the Church permits theologians to hold that a pope could even in principle fall into formal heresy when not speaking ex cathedra, and some approved theologians have in fact held this, even if they disagreed about how likely this is in practice.”

The professor went on to answer the argument that a pope should never be accused of error because it could serve to undermine people’s confidence in the office of the pope and in papal authority.

“In fact, the opposite is the case. You cannot reinforce people’s confidence in the papal Magisterium unless you first make it clear exactly what are the scope and limits of that Magisterium,” he said.

“When well-meaning theologians…tie themselves in logical knots in order to avoid having to admit that a pope might have misspoken or made a mistake when not speaking ex cathedra – despite the fact that the Church herself has always acknowledged that this can happen! – they reinforce the slander that Catholics are committed to what I have called the Crude Protestant Caricature of papal authority,” he added.

Feser said that arguing that Catholics must follow a pope when and if he commits doctrinal error does not help anybody.

“In particular, they give (however unintentionally) the false impression that popes can reinvent doctrine at will and simply stipulate, by dictatorial fiat, that the novelties they are teaching are ‘scriptural’ and ‘traditional,’ he said

“They thereby make a laughingstock of Catholic claims to have preserved the deposit of faith whole and undefiled. And they thereby undermine confidence in the papal Magisterium. Non-Catholics are liable to conclude that Catholic claims about the papacy are a kind of Orwellian sophistry. Some Catholics are liable to conclude this too, and to lose their faith as a result – whereas if they were reassured instead that the Church does not require them to deny the obvious, their faith will be saved,” he added.

Feser’s position is similar to that of Catholic philosopher Dr. Josef Seifert, who recently argued that faithful Catholics “have an obligation” not to follow or obey the Pope if he clearly contradicts perennial teachings of the Catholic Church.

“I think that as soon as we find that a new teaching is false, we are obliged not to obey it. And as soon as we find a new pastoral decision of the Pope inapplicable in good conscience, such as giving the sacraments to unrepentant sinners on the basis of an (impossible for us) ‘discernment’ of whether their sin is compatible with their being in the state of grace for subjective reasons, we are likewise morally obliged not to obey it,” he said in an interview this month.

There can be no real “unity with the Pope” unless there is a prior unity based on “truth,” he said.