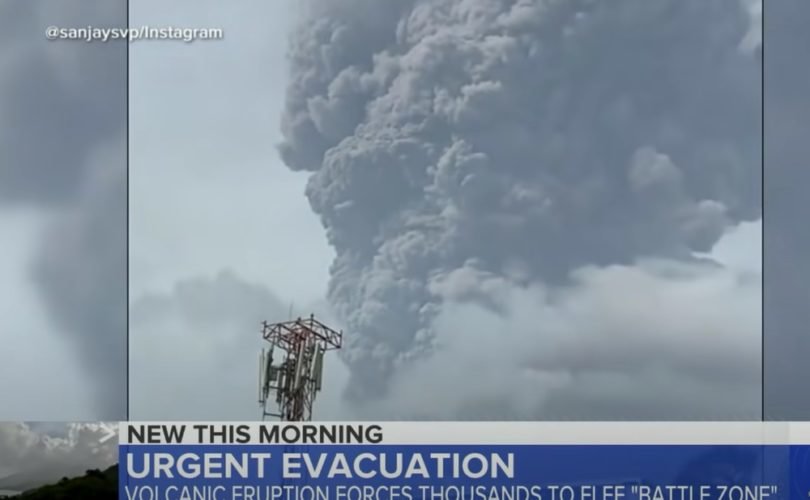 ST. VINCENT, Caribbean, April 13, 2021 (LifeSiteNews) – Only those who have been vaccinated against COVID-19 are being allowed to board cruise ships sent to rescue people from the violent eruptions of a volcano on the Caribbean island of St. Vincent and take them to surrounding islands, the island’s president announced Friday.

The volcano La Soufrière erupted Friday, spewing plumes eight kilometers into the sky and raining white hot ash down on thousands of residents who were forced to flee their homes. More explosions occurred over the weekend and on Monday, fast-moving currents of molten lava flowed down in rivers from its peak.

“It's destroying everything in its path,” Erouscilla Joseph, director of the University of the West Indies’ Seismic Research Center, told the Associated Press. “Anybody who would have not heeded the evacuation, they need to get out immediately.”

About 20,000 residents from communities in “red zones” close to the volcano have been told by the government to evacuate their homes. Since Thursday evening, when the 4,000-foot volcano began erupting, an estimated 3,000 gathered in government refuge stations in schools and community centers while thousands of others sought refuge privately.

However, Prime Minister Ralph Gonsalves said that only people who received experimental COVID-19 injections would be allowed to board the ships.

“The Chief Medical Officer will be identifying the persons who are already vaccinated so we can get them on the ship,” Gonsalves said at a press conference on Friday.

Simone Keizer-Beache, the chief medical officer of the island, said that those who wanted to be vaccinated would have to wait for two days after vaccination before exiting the island as well, because of vaccination side-effects such as “wooziness,” Gonsalves added.

Prime Minister Gonsalves also said evacuees in government-operated shelters would also have to be vaccinated against the coronavirus. “We are strongly recommending that you be vaccinated for your own health and for that of the other persons in the shelters. We don’t want to have an outbreak of COVID in the shelters,” he said.

Gonsalves re-stated the vaccination mandate for rescue on Saturday when he told reporters that, “the countries which will want to receive them – they will either have to be vaccinated here or there – because naturally, if people are going to welcome you at a time of COVID they would wish you to have the highest level of protection.”

St. Lucia had said that it was not necessary for people to be vaccinated to come from St. Vincent, but Gonsalves said that they may be required to get vaccinated on the neighboring island once they arrived.

A large eruption from the volcano on Saturday swept out power lines leaving many of the island’s 110,000 residents without power and water, according to the National Emergency Management Organisation (NEMO) of St. Vincent and the Grenadines.

“The volcano continues to erupt explosively and has now begun to generate pyroclastic density currents,” NEMO tweeted on Monday.

Pyroclastic currents are a “high-density mix of hot lava blocks, pumice, ash and volcanic gas. They move at very high speed down volcanic slopes, typically following valleys,” according to the US Geological Survey, destroying “nearly everything in their path.”

“If you witness a pyroclastic flow, run in the opposite direction as quickly as possible,” the USGS states.

“Explosions and accompanying ashfall, of similar or larger magnitude, are likely to continue to occur over the next few days,” NEMO said Monday.

La Soufrière last erupted in 1979 without reports of injury, but a 1902 eruptoon killed nearly 1,700 people.

So far, most of the island’s residents have remained on the island, perhaps in part due to fear of forced vaccination. The coronavirus vaccines are still in clinical trials and in the U.S. has Emergency Use Authorization only.

“People are very scared of the vaccine and they opt out of coming to a shelter because eventually they would have to adhere to the protocol,” opposition senator Shevern John said, according to a Reuters report.

Gonsalves told reporters that his country would be using funds from the World Bank to pay for some of the disaster relief.

Human rights groups had not responded to the vaccination mandate for rescue on the island by Monday. Amnesty International did not respond immediately for comment.

Vance Gulliksen of Carnival’s media relations department told LifeSiteNews: “Carnival has not made vaccines a requirement of this humanitarian mission. Government officials in St. Vincent have offered to do their best to make sure all who board our ships will be tested and vaccinated but that is at their initiative.”

Some people expressed shock at the apparently government-mandated vaccination policy for those in crisis, however. Pennsylvania state representative David Rowe posted a message about it on Facebook.

“I have always been pro-vaccine and frankly I think the COVID vaccines are beneficial and have thus far proven to be effective,” Rowe wrote. “But this preferential treatment of populations facing imminent harm and even death — it is absolutely insane. We need to stop this in its tracks and treat all people equally while PROTECTING their medical privacy.”