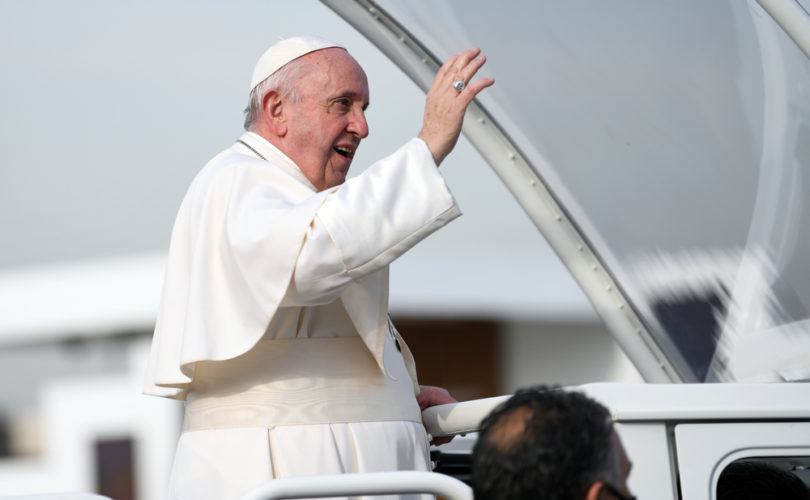 Pope Francis during his visit to Iraq, March 2021.Jon_photographi/Shutterstock

Slovakia, July 23, 2021 (LifeSiteNews) – Only people who have received coronavirus vaccines may attend Pope Francis’s Mass during his planned visit in Slovakia this September, according to the country’s health minister.

Slovakian health minister Vladimír Lengvarský announced during a press conference on July 20 that a decision was made in cooperation with the Slovakian bishops’ conference to demand “full vaccination” as “the condition for participation in Holy Masses and other events.”

Both the president of the bishops’ conference, Archbishop Stanislav Zvolenský, and Lengvarský framed the decision as a way to help “as many people” as possible attend papal events.

Slovakia’s COVID-19 restrictions limit event attendance to 1,000 people, and “permitting only the vaccinated to attend will reportedly allow this cap to be raised for meetings during Pope Francis’ visit,” according to Catholic News Agency.

“We have been informed that, from the point of view of security and technical possibilities, this is the only realistic way not to radically limit the number of participants” at papal events, said Zvolenský, according to the Slovakian bishops’ conference website.

Only 34.7 percent of Slovakia’s population is fully vaccinated with an experimental coronavirus vaccine as of July 22, according to the John Hopkins University Coronavirus Center. At least another 6 percent of the population have received a first dose of the COVID-19 shot.

Pope Francis plans to take part in an ecumenical meeting with Christian leaders, as well as meet with political authorities and the Jewish community during his visit from September 12 to September 15. He will also celebrate a Divine Liturgy in the Byzantine rite, as well as a Mass for the Feast of Our Lady of Sorrows.

The Slovakian bishops have published an official website for the visit, as well as a logo.

The announcement of the vaccine requirement for attendance at a Papal Mass is not only unprecedented, it contravenes the Catholic Church’s Code of Canon Law.

Denial of attendance at the Holy Sacrifice of the Mass is a violation of Canon 843 of the Code of Canon Law, which states that “Sacred ministers cannot deny the sacraments to those who seek them at appropriate times, are properly disposed, and are not prohibited by law from receiving them.”

While vaccination is currently not required to attend Papal Audiences or Papal Masses in the Vatican City State, the State triggered backlash in February when it threatened to fire Vatican employees who did not receive the experimental COVID-19 jab. It soon backpedaled, offering “alternative solutions” for work for those who refused the injection.

Francis himself has compared taking such COVID-19 vaccines to a moral duty, stating: “I believe that, ethically, everyone should take the vaccine.” The currently available coronavirus vaccines used material from aborted babies in various stages of development, as many vaccines and medicines do, leading many pro-lifers to conscientiously object to taking them.

— Article continues below Petition —
SIGN: Show Pope Francis the Latin Mass will survive any suppression
Show Petition Text
36219 have signed the petition.
Let's get to 40000!
Thank you for signing this petition!
Add your signature:
Show Petition Text

In addition to pro-lifers who aren’t taking the vaccine because of its connection to abortion, pregnant women worried about miscarriage or birth defects from the vaccine will also be barred from the Papal Mass, as will people who are allergic to ingredients in the vaccine, have a medical condition that prevents them from being eligible for vaccination, or had a dangerous reaction to the first vaccine dose.

In response to news of the vaccine requirement for the Papal Mass on Twitter, one person said, “They will all answer for it. A shame and an insult for the saints, the martyrs and for Christ the King who died on the cross. Where there was love now there is hatred and discrimination.”

Another responded, “It is really serious. We are living in the Apocalypse of St. John.”