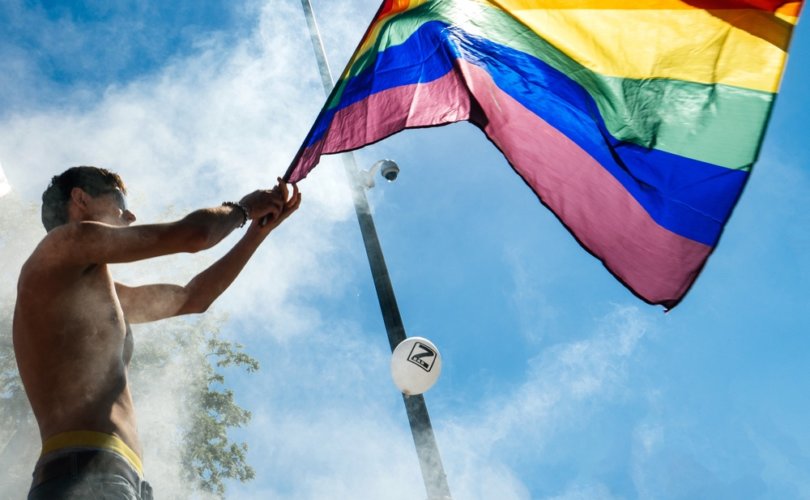 WINDSOR, Ontario, February 25, 2019 (LifeSiteNews) — An Ontario public school board voted last week to force all its elementary schools to fly the pro-homosexual rainbow “pride” flag for at least a week in June.

Greater Essex County District School Board voted nine to one for the motion introduced by vice-chair Julia Burgess, who says flying the rainbow flag during “Pride Month” will show homosexual children the school board supports them, reported the Windsor Star.

“When you’re in elementary school, and you’re just coming into adolescence, it’s a very vulnerable time…You may not have a lot of peers like you. The Pride flag tells them we have their back,” Burgess said.

“This is a commitment to run it up a flagpole,” she said at Tuesday’s board meeting. “It’s a statement that we are going to recognize we’re a diverse, safe, welcoming board.”

The board’s office and high schools have flown the rainbow flag during “pride” month since 2016, reported the Windsor Star.

The lone trustee who opposed the motion, Linda Qin, said schools should be “ideologically neutral” and the board should “be careful to protect all other parents’ feelings,” it reported.

“The kids are so young,” she said. “The flag may make them confused. I wonder if we’re misleading them about the idea of gender. We want to be careful.”

She was cut off by chair Jessica Sartori, according to the Windsor Star.

Trustee Gale Simko-Hatfield voted for the motion but said mandating schools fly the flag is “heavy-handed,” and suggested the board “encourage” it first before requiring it, according to the Star.

“It’s what the community is comfortable with,” she said. “I don’t think we’ve reached out to elementary schools to see what they think.”

Trustee Cathy Cooke said students should be taught what the rainbow flag means as well.

The board also heard an emotional appeal from the mother of a “gender creative” boy now in Grade 4 who has assumed the persona of a girl since he was five.

The Windsor-based school board’s decision appears to be the new normal.

Peel District School Board voted in May to fly the “pride” flag, as well as an Indigenous flag, at all schools the following June, reported Mississauga News.

In June, all @PeelSchools sites and schools will raise the Pride and Indigenous flags, in the spirit of equity, inclusion and reconciliation. #inclusion #peelequity pic.twitter.com/0BiGEvQrf5

The board was lobbied by Pride Employee Resource Group (PERG) and heard emotional appeals in favor of raising the flag from parents of “gender-creative” children and homosexual parents in a May meeting packed with LGBT activists wearing pink.

Similarly, Waterloo Region District School Board has flown rainbow flags outside all its schools during June since 2017.

“We really want to be an open and welcoming site for everybody,” WRDSB superintendent for equity Peter Rubenschuh told the Waterloo Region Record.

“We’re trying to send an explicit message,” he said. “We are a collective.”

The Toronto District School Board sends all schools a “pride” flag for “Pride Month,” and “encourages” schools to fly or display it, according to the TDSB website.

Such flags also fly at schools in the Durham, York, and Halton public school districts, according to the Toronto Star.

Pro-family critics point out the rainbow “pride” flag symbolizes not inclusivity and welcoming, but something far more dark and sinister.

“The Pride flag is offensive, oppressive and traumatic,” according to Kari Simpson, executive director of British Columbia-based Culture Guard.

“For those who hold constitutionally-protected religious beliefs, it is offensive to be confronted with the sexual politics of the loud, aggressive and abusive political movement that the Pride flag represents,” she wrote in a letter opposing the flag flying on B.C.’s ferries.

“Flags and banners are important symbols that claim and establish territory or convey an important message,” noted LifeSiteNews’ Doug Mainwaring.

The so-called pride flag is “a sign of the unabashed brazenness of the ancient enemy of Christ planting his flag wherever he can to claim God’s people for himself,” he pointed out.

“These are not benign symbols: They share a diabolical component.”