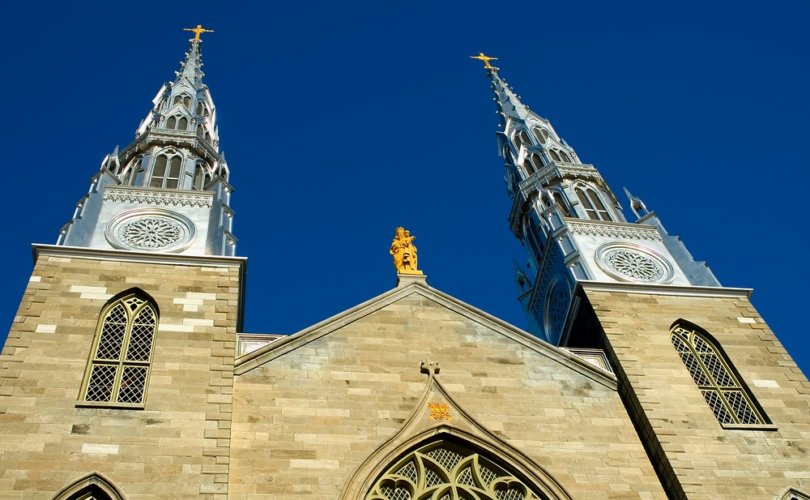 TORONTO, March 25, 2020 (LifeSiteNews) — At least four Ontario Catholic archdioceses — including the province’s largest dioceses of Ottawa and Toronto — have locked their churches indefinitely in the face of the Wuhan flu pandemic even as the province’s pot, beer, and liquor stores remain open.

Premier Doug Ford’s government ordered a mandatory shutdown of all non-essential services that begins at midnight March 24 and will last at least 14 days, and which exempts 74 businesses or services deemed “essential” — including beer stores, the provincial Liquor Control Board of Ontario (LCBO) outlets, and cannabis stores.

But it is not clear at this point exactly what health authority ordered the closure of churches in particular regions, and specifically in Toronto.

Archbishop Terrence Prendergast of Ottawa directed his priests Monday to close down all churches — even for private prayer — in his diocese, citing an order from Dr. Paul Roumeliotis, medical officer of health for the Eastern Ontario Health Unit, who has authority over the counties of Stormont, Dundas and Glengarry; the counties of Prescott-Russell; and the city of Cornwall.

A spokesperson for health minister Christine Elliott confirmed with LifeSiteNews in an email that the province’s chief medical officer did not order Ottawa to shut its churches.

Roumeliotis’s March 22 directive shuts down all “churches, mosques, synagogues and other places of worship,” as well as all daycares, gyms and recreational centers, and personal services settings, such as tattoo and body piercing parlors, manicure spas, and hairdressing salons, within his jurisdiction.

Corporations that violate the order, which does not have an expiration date, could be fined up to $250,000 daily.

Cardinal Thomas Collins of Toronto issued a March 24 directive to his priests to close all churches in his archdiocese immediately.

However, Collins’s statement does not, as does Prendergast’s, refer to an order by a health authority who has jurisdiction over Toronto — which Roumeliotis does not.

Although Elliott’s spokesperson confirmed Tuesday that the province did not order the Ottawa area churches closed, a Canadian Press story published March 25 claimed that it was because of a provincial directive that Collins ordered Toronto churches shut.

LifeSiteNews asked the health minister to confirm if the province ordered the shutdown for Toronto but had not heard back by deadline.

Archdiocese spokesman Neil McCarthy did not answer LifeSiteNews’s question as to what health authority ordered the closure of churches in the Toronto archdiocese, but instead referred to the public statement.

All public Masses were canceled in the Toronto and Ottawa archdioceses March 17, when Ford declared a state of emergency, but up to this point, churches had remained open.

LifeSiteNews asked Roumeliotis in his daily press briefing Tuesday why Catholics could not be allowed to visit the Blessed Sacrament if the parishes could ensure keeping social distancing protocol — particularly when liquor and cannabis stores remain open.

“I do understand and respect the religious approach, but I had to take a stand on these issues that had nothing to do with being anti-religious or anything like that; I’m looking at the public good here,” he added.

Moreover, he doesn’t have “any say about the licensed LCBO and marijuana [stores],” he said.

“Is liquor an essential product? I don’t think so. I don’t drink,” Roumeliotis said. “But I can see the dichotomy there. I see the irony.”

Ford defended keeping Ontario’s pot and liquor stores open at a press conference Tuesday, stating that mental health experts advised the government that access to these substances is necessary for persons with addictions.

“We met and heard … from mental health and addiction that it’s absolutely critical to keep that open,” he told reporters.

“They don’t want to put more of a burden on the health care system. And I know some people at home are sitting back and thinking you know, how…does that work, well, there are people out there with addictions. We’re there to help them, we’re there to support them,” Ford said.

Meanwhile, R.R. Reno, editor of American magazine First Things, criticized the hierarchy in a March 17 column for this response to the coronavirus pandemic.

“Closing churches is utterly unnecessary. People can gather to pray before the reserved sacrament while maintaining the ‘social distancing’ advised by public health experts,” wrote Reno.

“Modest-sized Masses can be conducted in ways that do not irresponsibly risk spreading the virus. The same holds for baptisms and funerals. In some circumstances, pastors can limit attendance to immediate family,” he added.

“But simply suspending the sacraments suggests that the Church lives in accord with the world’s priorities,” which regard “the prospect of death as the supreme evil to be avoided at all costs,” Reno wrote.

“The Church’s concern should be to sustain the spiritual health of those entrusted to her care. Closing churches and cancelling services betrays this duty of spiritual care,” he said.

“In a time of pandemic — a time when Satan whips up in us all fears of isolation, abandonment, and death — churches must not join the stampede of fear.”

To express your concern to the Church, leave messages here: