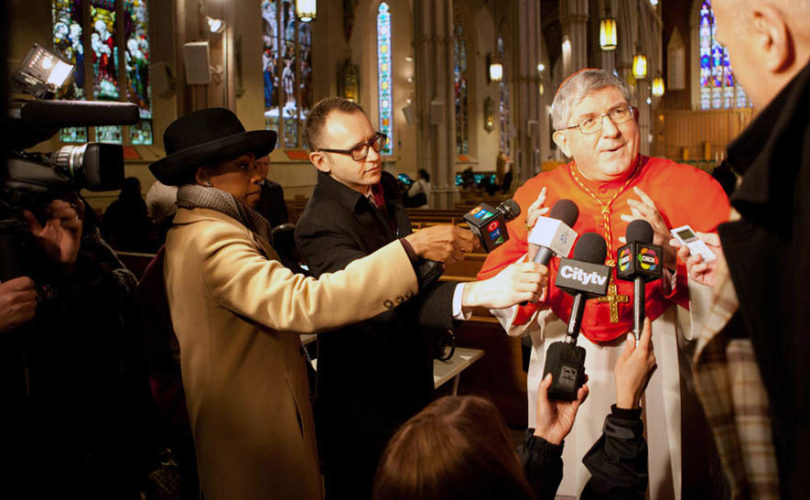 While tens of thousands of Ontario parents are opposing the Liberal government’s updated sex-ed curriculum, the Archdiocese of Toronto headed by Cardinal Thomas Collins has stated (see full text of statement) that schools have a “responsibility to teach the curriculum set out by the Ministry of Education.” It has also been revealed that a Catholic organization in the Archdiocese has been involved in the development of the program by providing “feedback and advice.” These Catholic establishment reactions are in stark contrast to the January 31 statement of Ottawa Archbishop Terrence Prendergast regarding the program.

Education Minister Liz Sandals told LifeSiteNews in a Toronto press conference at the sex-ed’s unveiling this week that the controversial Institute of Catholic Education (ICE), established by the Bishops of Ontario in 1986, is standing firmly behind the update.

When asked if that means the curriculum has received a Catholic endorsement, Sandals replied: “Well, certainly the people that are involved in responsibility for the Catholic education…” but did not complete her thought.

ICE Executive Director Michael Pautler told LifeSiteNews that ICE not only provided the ministry “very general feedback and advice,” but was consulted “most especially, with respect to necessary resources to support the implementation process.”

Meanwhile, the Catholic Civil Rights League (CCRL) has objected to portions of the sex-ed, stating that it “raise[s] explicit issues at earlier ages” and discusses “sexual practices that are sinful to Catholics prior to the time when most children reach puberty.”

Groups opposing the updated sex-ed, including Campaign Life Coalition, Parents as First Educators (PAFE), REAL Women of Canada, and many others, say the curriculum attacks the innocence of children by sexualizing them from the earliest age. Critics also point out what they say is an explicit homosexual agenda in the sex-ed, adding that it will normalize the acceptance of homosexuality and homosexual practices to the up-and-coming generations.

Cardinal Collins, who heads up the Catholic Education efforts for the Ontario bishops conference, has tasked ICE with producing “resources that support Catholic teachers and ensure the curriculum in our classrooms is consistent with our Catholic teachings and appropriate within the context of a Catholic classroom,” a press release from the archdiocese stated yesterday.

There is no indication yet whether the Catholic bishops and institutions involved have also advocated for protection for the well over one million other children and their families in non-Catholic schools from the negative influences of the program.

ICE’s Pautler told LifeSiteNews that while Catholic schools will be using the faith traditions of the Catholic Church as the “starting point” for interpreting  the sex-ed, nevertheless, he admitted that the “core content and expectations” of what ICE will produce will not “vary from that prescribed by the Ministry of Education.”

The sex-ed will be delivered through the Catholic schools’ Fully Alive program, said Pautler. That controversial program, also widely criticized and opposed, was designed by the ICE decades ago under the umbrella of the Assembly of Catholic Bishops of Ontario and was most recently revised in 2012.

“The current program will now be reviewed in light of the recently released Health and Physical Education curriculum, and will be amended or revised as appropriate,” he said.

Pautler said the Ministry is specifically funding the creation of new resources for Catholic schools.

“The Ministry of Education has committed to provide funding to support the development of specific resources and materials that will be appropriate for use in Catholic schools, and will support teachers as they implement the revised curriculum,” he said.

The conflict of interests has not gone unnoticed. “ICE is going to take money from Wynne to develop a little commentary around the evil curriculum which is diametrically opposed to Catholicism!  Wynne won’t pay for anything she disagrees with!” stated one blogger at CatholicIntelligenceBlog.

Pautler did not respond to LifeSiteNews’ question about how he would address parents’ concern that the sex-ed curriculum is too explicit and prematurely sexualizes their children.

An online petition first started on Nov. 1, 2014 by PAFE, demanding an end to the sex-ed changes, has garnered 49,958 (8 p.m. Feb. 26) signatures. A petition launched by LifeSiteNews just yesterday asking Premier Wynne to “immediately stop your plans to implement the newly revised graphic sex-ed curriculum” has zoomed to over 38,080 (8 p.m. Feb. 26) signatures indicating very strong support for the petition statement.

In a press release issued after the new program became public this week, PAFE stated, “Everything people rejected in 2010 in great numbers and with huge anger is back with new additions that will harm and confuse children.”

This is not the first time Cardinal Collins has capitulated on the encroachment of the homosexual agenda into Catholic schools.

In 2012 when the Ontario Liberal government passed the Accepting Schools Act (Bill 13), a bill that among other problematic things forced Catholic schools to allow support clubs for students identifying as ‘gay,’ Cardinal Collins had been secretly negotiating with the government and did not support parents actively opposed to the program. Collins reacted to the bill’s passage by declaring the act is “now the law,” much to the dismay of many organizations and individuals who had been working together for many months to stop the legislation. On the current sex-ed program, Collins tasked ICE to do the same quiet, behind the scenes negotiations on behalf of the bishops.

Cardinal Collins has, however, previously received much praise from faithful Catholics for his responses to the Development and Peace scandals, his public criticism of the Ontario English Catholic Teachers’ Association decision to march in the Gay Pride parade, barring a homosexual priest from speaking in the Archdiocese, his calling Justin Trudeau to account, and many positive changes that he has made in the Toronto archdiocese.

The National Post has reported that parents will not be able to opt their children out of portions of the sex-ed curriculum dealing with the acceptance of new family structures, because of the 2012 anti-bullying bill which has enshrined such portions in Ontario law.

Meanwhile, a different institutional Catholic organization, the Ontario Association of Parents in Catholic Education, has also admitted to being part of the sex-ed consultation process.

President Brian Evoy called the consultation process positive, adding that his organization is “very much in favour of the curriculum and all of the changes that will be made.” He said he is confident that ICE will be able to interpret the sex-ed so it squares with Catholicism.

Ontario MPP and PC leadership candidate Monty McNaughton has been another prominent voice strongly opposing the Wynne sex-ed agenda in the Ontario Legislature and to the public.