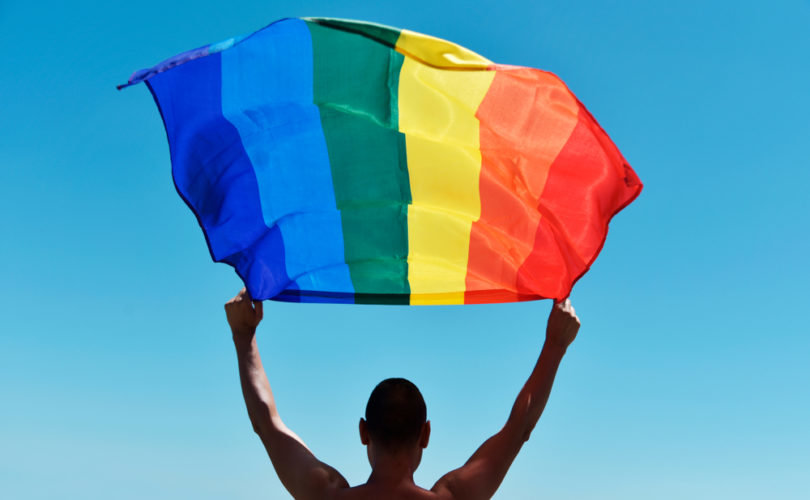 BURLINGTON, Ontario, April 13, 2021 (LifeSiteNews) — A Catholic school board in Ontario will vote next week on a motion to fly the rainbow-colored homosexual pride flag at all board-run schools during the month of June.

Quoting Pope Francis along with LGBT talking points about “equity and inclusion,” the motion calls for the Board’s Director of Education Pat Daly to “direct all HCDSB schools including the Catholic Education Centre to fly the Pride flag during the month of June starting with 2021.”

The motion is expected to be voted on by the Board at their next meeting on April 20. With nine trustees, the motion requires five votes to pass. A tied vote results in a fail.

The HCDSB states on its website that its mission is to provide “excellence in Catholic education by developing Christ-centred individuals enabled to transform society.”

— Article continues below Petition —
PETITION: Reject government control of the internet in Canada
Show Petition Text
6557 have signed the petition.
Let's get to 7500!
Thank you for signing this petition!
Add your signature:
Show Petition Text

LifeSiteNews reached out to Bishop Douglas Crosby of the Diocese of Hamilton — where the HCDSB board is located — to ask if flying the homosexual flag over Catholic schools under his watch is compatible with the Catholic faith. LifeSite also asked if he would strip the HCDSB of its Catholic label if it decides to fly the rainbow flags. No response to a phone call and two email requests was provided by press time.

Jack Fonseca of Canada’s pro-life and pro-family organization Campaign Life Coalition called the Catholic school board’s motion to fly the gay pride flag a “betrayal” of everything it means to be a Catholic school.

“The gay rainbow flag is a political symbol which celebrates sexual sin and rejects the law of God,” he told LifeSiteNews. “It is understood by gay activists and broader society to mean that sodomy is morally acceptable, that homosexual ‘marriage’ is a right, and that Christians who uphold Biblical teaching on homosexuality should be shouted down and purged from society.”

“This flag is also a sign of conquest over the Catholic Church, in the same way that an invader plants his flag on conquered territory to assert his domination over the land and the subjugations of the inhabitants to his will,” he added.

Fonseca said that “under no circumstances should any Catholic school fly this anti-Christian political symbol.”

He said that if the board passes the motion to fly the flag, Bishop Crosby should strip the board of its “Catholic” label.

“It is His Excellency’s right and obligation under Canon Law to ban the Halton board, along with any of its schools, from using the name ‘Catholic’ if it proceeds with this diabolical betrayal of Jesus Christ and his holy Church,” he said.

Fonseca urged parents to contact trustees and demand that they vote down the motion.

Teresa Pierre, President of Parents as First Educators, said that Catholic children would be confused to see a flag raised over their schools that celebrates sexual behavior that the Church sees as wrong.

“Catholic schools need to be clear about the messages they send, so that they consistently teach students the truth about the faith,” she told LifeSiteNews. “Raising a Pride flag suggests approval of sexual relationships that the Church disapproves of.”

Pierre said that the trustees would be “betraying the trust confided in them” by Catholic parents to “hold the faith first and foremost among their concerns” if they were to vote to fly the flag. She pointed out how trustees should take some direction on how to vote from Toronto’s Thomas Cardinal Collins who recently defended a father who spoke out against the Toronto Catholic board raising the pride flag.

“Concerned parents should contact their trustees in the next week and remind them of their obligation to make sure that Catholic schools continue to act as a ‘lamp to the world’ rather than taking their lead from worldly concerns. Parents should tell them that they expect that Halton Catholic schools will express solidarity with the Cardinal and Catholic sexual teaching by not flying the Pride Flag,” Pierre said.

Gwen Landolt, National Vice President of Real Women of Canada, said that flying a gay pride flag at a Catholic school is “absolutely incompatible” with Catholicism.

“Why have a Catholic school if it’s just going to go along with the current political correctness,” she told LifeSiteNews. “The purpose of the Catholic school, according to our 1867 Constitution — which was confirmed in the Charter of Rights — is to promote Catholic teaching.”

Landolt said that trustees who put the motion forward and who vote in favor of it are essentially telling Catholic parents that they “don’t care about Catholic teaching” and have no problem betraying the trust that parents placed in them to make certain that children attending schools governed by the board receive an authentically Catholic education.

“Parents send their children to Catholic schools to learn Catholic teaching. They have been betrayed by the trustees pushing this,” she said.

Last month, a father told the Toronto Catholic District School Board why he was opposed to the rainbow flag flying over a school attended by his children.

“The reason why is simple: because gay pride is not compatible with the Catholic faith. You have a spiritual and moral duty to ensure a compassionate, caring, and loving Catholic environment at our schools,” the father said.

He quoted what the Church teaches about homosexuality.

“The Catechism of the Catholic Church addresses this with three simple paragraphs. Paragraph 2358 says that we must accept the person with ‘respect, compassion, and sensitivity,’” he said. “This is true of course. I’ve seen this section used by lobbyists without quoting its sister paragraphs, 2357 and 2359,” he added. In paragraph 2357, the Catechism calls homosexual acts “intrinsically disordered,” adding that “under no circumstances can they be approved.”

Maillet told the board that groups who support sexual relationships that the Church teaches our wrong have no place in Catholic schools.