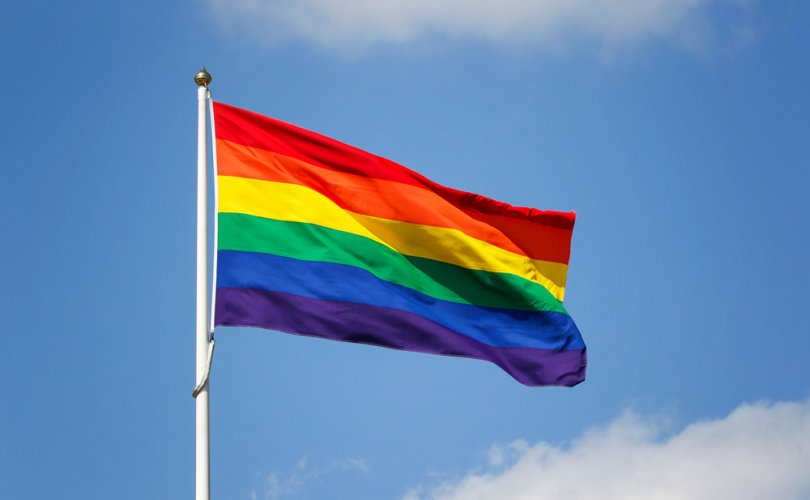 BURLINGTON, Ontario (LifeSiteNews) — An Ontario Catholic school district board voted last month to fly the LGBT pride flag outside all of its schools this coming June to signal support for “pride month,” reversing its decision last April not to raise the rainbow colors.

The Halton Catholic School District Board (HCSDB) in Burlington, Ontario, voted 5­-3 on January 18 to raise the homosexual pride flag this June and every June thereafter, throwing its support behind the LGBT movement.

The following day a message on the HCSDB’s Twitter feed confirmed the outcome of the vote, which was said to have “lasted well into the night,” according to a CHCH report.

“The #HCDSB Board of Trustees just voted to fly the Pride Flag outside of all HCDSB schools and the Catholic Education Centre for the month of June, and each June moving forward,” the tweet read.

The #HCDSB Board of Trustees just voted to fly the Pride Flag outside of all HCDSB schools and the Catholic Education Centre for the month of June, and each June moving forward.#HCDSBPride #WeAllBelong

The resolution states that “as one of the next steps in supporting our Diverse School Communities and to ensure we fully support the pillar of belonging, that the Director of Education direct the Halton Catholic District School Board staff to purchase all necessary elements to fly the Pride flag and to fly the flag for the month of June, every June beginning in 2022 at all Halton Catholic District School Board Schools and the Catholic Education Centre.”

Describing itself as “distinctively Catholic,” the HCDSB website lays out its mission to help each child under its care to begin “living out God’s plan” and that it is “dedicated to providing excellence in Catholic education by developing Christ-centred individuals enabled to transform society.”

However, traditional Catholic doctrine contradicts the position of LGBT pride, holding that homosexual acts are “intrinsically disordered” and that they “do not proceed from a genuine affective and sexual complementarity. Under no circumstances can they be approved.”

Additionally, the term “pride” in salvation history denotes an explicit refusal to follow God and his rule. Raising the pride flag thus flies in the face of the Catholic faith the school purports to uphold.

Last year, as the board considered flying the pride flag during the month of June, the Diocese of Ontario, of which the HCDSB is a part, released the document “To Listen, To Reason and To Propose: The Rainbow Flag & Catholic Schools,” defending the pride flag as representing “diverse people who come together to form something beautiful (the rainbow).”

The document, prepared at the behest of Fr. Cornelius O’Mahony, Episcopal Vicar for Education for the Catholic Partners of the Diocese of Hamilton, justifies its support for the pride movement based on “research” demonstrating that “an inclusive school culture and climate is important for all students to achieve success and personal wellbeing.”

“Evidence has shown that this is especially important for students who are, or who identify as members of the LGBTQ+ community,” the statement reads.

At the time, a spokesman for Canada’s pro-family Campaign Life Coalition told LifeSiteNews that Catholic institutions should not fly the flag since “the gay rainbow flag is a political symbol which celebrates sexual sin and rejects the law of God.”

“It is understood by gay activists and broader society to mean that sodomy is morally acceptable, that homosexual ‘marriage’ is a right, and that Christians who uphold Biblical teaching on homosexuality should be shouted down and purged from society,” the spokesman continued. “This flag is also a sign of conquest over the Catholic Church, in the same way that an invader plants his flag on conquered territory to assert his domination over the land and the subjugations of the inhabitants to his will.”

Although voting against flying the flag last year, the school board nevertheless voted to “raise awareness around Pride month,” instituting “mandatory training” for staff about LGBT-identifying students “to ensure that students in the 2SLGBT community are supported throughout the entire school year.”

LifeSiteNews reached out to the HCSDB for comment on its decision to contravene Catholic morality by supporting the pride movement but received no reply before publication.

LifeSiteNews also reached out to Bishop Douglas Crosby of Ontario, whose jurisdiction the HCDSB falls under, to ask whether he would condemn the school board’s decision, but again did not receive a response in time for publishing.