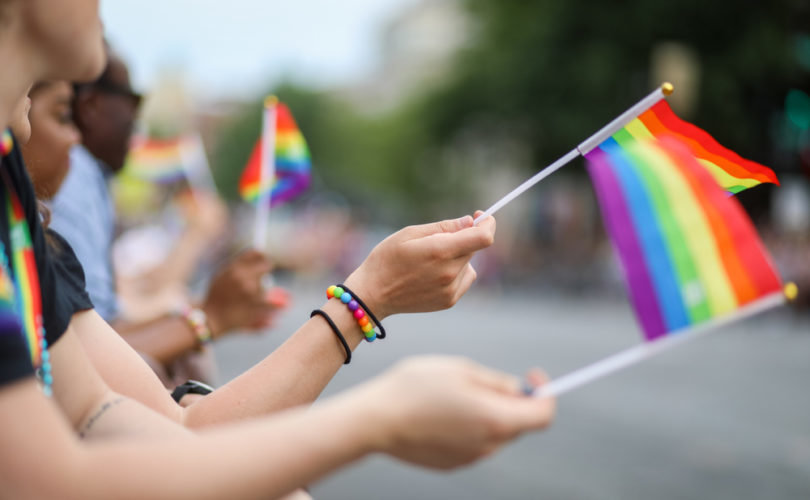 BURLINGTON, Ontario, April 27, 2021 (LifeSiteNews) – A Catholic school board in Ontario decided in an illegal meeting last night that it will not fly the gay pride flag from its Catholic schools.

Instead, Halton Catholic District School Board (HCDSB) trustees decided 7-3 with one abstention that all school staff must undergo “mandatory training” about LGBT students, schools must “raise awareness around Pride month,” and schools must post pro-LGBT signage “to ensure that students in the 2SLGBT community are supported throughout the entire school year.”

“Although there will be no gay pride flag flown, the amended motion represents an even more stunning victory for LGBT activists who’ve hijacked the Catholic Board,” he told LifeSiteNews.

“At the HCDSB, Jesus Christ has been knocked off His throne. In His place, homosexual sin will now be celebrated. The Word of God in the Holy Bible will no longer be exalted. Instead, sodomy and all the permutations of homosexual and transgender lifestyles will be lifted high, adored and glorified in the name of the false gospels of ‘equity’ and ‘inclusion,’” Fonseca added.

Trustee Brenda Agnew’s original motion, presented to the board on April 6, called for the board’s Director of Education Pat Daly to “direct all HCDSB schools including the Catholic Education Centre to fly the Pride flag during the month of June starting with 2021.”

A vote on the motion was delayed last week due to the allotted time for the board meeting being consumed by delegations for and against the motion. An emergency meeting, bypassing the usual procedures and allegedly violating the bylaws for such meetings, was called last night by HCDSB Chair Patrick Murphy. The meeting was filled with drama concerning trustees challenging procedures.

The meeting began with a move from some trustees to have the meeting canceled due to what one trustee called its “illegal” nature.

When it came time to deal with Agnew’s motion to fly the pride flag, trustee Janet O’Hearn Czarnota proposed an amendment that struck out the portion dealing with flying the pride flag and replaced it with three new action items. These included the following:

The remainder of the almost four-hour meeting was taken up by unsuccessful proposals to amend Czarnota’s amendment.

Some highlights of the drama included Trustee Tim O’Brien’s failed attempt to strike out Czarnota’s amendment and his two failed attempts to have the motion indefinitely postponed.

Another dramatic moment happened when Trustee Vincent Iantomasi made the case for flying only the Canadian flag at Catholic schools. “The national flag is an unmistakable symbol of unity of inconclusiveness for all Canadians no matter their sexual orientation race or color. I believe in upholding the dignity of the Canadian flag which means it should always be flown on its own,” he said. Trustee O’Brien later put forward an amendment to the main motion at hand that “only the Canadian flag will fly at any HCDSB schools as well as the Catholic Education Center. His proposal did not move forward, however, when no one seconded it.

In the end, seven trustees voted in favor of the amended motion, three opposed, and one abstained.

Fonseca criticized the amended motion for creating “safe spaces” for students who identify as LGBT that will ultimately not be safe for Catholic students who believe what the Church teaches about the immorality of homosexual practices.

“The real purpose of the so-called ‘safe spaces’ for LGBT students is to make every classroom un-safe for Bible-believing Catholics,” he said.

“Likewise, LGBT activists are giving the name ‘safe space’ to classroom environments that will be hostile and dangerous for traditionalist Catholic students, teachers and staff. Any faithful Catholic believer who might be tempted to defend or explain the Church’s teachings on human sexuality will be publicly condemned and accused of bullying, bigotry and homo/transphobia.”

Fonseca said that inside such LGBT safe spaces, the Catechism of the Catholic Church and many passages from the Bible will be “banned and condemned as ‘hate.’”

“Every classroom in every school will be an unsafe space for the Word of God,” he said.

He also took issue with the “mandatory” LGBT training sessions for staff, principals and teachers.

“They will serve to pulverize any Christian resistance that may yet remain in anyone’s heart. Teachers who are already disaffected Catholics will become more fervent disciples of LGBT ideology. They will be trained to stamp out traditional Catholicism in the name of equity and inclusion,” he said.

Fonseca said that the motion adopted last night is more evidence that the HCDSB is becoming less and less Catholic as it adopts “heretical and even apostate” positions that are contrary to the Catholic faith.

“I’m not sure what faithful Catholics are supposed to do now? Pull their children and homeschool/private school? That’s probably necessary in order to protect your children’s eternal salvation, which will now be at risk, every single day in a Catholic school. Children losing their Christian faith is a very real possibility now. But I don’t know what to say to the poor parents for whom homeschooling is not possible or for whom a private Christian school is unaffordable.”

“How do we move forward? For one, if the Halton Board is worth saving at all, every single one of the trustees who voted in favor of this needs to be replaced in the October 2022 municipal election. Then, a new slate of trustees will have to repeal this policy and invoke Section 93 of the Constitution Act of 1867 in order to cast out all of the ‘equity and inclusive education curriculum’ that has infected the board and served as a false gospel to justify all this evil in our schools.”

May 4, 2021 update: This report now includes information that it was Trustee O’Brien who proposed to amend the motion that only the Canadian flag be flown at TCDSB schools and Catholic Education Center.