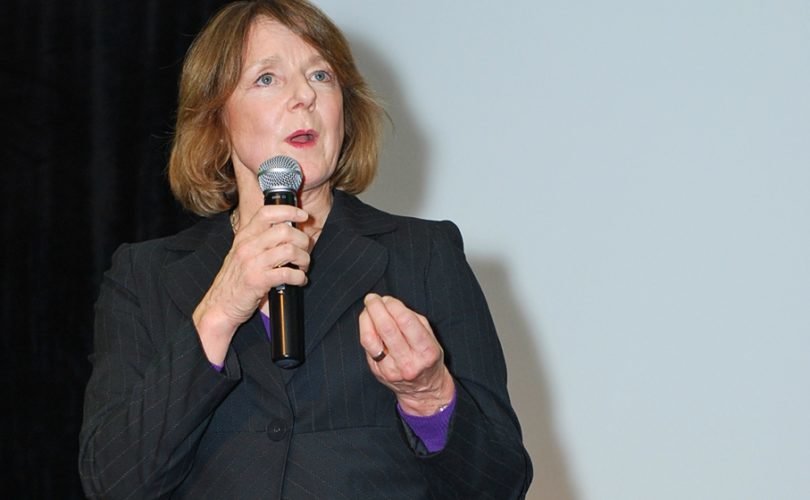 TORONTO, August 19, 2015 (LifeSiteNews) — A Toronto branch of the province’s powerful union of 50,000 Catholic teachers has decided that the Conservative government “should be defeated in the upcoming election” and will go door knocking later this month to support NDP candidates, including one woman who is known for being zealously pro-abortion.

The Toronto Secondary Unit of the Ontario English Catholic Teachers Association (OECTA) announced in its recent newsletter that it will be campaigning for NDP candidates August 29, including outspoken abortion advocate Peggy Nash.

While the NDP is explicitly pro-abortion with leader Tom Mulcair making it clear last year that pro-life candidates will not be admitted into the party’s ranks, some members such as Nash are particularly activist on the issue.

Last October when the Association for Reformed Political Action placed 100,000 flags on Parliament Hill representing the 100,000 lives lost annually to abortion in Canada, Nash tweeted that she was “happy” that “so many” of the country’s mothers were able to have their preborn children killed by abortion.

Happy to live in a country where so many women were able to choose. #canfem pic.twitter.com/ATLd118sF6

In 2011 Nash replied to a Campaign Life Coalition (CLC) questionnaire by reiterating the NDP pro-abortion party policy of supporting “women's right to choose” as well supporting taxpayer-funded abortions. In 2012, Nash voted against MP Stephen Woodworth's principled Motion 312 to study whether a child in the womb is a human being based on the evidence of up-to-date medical science.

Nash has also spoken at various pro-abortion rallies across the country in support of expanding abortion services. In a 2014 rally in New Brunswick she called a woman’s so-called “right” to abortion a “human right” that she would defend “everywhere across the country.”

Nash has been rated by CLC as “not supportable” for being “pro-abortion and anti-traditional marriage.”

Jim Hughes, CLC President, told LifeSiteNews that door knocking for an openly pro-abortion candidate indicates the poor state of Catholicity in the teachers’ union and the schools its members serve.

“It surely indicates the condition of the Catholic schools of Ontario, when they are encouraging support for a political party which has for the past 30 years blocked pro-life candidates and pro-life legislation, which supports abortion on demand, and whose leader, if elected, wants to export abortion to developing countries where abortion is not legal,” he said.

OECTA has a long and troubling history of courting dissent to Catholic teaching and practices. It has blatantly pushed the homosexual agenda in Catholic schools despite opposition from Catholic parents, openly defied the leadership of Toronto’s Cardinal by marching in the city’s homosexual Pride Parade, invited dissident speakers for conferences (here and here), and promoted sex conferences that feature talks on drag queens and sex toys.

LifeSiteNews reached out to the Catholic Archdiocese of Toronto, headed by Thomas Cardinal Collins, for comment but was instead pointed by spokesman Bill Steinburg to a recently released voting guide that he said emphasizes respect for life.

The guide states that Catholics must apply “Catholic moral and social teaching” when voting, and puts “respect for life and human dignity” as the first consideration when choosing whether or not to support a given candidate.

“Choosing life means…demanding the right to life for even the smallest among us – the human embryo and the foetus – since they too belong to the human family,” the document states. “What do the political parties say about these issues? What positions are the candidates taking?”

The Catholic faith holds that ending the life of a preborn baby through abortion is “gravely contrary to the moral law” since every human being deserves the “inalienable right to life.” One strain of Catholic thinking on the matter holds that Catholics cannot in good conscience support a pro-abortion politician since it amounts to what they say is “formal cooperation” in the immorality of abortion.

Cardinal Raymond Burke, while archbishop of St. Louis in 2004, told the faithful that voting for pro-abortion politicians amounted to committing a grave sin in the eyes of the Church, and that if they were to vote for one, they should confess and do penance before receiving Holy Communion.

LifeSiteNews contacted Toronto Secondary Unit OECTA President Dave Szollosy, asking him by phone and email why the Catholic organization he heads is supporting a politician who champions abortion, but did not receive a response by press time.