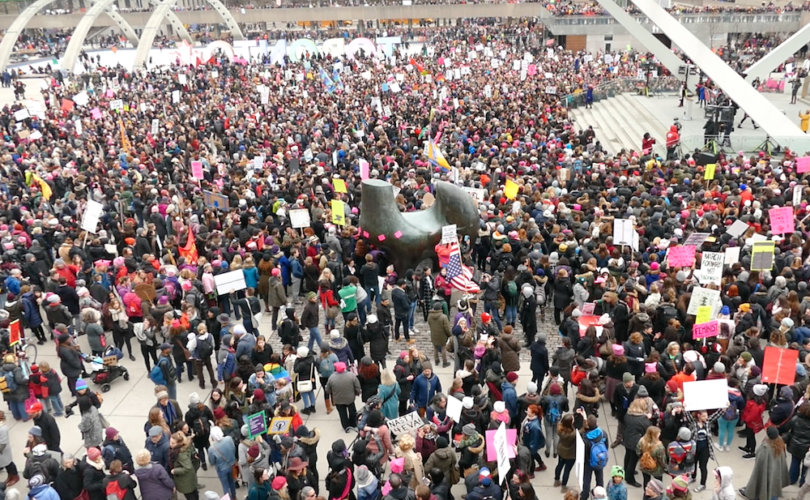 TORONTO, January 24, 2017 (LifeSiteNews) — The president of Ontario’s largest Catholic teachers’ union was at the Women’s March in Toronto tweeting out support for the pro-abortion demonstration.

Hawkins retweeted numerous enthusiastic endorsements of the march, including this explicitly pro-abortion tweet:

Organizers estimated that 50,000 people joined the anti-Trump march from Queens Park to the American Embassy in Toronto’s City Hall. It was one of hundreds of marches across the United States and Canada, as well as in other countries, that coincided with the Washington pro-abortion event.

Organizers confirmed that the Toronto Women’s March endorsed the principles of the Washington March, which is unequivocally pro-abortion, as well as pro-LGBTQ rights.

Denise Hammond told LifeSiteNews that anyone with a pro-life message would not be welcome at the march, as that would be “inconsistent” with the its principles, which are based on “no tolerance for hate.”

“Catholic teachers, of all people, shouldn’t be marching in solidarity with those who believe in killing children,” points out Marie-Claire Bissonnette, Campaign Life Coalition youth coordinator.

“This ‘Women’s March’ is anti-women,” Bissonnette told LifeSiteNews, adding, “I’m ashamed to have been taught by teachers part of any association that marches with those who support killing children in the womb.”

When they go low, we go high! #WomensMarchTO #EqualityforAll pic.twitter.com/2U0Qi9DSzY

Hawkins tweeted from the march: “Please don’t let this be a 1 day event! Stay strong and resilient,” above a retweet by “YA Wednesday”:

“If ever you feel despair over the next 4 yrs, remember today when the world stood together for women's rights and human rights.”

Be loud be proud Wishing the sisterhood success.Canadian women showing they will never be silent or complicit https://t.co/mvllFmYRfJ

Hawkins tweeted above a retweet noting the “LGBTQ page and climate change page taken down from the White House website.

OECTA past president James Ryan defended these as “retweets” in a twitter to-and-fro with “OttawaDaddy.”

Ryan, who as OECTA president marched in the Toronto Pride Parade in 2014, told OttawaDaddy he should have been at the Ottawa Women’s March “supporting our sisters.”

But organizers of the Ottawa March told OttawaDaddy those oppose “reproductive rights” were “banned,” OttawaDaddy tweeted in reply:

OECTA Simcoe also promoted the March for Women in Toronto on Twitter: Join us on Saturday, January 21 2017 at Queen's Park for the Women's March! More details below!

Join us on Saturday, January 21 2017 at Queen's Park for the Women's March! More details below! pic.twitter.com/bVtG9K8V9z

Many in ���� are marching in solidarity with the #WomensMarch on Washington Jan 21 Find a rally near you https://t.co/RnBuGf5fs5 #WhyWeMarch pic.twitter.com/z3djBXCmJC

Proud to be one of the 60,000 in Toronto today. #WomensMarchTO #Peaceful #Toronto #HumanRights #EqualityforAll pic.twitter.com/kti0tbp5jz

The resolutions ask that OECTA adopt a bylaw encouraging members to initiate “Life Teams” in Catholic schools and that teachers recognize the annual 40 Days for Life and Ottawa March for Life as ways to makes students more aware of the “continuing threats to the right to life.”

One self-proclaimed Catholic explicitly declaring for abortion was welcomed at the March.

Rosemary Ganley came from Peterborough to carry her “Catholics for Free Choice” banner.

Co-editor of the now defunct ultra-liberal Catholic New Times, Ganley claimed that under Canon law, Catholics are excommunicated for procuring an abortion or performing one, “but not if you advocate for choice.”

Jesuit Fr. Jack Costello also marched Saturday. Costello is the former interim president and currently an instructor at Regis College, the Jesuit school of theology affiliated with the University of Toronto.