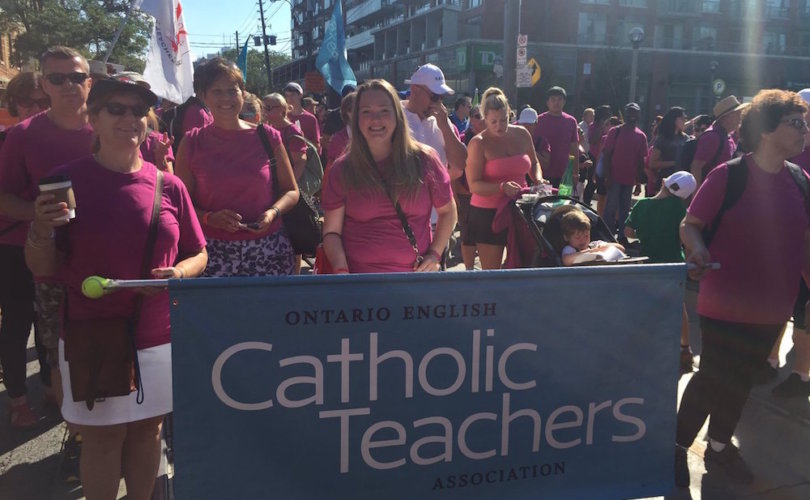 TORONTO, February 15, 2017 (LifeSiteNews) — The president of Ontario’s Catholic teachers’ union has put her name to a letter addressed to Prime Minister Justin Trudeau demanding that he ensure “access to abortion” for Canadian women.

The January 25 letter, created by Canadian Feminist Alliance for International Action, asks Trudeau to “implement, fully and without delay, the recommendations of the United Nations Committee on the Elimination of Discrimination against Women [CEDAW].”

In the letter’s summary of CEDAW’s recommendations that cover what the feminist authors call a “wide range of issues crucial to women’s advancement” is “access to abortion.”

Near the end of the letter under the header “Supported and endorsed by” is the name “Ontario English Catholic Teachers’ Association” (OECTA).

OECTA’s president Ann Hawkins is further listed as an “individual” who specifically endorsed the letter. Hawkins, who became OECTA president for a two-year term in 2015, is described on the union’s website as “passionate” about women’s issues and human rights.

States the letter: “The Government raised the spirits of Canadian women by declaring itself feminist and embracing equality for women as a core value…We now look to you to begin the hard and detailed work of improving Canada’s record and introducing concrete measures that will make equality for women a reality.”

The Liberal government under Trudeau’s leadership is pro-abortion.

The Catholic Church calls abortion a “moral evil” since it is the “deliberate murder of an innocent person.” The fifth commandment “forbids direct and intentional killing as gravely sinful. The murderer and those who cooperate voluntarily in murder commit a sin that cries out to heaven for vengeance,” states the Catechism of the Catholic Church.

“Unfortunately, nothing that comes from OECTA surprises me anymore, but I am terribly disappointed that they have taken this position,” he added.

The Catholic teachers union, representing about 45,000 members, has a lengthy history using its political clout to advocate for causes and positions contrary to Catholic teachings.

It has endorsed and participated in the pro-abortion Women’s March. It has campaigned for pro-abortion political candidates. It has marched in Toronto’s homosexual Pride Parade. It has encouraged its members to attend the Peoples Social Forum, a political networking conference characterized by Marxist, anti-Israel, and pro-LGBTQ activism. It has thrown its weight behind the province’s pro-homosexual sexual education program.

LifeSiteNews reached out to OECTA president Hawkins by phone asking about the union’s support for abortion, but did not receive a response by press time.

Hughes said that he has asked members of the Catholic hierarchy in Ontario to do something about OECTA’s public dissent from Catholic teaching, but with little results.

In 2014 Thunder Bay Bishop Fred Colli joined Cardinal Collins in gcriticizing OECTA for marching in Toronto’s WorldPride parade. Colli said it caused “confusion,” while Collins said it showed an “inadequate and mistaken understanding of their faith.”

“What we need is somebody like the former Bishop of Calgary Fred Henry. When asked if he would apologize for calling the province's new LGBTQ guidelines 'totalitarian' and 'anti-Catholic,' Henry said, ‘That's simply not going to happen.' He defended Catholic schools by making a strong statement and then standing by it. We need more of that,” Hughes said.