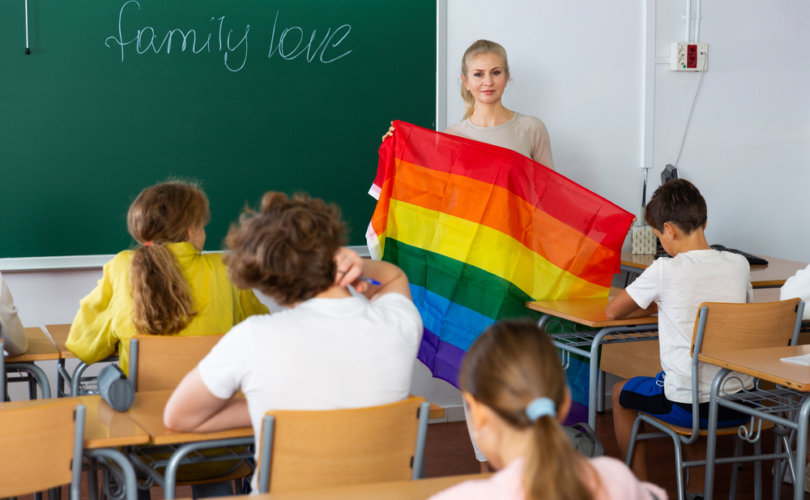 The teachers are invited to study three books during July and August.

The first is Robin DiAngelo’s White Fragility:Why It’s So Hard for White People to Talk About Racism.

Join us for thoughtful discussions delving into the nuances of racial inequity and constructive approaches to cross-racial dialogue.

The synopsis of the book includes a reference to “white people” as a whole, without making distinctions between the hundreds of millions of people worldwide who could be considered white.

According to the publisher: “… white fragility is characterized by emotions such as anger, fear, and guilt, and by behaviors including argumentation and silence.”

— Article continues below Petition —
PETITION: Trudeau must apologize for "mass grave" smear that led to church-burnings
Show Petition Text
4776 have signed the petition.
Let's get to 5000!
Thank you for signing this petition!
Add your signature:
Show Petition Text

The book has not been received well across the liberal spectrum; left-leaning The Atlantic published a critical article about the book in 2020 entitled “The Dehumanizing Condescension of White Fragility.”

The ideas in the book were called “pernicious” and “disconnected from reality.” The writer agrees with DiAngelo that “all people have a racist bias,” but his criticism of her work was harsh nonetheless.

DiAngelo has been identified as a pusher of CRT by the Heritage Foundation, which is an ideology that asserts that “American culture is a conspiracy to perpetuate white supremacy by imposing white concepts on people of other races.”

Another CRT proponent is Ibram X. Kendi, the author of the second book promoted by OECTA for study. It is called How to Be an Anti-Racist.

Next on our Summer Book Club list is “How to be an Antiracist.”

Ibram X. Kendi recounts his journey to becoming an antiracist, sharing ineffable & indispensable musings on what it means to fight against racial inequality.

The third book offered to OECTA teachers for study is Laurie Frankel’s This is How It Always Is. This book explores themes of “gender identity, transgender, and gender non-conforming.”

“This Is How It Always Is” by Laurie Frankel is a fictional tale following a dysfunctional yet lovable family’s complex journey in caring for their transgender child – a contemporary parable both emotive and pragmatic in scope.https://t.co/BDYTFsfrmq pic.twitter.com/sEn49H39MT

The novel is a fictitious story based on the real life experience of the author. According to the New York Times: “Laurie Frankel has a son who, in first grade, decided he was a girl. Her new novel, “This Is How It Always Is,” centers on a young boy who decides he is a girl.”

In the story, the older brother is portrayed as homophobic for not embracing the gender dysphoria of his younger brother.

Pope Francis has affirmed the Church’s teaching against the promotion of LGBT ideologies including transgenderism. In the 2019 document Male and Female He Created Them, Pope Francis’ Congregation for Catholic Education stated: “Catholic educators are called to go beyond all ideological reductionism or homologizing relativism by remaining faithful to their own gospel-based identity.”

In 2016 Pope Francis called transgender ideology “terrible” and a form of “ideological colonization.” And in 2015 he said that “gender theory… does not recognize the order of creation.”

LifeSiteNews contacted OECTA to inquire as to whether the organization will now, as part of their response to the CRT readers, advocate for discrimination. We have not yet received a reply.