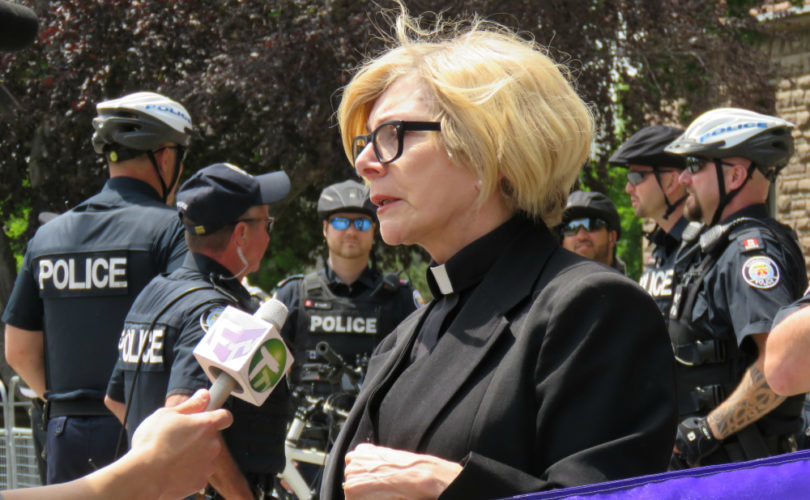 TORONTO, November 23, 2018 (LifeSiteNews) – A pro-LGBT former politician who is also a United Church minister was invited by a Catholic teachers union in Ontario to its inaugural “Fempower” women's leadership conference.

Former Ontario New Democratic MPP Cheri DiNovo, the architect of the Trans Day of Remembrance Act and the pastor who performed the first legal same-sex “marriage” in North America, was a guest of honor at the Ontario English Catholic Teachers' Association (OECTA) event in Toronto this week.

Wearing a Roman collar, DiNovo was part of the panel scheduled to discuss The Advancement of Women in Leadership and the #MeToo Movement.

No men were to be allowed into the conference.

The event's program, carefully catering the transgender movement and political correctness, noted the event was open only to the union's members “who identify as female.”

On Twitter, DiNovo's appearance at the event was confirmed by a tweet sent out from the union, who described her as the person who “passed more pro-LGBTQ legislation that anyone in Canadian history, and even performed the first legalized same sex marriage in North America.”

The union would not comment on the suitability of DiNovo's appearance at an event hosted by an organization supposedly espousing Catholic beliefs. OECTA office staff referred a media request to the director of communications, Michelle Despault.

Despault, though, was not in the office. Her cell phone would not accept voicemail messages.

She was noted on the Fempower program as the person organizing a workshop entitled “You Are A Badass! Stop Doubting Your Worth And Start Living An Amazing Life!”

On the union's website, it states that the organization represents almost 45,000 Catholic teachers in kindergarten to Grade 12 classrooms in Ontario and claims to “promote the principles of Catholic education.”

A former street kid, DiNovo has admitted to smuggling LSD from California in hollowed-out Bibles. A bisexual, she identifies as “queer,” was a signatory to the We Demand gay liberation manifesto, and is said to have performed the first legal same-sex “marriage” in Canada in 2001.

DiNovo is the author of Qu(e)erying Evangelism, the second book in the Center for Lesbian and Gay Studies in Religion and Ministry series.

Backed by then-Premier Kathleen Wynne, who is openly homosexual, DiNovo's Affirming Sexual Orientation and Gender Identity Act was passed with all-party support. That banned conversion therapy, which tries to turn gay youth straight or stop young people from embracing a gender identity different from their biological sex, in Ontario.

Despite evidence provided by psychiatrist Dr. Joseph Berger that same-sex attraction can be successfully treated, DiNovo dismissed reparative therapy as “abusive” in an interview with LifeSiteNews three years ago.

That same year, DiNovo showed up at a rally to promote Ontario's permissive sex-ed curriculum and told reporters that children should know “it's OK to be gay.”

In the Catholic teachers’ union’s tweet, it said it was “honoured” to have DiNovo as a panelist at Fempower 2018.