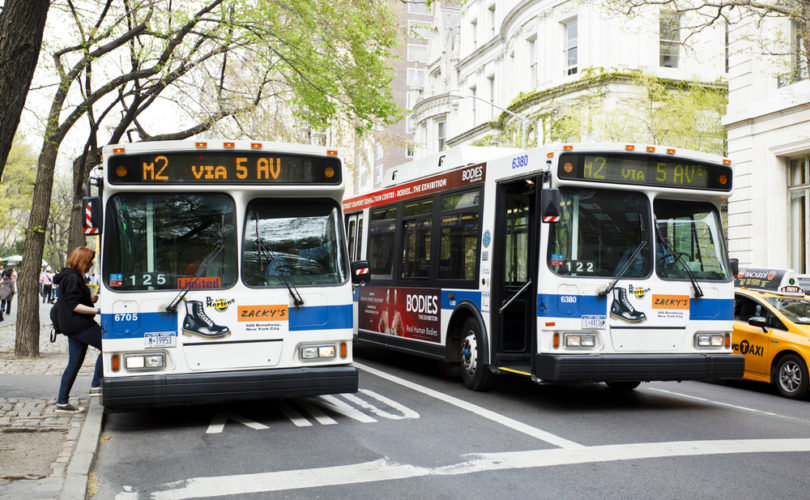 PETERBOROUGH, Ontario, February 29, 2016 (LifeSiteNews) — The City of Peterborough says that to ban a pro-life advocacy group’s advertising on city buses would violate the group’s Charter rights of freedom of expression.

“Freedom of expression is a protected right under the Charter,” noted a city statement released February 26, “and as a government entity, the City must respect the freedom of expression of those seeking to advertise on City property, including on City buses.”

The city initially refused to run the Canadian Centre for Bioethical Reform’s bus ads, which depict three circles, two with images of children in utero at seven and sixteen weeks gestation, with the words, “growing, growing”  and a final circle of red with only the word “gone.”

However, Peterborough reversed that ruling on February 22, the day before the CCBR challenged that decision in court, and explained its change of heart in the statement released four days later.

The CCBR ads were first refused because city councillors believed they “could be divisive or controversial” and might “undermine the City’s objective of increasing ridership.”

However, after discussions with CCBR, the City realized that “advocacy advertisement is expressive speech” protected by the Charter, and refusing to run CCBR’s ads was “not justified.”

And CCBR applied to run the bus ads in a number of municipalities, but were rejected by all of them, noted CCBR’s Nicholas McLeod. The pro-life group has now launched legal challenges against several of these cities.

Meanwhile, the City of Peterborough directed transit patrons who are disturbed by the ads to contact CCBR directly, noting that the city “has no legal authority to decline advertising content.”

The City of Peterborough’s full statement:

“The Canadian Centre for Bioethical Reform (the CCBR), a pro-life advocacy group, recently sought judicial review of the City’s decision to decline the CCBR’s request to run a specific advocacy advertisement on City buses.  The City believed the proposed advertisement could be divisive or controversial and might undermine the City’s objective of increasing ridership and providing an important service to all residents.

“On further review and discussion with the CCBR, the City acknowledged that advocacy advertisement is expressive speech entitled to protection under s. 2(b) of the Charter, subject only to such reasonable limits prescribed by law as can be justified in a free and democratic society. The City concluded that limits on the specific advertisement submitted by CCBR were not justified, in this instance. The Supreme Court of Canada has consistently refused to take into account the content of the speech when ruling on cases under section 2(b) of the Charter, on the basis that controversial and even unpopular communications are often those most in need of protection.

“As a transparent public organization, the City continues to uphold the laws of our country while we work to provide the best possible customer service. We hope concerned customers understand that within defined limits, the City has no legal authority to decline advertising content. Accordingly, we ask customers with feedback regarding a particular advertisement to contact the advertiser directly. In this case, the advertiser is the Canadian Centre for Bio-Ethical Reform: telephone 403-539-2227 or email [email protected]