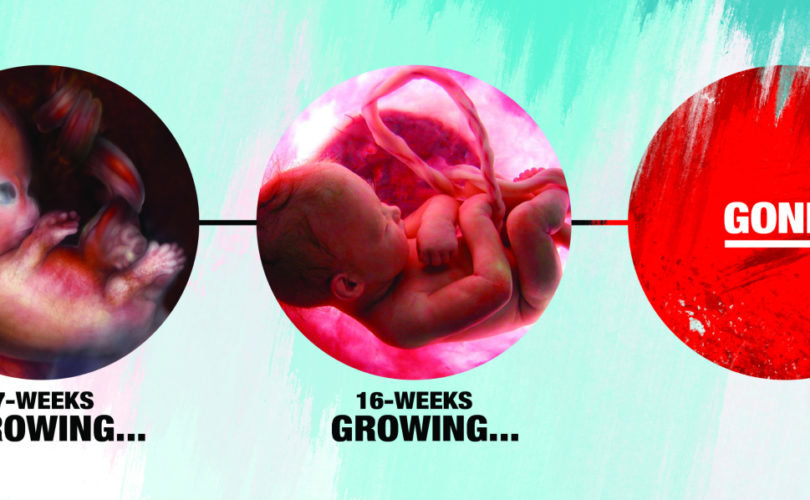 PETERBOROUGH, Ontario, Feb.22. 2016 (LifeSiteNews) – On the eve of a constitutional challenge in court, the City of Peterborough has agreed to run pro-life ads on its buses from the Canadian Centre  for Bioethical Reform, in what could set the pattern for other cities which have likewise rejected the ads.

On Tuesday, the CCBR will appear in court to seek a judicial declaration that the city was violating its Charter rights to speech and expression.

“The City of Peterborough violated our Charter  Rights pure and simple,” said CCBR’s law director Nicholas McLeod. He told LifeSiteNews the CCBR applied to several municipal transit authorities to run the ads, which show three circles containing images of unborn babies at seven weeks and 16 weeks over the words, “growing, growing” and finally just a field of red containing the word “Gone.”

All the cities rejected the ads, and several have been challenged by the CCBR, with Peterborough’s being the first case to come to court.

Peterborough initially defended the rejection on the grounds the ads would “promote an issue which is divisive or controversial,” and which create the impression the city was “taking a position on matters which have, or appear to have a moral, religious or ethical component.”

CCBR lawyer Carol Crosson told LifeSiteNews that “everybody benefits when freedom of expression and speech is defended. Without it democracy cannot grow.”  The CCBR is still going after a court ruling on Tuesday  in order to establish the principle for CCBR’s other bus cases.

“It will help in the future,” Crosson said, even though the court’s ruling will have precedential force only in one area of Ontario. “Every case is different,” she said, in terms of civic regulations and the content of ads.

Nonetheless, in 2009 the Supreme Court of Canada decided in the Greater Vancouver case that public buses were “protected ground” as far as Charter freedoms of speech and expression are concerned, and bus authorities could not ban political ads because of their content.

The CCBR is so often in court with its graphic advertisements and its efforts to display them on university campuses in league with local pro-life students that it decided to start its own legal department, and hire Crosson. Now the CCBR defends other organizations too.

“We are establishing a legal bulwark for all pro-lifers as governments in Canada make it harder and harder to get the truth out.” McLeod added that there is widespread ignorance of what freedom of speech and expression amounts to, and judges are generally sympathetic to pro-abortion groups and abortion clinic operators when they seek constraints.

Though Peterborough’s change of heart does not automatically confer victory in court tomorrow, McLeod said, “It does give us hope.”