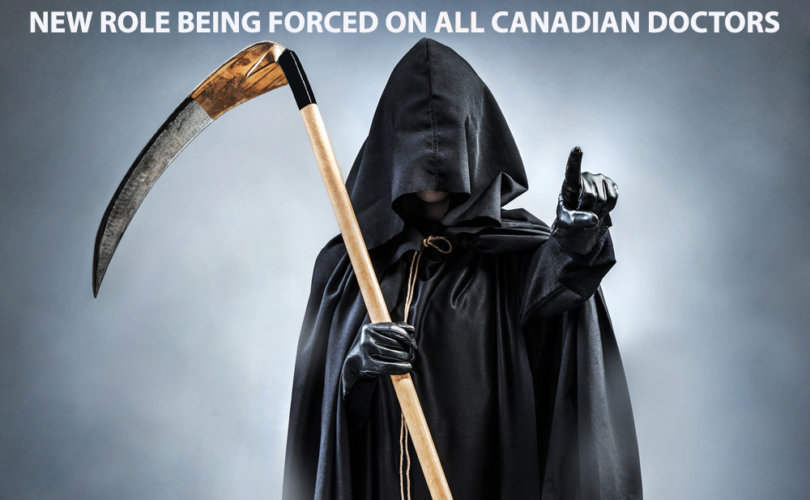 TORONTO, January 31, 2018 (LifeSiteNews) – An Ontario Court ruled today that doctors who oppose euthanasia must nevertheless act contrary to their beliefs and refer patients making a euthanasia request to a physician who will end their lives.

Critics say the ruling puts physicians in an “impossible position” and has ramifications for Charter rights of freedom of religion and conscience for all Ontario citizens.

Three justices of the Ontario Superior Court unanimously agreed Wednesday that the College of Physicians and Surgeons of Ontario (CPSO) policy requiring doctors to “effectively” refer patients for medical practices they conscientiously object to — notably euthanasia and abortion — does, in fact, violate their Charter right to religious freedom.

But the court ruled that in light of the goal of “ensuring access to health care” the CPSO effective referral policy presents “reasonable limit on religious freedom, demonstrably justified in a free and democratic society.”

An effective referral is one to an accessible colleague who is willing to provide the morally objectionable “procedure.”

The 46-page decision, written by Justice Herman Wilton-Siegal in concurrence with Justices Richard Lococo and Wendy Matheson, held that “the evidence in the record establishes a real risk of a deprivation of equitable access to health care, particularly on the part of the more vulnerable members of our society, in the absence of the effective referral requirements.”

The ruling noted that while the CPSO policies are “not trivial” and “may require an accommodation” on the doctors’ part, they do not “extend to deprivation of the ability to practice medicine in Ontario.”

But that’s not true, say the doctors who took the CPSO to court, and who denounced the January 31 ruling in a joint press release Wednesday.

The court’s decision puts doctors “who entered the field of medicine to provide quality, compassionate, and patient-centered care” in “an impossible position,” said Dr. Ryan Wilson, president of the Canadian Physicians for Life (CPL).

CPL joined the Canadian Federation of Catholic Physicians’ Societies (CFCPS), the Christian Medical and Dental Society of Canada (CMDSC) and five Christian doctors to launch the Charter challenge, which was argued in Toronto over three days last June.

The lengthy hearing was necessary to allow for eight intervenors.

The ruling confirms for many doctors that their “religious and conscience rights are being violated and they won’t be able to practice medicine in Ontario,” Wilson said.

“This is a significant loss for the entire health care system in the province and will have a direct impact on patient care,” he warned. “Ultimately it is patient care that suffers, as our doctors will retire early, relocate, or change fields.”

This was echoed by CFCPS president Dr. Jim Lane.

“This decision forces many Ontario doctors to be unable to care for their patients. This decision also raises alarm bells to all health care workers and Ontario residents that their freedom of religion and conscience could also be jeopardized,” he said.

Larry Worthen, executive director of the CMDSC, noted the ruling underscores the increasing marginalization of Christians in Canadian society.

“Canada represents itself on the world stage as being a cultural mosaic. This is evidence that we are losing sight of that reality,” Worthen said. “To say we respect all cultures and beliefs, we need to respect their strongly held moral convictions.”

Worthen also pointed to apparent inconsistencies in the judgment.

The court “held that other jurisdictions had chosen less restrictive means of ensuring access” to the morally objectionable practices such as euthanasia and abortion, that there was “no evidence that conscientious objection ever results in a failure of access” to these practices, and that “the implications for physicians were serious and more than trivial or insubstantial,” he said.

“We are left wondering why an effective referral is necessary,” Worthen added.

The ruling is an “alarming development which places Ontario doctors at the risk of professional complaints for refusing to make such referrals,” says Phil Horgan, president of the Catholic Civil rights League, which intervened in the case.

“We have maintained that the CPSO’s insistence on compelling Ontario physicians to perform an ‘effective referral’ for objectionable procedures does nothing to honour the Charter right of freedom of conscience and religion,” Horgan told LifeSiteNews in an email.

“Requiring someone to participate against their will in ending another person's life is unconscionable in a free and democratic society. Such coercion in any context violates human dignity, an inviolable right which is not extinguished simply because one practices in a regulated profession,” he said.

“It is difficult to comprehend how it could possibly be in the 'public interest' to pressure doctors to either compromise their core ethical convictions or abandon their area of medicine. Neither is a good outcome for Ontario patients, especially in light of the Court's acceptance that 'there is no study or direct evidence that demonstrates that access to health care is, or was, a problem that was caused by physicians objecting on religious or conscientious grounds to the provision of referrals for their patients,” he added.

Worthen says the doctors are “currently reviewing our options regarding an appeal.”