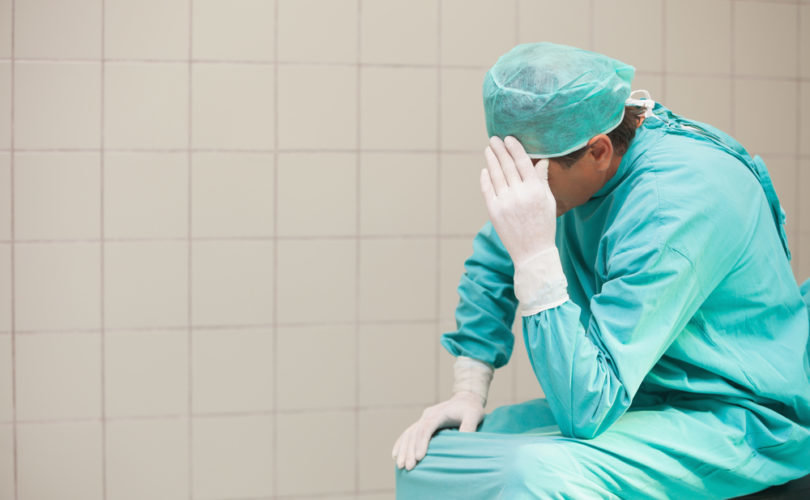 TORONTO, June 16, 2017 (LifeSiteNews) — An Ontario policy that forces doctors to refer patients for euthanasia and abortion, even when it’s against their conscience or religion, was challenged in court this week.

Five Christian doctors and three doctors’ groups argued in court that a policy from the College of Physicians and Surgeons of Ontario (CPSO) violates their Charter rights to freedom of conscience and religion.

The Kathleen Wynne Liberal government intervened on behalf of the college.

The 2015 CPSO policy requires that doctors who object on religious or conscience grounds to providing certain medical “practices” — notably abortion and euthanasia — must give patients seeking these practices an effective referral. This means actively handing over a patient to another colleague who will do the job.

The policy also requires that doctors who do not want to be involved in killing their patients must do so in unspecified “emergency” situations.

Canada legalized assisted suicide and euthanasia in June 2016 at the direction of the Supreme Court, which struck down former laws as unconstitutional the previous year.

Ottawa lawyer Albertos Polizogopoulos challenged the policy during the June 13 to 15 hearing on behalf of the three doctors’ groups, including the Christian Medical and Dental Society of Canada (CMDSC), the Canadian Federation of Catholic Physicians’ Societies (CFCPS), and Canadian Physicians for Life (CPL).

The groups say only Ontario forces conscientiously objecting doctors to give an effective referral, or to actually kill patients themselves in an “emergency.”

“That's what’s so bizarre about the whole thing,” Dr. Jim Lane, president of the Canadian Federation of Catholic Physicians’ Societies, told the CBC.

“There’s been many jurisdictions in the world that have approved assisted suicide, or euthanasia, but none of them have forced their doctors against their conscience to refer or perform these procedures,” he said.

“If a doctor in Ontario is a conscientious objector, the CPSO has stated they may suspend or sanction a doctor that won’t participate in assisted suicide,” said Larry Worthen, Executive Director of the Christian Medical and Dental Society of Canada.

The college has also “aggressively” defended its policy against the court action, Worthen told LifeSiteNews in December.

There are numerous Ontario doctors who conscientiously object to directly or indirectly killing their patients. Of these, 168 have written the CPSO stating they won’t abide by the policy, said Worthen in a Monday press release.

That includes Toronto’s Dr. Mark D’Souza, one of six doctors who does palliative care home visits, but stopped taking new patients in March.

“I will not abandon my current patients but I will not accept new ones until I know my conscience rights as a physician are guaranteed in law,” he said.

D’Souza, a Catholic, told the Toronto Star his personal convictions have “nothing to do with anyone else,” but that he objects to doctors being punished if they don’t cooperate with euthanasia.

The college is arguing that doctors are obliged to provide access to all legal “medical services,” regardless of their personal beliefs.

“At its core, the human rights application calls upon the court to consider whether the self-governing body regulating Ontario's 40,000 physicians can set professional expectations for its members even though some physicians may see those expectations as implicating their Charter rights,” state the college’s court documents.

“It is the college’s position that not only can it do so, it should do so, in furtherance of its duty to regulate the practice of medicine in the interest of Ontario's large and diverse patient population,” it maintains.

“Is it not one of our fundamental precepts in medicine to not abandon our patients?” CPSO president Dr. Dave Roussell told the CBC, adding that a patient “should just be able to ask for a service.”

And when it comes to euthanasia, “it may be a frail, elderly, bedridden patient, perhaps in an institution, and there’s no way that person is going to be able to navigate the system,” Roussell added.

“And if the first doctor they ask turns them away, they may not be able to get access.”

But Worthen’s group says in other jurisdictions where doctors are not compelled to provide an effective referral, patients are not prevented from accessing a doctor who will kill them.

The case is not about access, but “about whether the government can compel physicians to violate their consciences and their sincerely held religious beliefs,” their documents state.

The CPSO policy “forces the applicants and other physicians to be complicit in the taking of human life,” Worthen’s group adds.

His group is asking Ontario to adopt the “Alberta protocol,” Worthen told LifeSiteNews.

In Alberta, objecting doctors can give the number of a care coordination centre which euthanasia-seeking patients can access directly, he explained.

Donato Gogliotta, one of the five physicians bringing the suit, told CBC that doctors could also be disciplined under the CPSO policy for not providing abortion referrals.

“For 30 years, there has been no problem with access for pregnant women who want to terminate their pregnancy, in spite of the fact that referrals were not necessary,” she said. “So this is a deviation from that tradition.”

The 2015 CPSO policy was formulated “under the guidance of a working group and was subjected to external consultations,” the Canadian Press reported.

The principal consultant, however, was the Conscience Research Group, formed in 2010 by euthanasia and abortion rights activist Jocelyn Downie, a Dalhousie University law and medicine professor, who secured federal funding from the Canadian Institute for Health Research.

Downie, a former Canada Research Chair in Health Law and Policy, claimed in a 2006 Canadian Medical Association Journal article she co-authored with Sandra Rodgers that doctors violate the Charter by refusing to effectively refer patients for abortion.

After her claim was refuted by Dr. Jeff Blackmer, then the CMA executive director of ethics, Downie and a group of like-minded academics formed the Conscience Research Group, which operated until 2015, to lobby doctors to their way of thinking.

The group laid out its “model policy” for conscience rights in a 2013 paper titeled “Moving forward in a Clear Conscience,” which Downie co-wrote with University of Western Ontario Philosophy professor Carolyn McLeod and researcher Jacquelyn Shaw.

That document says doctors are obliged under the Charter to provide an effective referral for the act they object to, that is, euthanasia and abortion, and to perform the act itself in emergency situations.

It suggests doctors’ colleges may face interventions from human rights commissions if they fail to adopt this policy.

Meanwhile, a number of groups, including the Catholic Civil Rights League and the Justice Centre for Constitutional Freedoms, intervened on behalf of the doctors’ group at the Toronto hearing, which concluded Thursday.

The three judges reserved their decision, and Worthen told LifeSiteNews it could take from six to twelve months before they issue a ruling.

Meanwhile, the CPSO policy remains in effect, forcing doctors to violate their consciences by performing acts they would rather not.

Editor’s note: A fundraising page has been set up at The Coalition For Healthcare and Conscience to help offset costs of this legal challenge. You can find the page here.