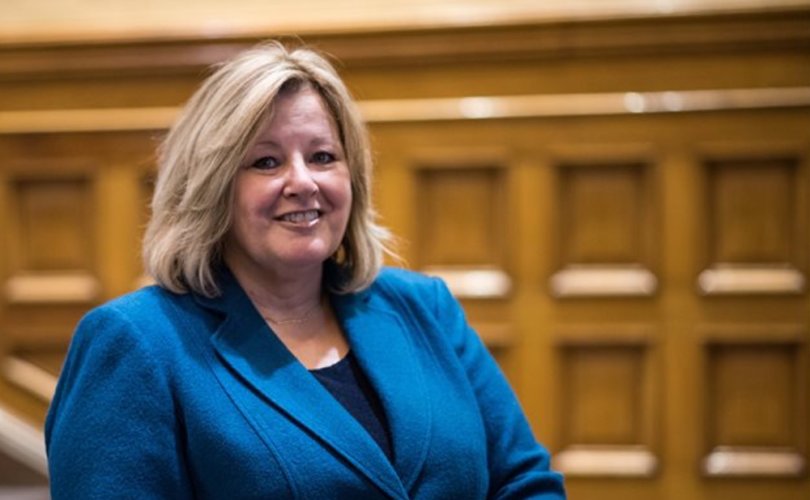 Four representatives of the Canadian Family Alliance (CFA) ripped into MPP Lisa Thompson at a press conference Tuesday, accusing her of a “betrayal of parents” for not scrapping the sex-ed in her seven months as education minister.

“She has one job, and that’s to execute the mandate of the people, given through the voice of the premier and the caucus, and she has failed to do so, and as such, she must go,”  added Granic Allen, who ran as a Progressive Conservative leadership candidate on a sex-ed repeal ticket.

An umbrella association representing 200,000 Ontarians, the CFA is calling supporters to demand Thompson’s immediate resignation, and organizing a rally Queen’s Park on February 20 for that purpose.

LifeSiteNews made repeated attempts to obtain a response from  Thompson, but had not heard back from the minister’s office at deadline.

Thompson’s failure is particularly galling given that Ford’s sex-ed repeal promise was key to his winning both the Progressive Conservative Party leadership and Ontario’s June election, the CFA members contended.

The vow to repeal and replace the sex-ed “definitely played a role in Doug Ford’s huge victory, and in overthrowing the destructive Liberal agenda of Kathleen Wynne,” said Abdul Rauf Jangda of the CFA member Thorncliffe Park Parents Association.

“In the general election, that’s all we heard about,” he told reporters.

“We have over 100,000 supporters in Ontario and everyone was very excited by the prospect of electing a government that would repeal this child-abusive, dangerous sex curriculum from our schools,” Fonseca said.

Thompson has “made a mockery” of Ford’s vow, and put the premier “in the embarrassing situation of looking like he broke his promise to the people,” he added.

Ford’s government is admittedly under intense pressure from the left to drop the promised repeal, Fonseca said.

That includes a legal action by “left-wing Elementary Teachers Federation of Ontario” (ETFO) claiming that repealing the sex-ed is unconstitutional, he told reporters.

Court documents from the ETFO court challenge “have clearly shown that the Wynne sex-ed is still being taught to our children,” Granic Allen charged.

That was echoed by Queenie Yu, leader of the CFA member Stop the New Sex-Ed Agenda Party.

“This past December, at the Superior Court of Justice, Minister Thompson’s Assistant Deputy Minister said: ‘Teachers as professionals can use any particular document they wish as a resource…’ In other words, teachers could use Wynne’s sex-ed as a resource,” Yu said.

Moreover, Ford stated a year ago “that gender identity theory is liberal ideology and that it shouldn’t be forced on the parents and children of Ontario,” she said.

But in July 2018, Thompson “said that students ‘need to learn about gender identity and appreciation’,” added Yu.

“So, in her answer to her very first question as Minister of Education, she contradicted Doug Ford and his multiple campaign promises.”

Campaign Life Coalition has requests of Ford apart from those of the CFA, Fonseca told reporters.

The national pro-life, pro-family lobby group is asking the premier to invoke the Charter’s notwithstanding clause — or in Fonseca’s words, the “judicial activist override provision” — if the court rules against the sex-ed repeal, he said.

Ford previously invoked the clause “to override an activist liberal judge regarding the size of Toronto City council,” added Fonseca.

Campaign Life is also calling on Ford to abolish the Ontario Human Rights Tribunal, which Fonseca described as a “threat to democracy” and a “biased, kangaroo court…stacked with radical feminists, Marxist ideologues, and far-left LGBTTIQ activists.”

PAFE has launched a petition demanding Thompson’s resignation, and Granic Allen, a mother of four, emphasized that the sex-ed repeal is about parental rights.

“The children don’t belong to the government, they belong to the parents,” she said, adding that her father came from a communist country.

“We cannot allow parental rights to be eroded here. We’ve seen in history how that works. It does not turn out well. Why are we going down this path?” Granic Allen said.

The CFA rally demanding Thompson’s resignation will be held Queen’s Park on Wednesday, February 20, from 11:30 a.m. to 1:00 p.m. For more information or to RSVP, go here.