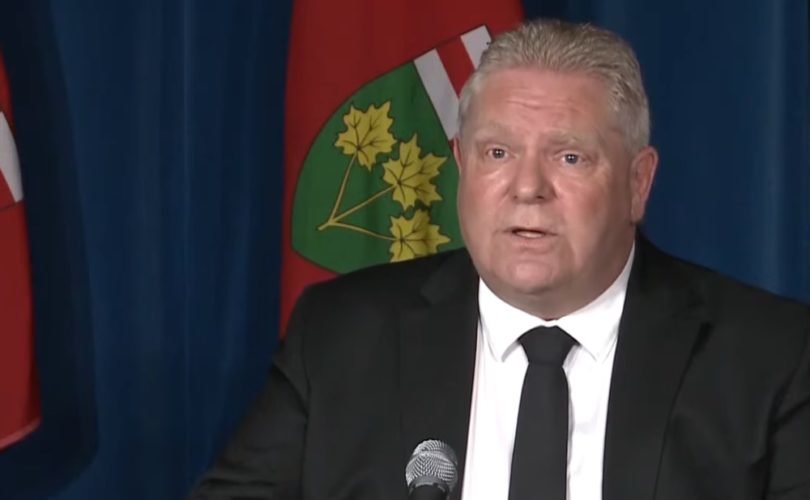 TORONTO, Canada, April 16, 2021 (LifeSiteNews) – Using modeling predictions that have historically proven to be unreliable, the government of Ontario added two more weeks to the already month-long stay-at-home order while burdening citizens with additional restrictive measures that include a 10-person limit at church services, cracking down on travel, closing playgrounds, and stepping up enforcement of rules already in place.

“We have implemented the strictest measures in all of North America,” Premier Doug Ford said this afternoon during a press conference at Queen’s Park where he announced the measures that come into effect on Saturday, April 17 just after midnight.

Places of worship will be capped at a maximum of 10 people indoors, beginning Monday.

Checkpoints will be set up at all of the province’s interprovincial borders with Quebec and Manitoba to clamp down on people trying to enter the province. It is unclear if the new measures will be able to withstand a challenge based on the Canadian Charter of Rights and Freedoms that grants “mobility rights” to citizens.

Big box retail stores will be reduced to operating at 25 percent capacity and playgrounds, basketball courts, golf courts, soccer fields will be closed down.

Ford made it clear that those who do not follow the rules will experience the iron fist of the law.

“For our part, we’re taking decisive action on the ground to dramatically step up enforcement. We have made the difficult but necessary decision to give police and bylaw officers special authorities to enforce public health measures for the duration of the stay-at-home order,” he said.

“Understand the restrictions will be strongly, strongly enforced,” he added.

Solicitor General Sylvia Jones said during the press conference that police have been given the power to stop a vehicle or person and inquire if an individual has a legitimate reason to leave home. “Police will have the authority to require any individual who is not in a place of residence to first provide their purpose for not being at home and provide their address,” she said.

Ontario Member of Parliament (MP) Derek Sloan criticized on Twitter the new powers given to police. Doug Ford, he said, has “just escalated government overreach to a new level, including endowing the police with powers that are well beyond acceptable in a free Canada.”

“Ontario is not a police state!”

The new measures, which are in effect until May 20, come a little over a week after Ford issued a province-wide stay-at-home order that closed non-essential retail stores, continued to restrict church attendance, but allowed schools and garden centers to stay open.

The government claims the new measures are necessary to flatten what they say is the third wave of COVID-19 so that hospitals will not be overrun by new admissions to ICUs (Intensive Care Units). On Thursday, Cabinet was presented with modeling data that painted a doomsday scenario of new infections increasing to as many as 20,000 cases a day by May. Dr. Adalsteinn Brown, the province’s science advisory co-chair, said today that without public health measures, the case count could be 30,000 per day. Health officials reported 4,800 new cases today along with 25 deaths. So far, there have been 7,664 deaths in Ontario attributed to the virus

Commentator Brian Lilley pointed out in an article in the Toronto Sun yesterday that the models have been unreliable in the past. “These types of predictions have been made in the past but failed to materialize,” he said.

“On Feb. 11, as the province was looking to end the last stay-at-home order while keeping Toronto and Peel in lockdown, the Ontario Science Table predicted we would see 18,000 cases a day by the end of March. Instead, Ontario finished the month reporting 2,333 new cases on March 31,” he added.

Yesterday, a group of Canadian politicians held a national news conference on Parliament Hill in Ottawa calling for the end of lockdowns. The group of over 60 elected members from the federal, provincial and municipal levels of government calls itself the “End the Lockdowns Caucus.”

“The use of the lockdown, as experienced in this country, have been disproportionate to protecting us from COVID in relation to the harms that they've caused,” said the host of the event Federal MP Derek Sloan (Hastings-Lennox & Addington) during the conference.

“I believe with the implementation of the lockdowns as we have seen them, we are, in fact, worse off than if we had done more targeted measures to protect the most vulnerable,” he said.

Sloan accused the Trudeau government of a “series of failures” in its handling of the pandemic, including that 1) it did not respond to the threat of the virus right from the beginning by restricting travel from international destinations, 2) it failed to protect the elderly when data showed that the virus targeted them more than anyone else, 3) it failed to proactively make use of promising drugs and vitamin treatments to both prevent and treat the virus, 4) it failed to provide “useful information” that the “virus is far more dangerous for some people than others” which would have done much to “quell the fear that so rampant in our society,” and 5) it failed by providing financial incentives for provinces to “engage in endless blanket lockdowns that quarantine the healthy and the sick alike.”

Sloan said that official government statistics reveal that suicide has currently claimed more lives of young people than the coronavirus.

“We know through Statistics Canada that 95 percent—approximately—of fatalities in Canada due to COVID have been the elderly. Children 19 and under have—rounded to the nearest tenth of a percent, and I got this data this morning— zero point zero (0.0) percent chance of dying from COVID. That data is accurate,” he said.

“As of April 9th, from Government of Canada sources, there have been 7 total deaths of those aged 0-19. We have lost far more kids to suicide than this. Every death is a tragedy. But remember, if we're creating more deaths than those we’re preventing, that is a greater tragedy.”

He pointed out that McMaster Children’s hospital reported last month that children in hospital for treatment after a suicide attempt tripled over a four-month period.

“Lockdowns have costs. We're seeing it in a rapid rise of eating disorders, mental health conditions, addictions, bankruptcies, and more.”

Also present at the press conference was independent MPP Randy Hillier (Lanark-Frontenac-Kingston) who said that the province and the country is “facing the greatest threat that it has ever faced in its existence and in its history.”

Hillier said that public health measures need to be based on real evidence and data, not on “narratives” created by so-called experts.

“But most importantly,” he said, government leaders have lost their “moral compass” which must be regained if “we are ever to regain Canada.”

Also attending the press conference was Maxime Bernier, leader of the People’s Party of Canada. He said that lockdowns have proved to be a failed experiment with devastating consequences.

“In the last 13 months of restrictions, the Prime Minister and provincial premiers have violated our rights and freedoms. We have been living with lockdowns and restrictions that have dictated every aspect of our lives for over a year. It was supposed to be a two-week measure to ‘flatten the curve.’ Never in the history of mankind has a country locked up its entire population to stop the virus. It is a failed experiment and Canadians are paying the price.”

Bernier said that the cure is proving to be worse than the disease.

“Because of these lockdowns and drastic measures, Canadians are dying from canceled surgeries and operations, drug overdose and suicide. Rates of depression have risen dramatically across the country, and our children now suffer immensely. The cure is worse than the disease,” he said.

Bernier said that the Peoples Party of Canada is the only national political party “fighting openly to end these authoritarian lockdowns and fighting against the imposition of vaccine passports.”

“Recently, we've read in the news that the establishment politicians want to impose a vaccine passport. They want to divide us in two categories of citizens: vaccinated ones and unvaccinated people. Vaccinated Canadians would have privileges over unvaccinated. Unvaccinated people won't be able to travel, go to a hockey game, or to a rock concert. They will not be able to participate fully in civil society unless they obey the tyrannical dictates of the establishment,” he said.

“I don't want a ‘show me your papers’ society. We will never accept it. It's not the Canadian way,” he added.

Ontario coronavirus cases supposedly ‘out of control,’ but only 0.15% testing positive