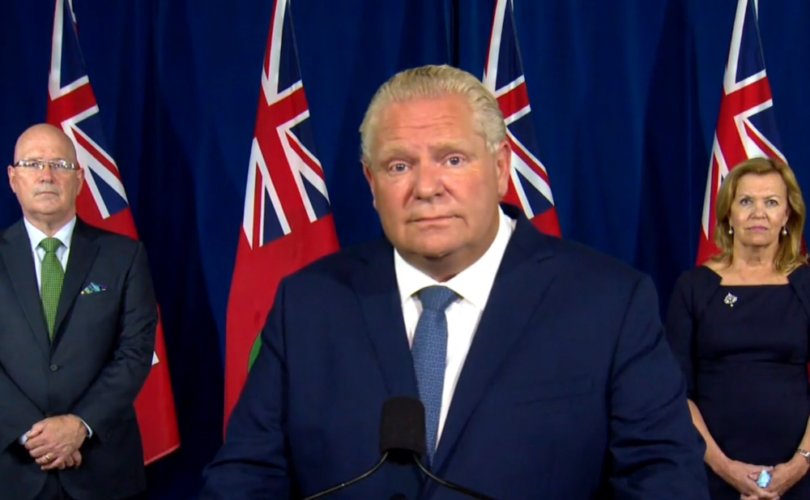 ONTARIO, January 14, 2021 (LifeSiteNews) – In December of 2020 the Premier of Ontario Doug Ford said that cellphone data his government is privy to indicates that many in his province are not following COVID quarantine restrictions, raising questions as to how the cell data was obtained.

“Through cell service we can see people are not quarantining, all of them, at least about 25%, roughly,” commented Premier of Ontario Doug Ford at a Dec. 21 press conference.

“I don’t care if it’s 10%. These folks are roaming the streets and we’re letting it happen. If there is one area that we need to improve is at our borders.”

Ford made the comments regarding the cell phone data during a press conference where he called upon the Canadian Federal government to enact stronger border control measures to test those coming into Canada for COVID-19.

True North News first reported that Ford’s office is being very “tight lipped” about how it obtained the cell phone data which he referred to during the December 21 press conference.

LifeSiteNews reached out to the office of Doug Ford to inquire about the data Ford referenced on December 21, asking where it came from and if it was a province-wide broad spectrum of data.

Ivana Yelich, Director of Media Relations for Ford replied to LifeSiteNews saying that the data was provided to them from third-party vendors and specifically relates to Ontarians who had recently returned from the United States.

“Anonymized cellular data shows that non-essential travellers arriving in Ontario from the U.S. only spend 77 per cent of their time at home during the 2-week recommended quarantine period,” Yelich said to LifeSiteNews.

“The data is provided by third party vendors and is based on mobility patterns of devices located in Ontario that were located in the United States within the previous 14 days.”

As Ford’s office did not provide additional information regarding the cellphone data, it remains unclear how it was obtained or if the Ontario government has more information available than is publicly known.

“General citizen surveillance of this sort would be extraordinary and alarming.”

Currently, all travelers entering Canada are mandated to self-isolate for 14 days.

Last week, Transport Canada announced that all air travelers coming to Canada must present a negative PCR or LAMP COVID-19 test to their airline before being allowed to board their flight.

The Ford government has never publicly acknowledged having cell phone data showing people who should be in mandatory quarantine are breaking the rules.

Despite this, in March of 2020, Ford said that “Everything’s on the table right now,” when he was asked if his government would entertain the idea of using one’s cell phone data to aid in contact tracing.

Just before Christmas, Premier of Ontario Doug Ford announced a province-wide lockdown which began on December 26.

This week Ford announced new measures that have effectively placed Ontario under a state of near-total lockdown.

In addition to declaring a second state of emergency, a stay-at-home order was issued which requires everyone to stay at home unless they are out to purchase food or for other essential purposes, such as outdoor exercise of going to visit a health care facility.

The new rules came into effect Thursday and orders all non-essential stores to be closed by 8:00 p.m.

All outdoor events, along with social gatherings are now limited to just five people and anyone caught breaking the new rules will be faced with fines according to the Ford government.

Masks are now recommended outdoors in areas where distancing is not possible according to the government.

All religious services, as well as weddings and funerals, are limited to a maximum of 10 people indoors and outdoors. Religious drive-in services are permitted with strict conditions in place.