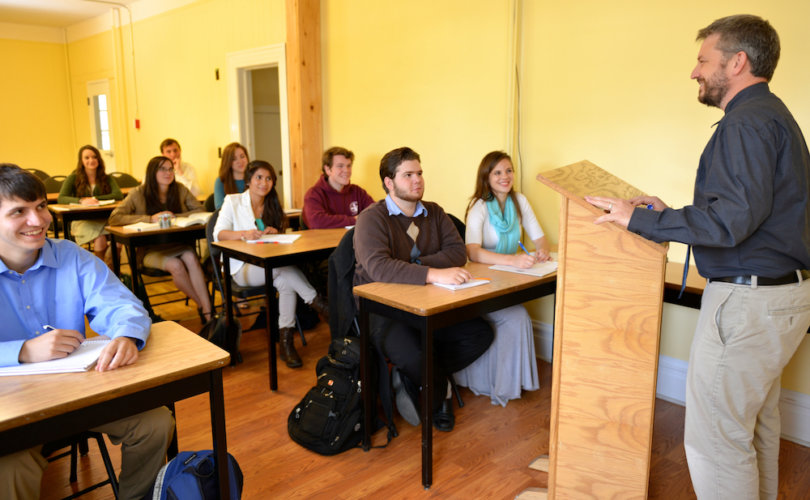 Our Lady Seat of Wisdom, in Barry’s Bay, Ontario, announced January 28 that the minister of advanced education and skills development, Deb Matthews, has agreed to allow it to grant a three-year degree of Bachelor in Catholic Studies for an initial period of six years, subject to certain conditions.

“This is a major event for us,” Dr. Keith Cassidy, OLSW’s president, told LifeSiteNews. “It changes our status significantly.”

“It is an official recognition that the quality of our education is university level, that we are entitled to offer bachelor degrees,” he said. “And it also opens the door for us to enter into formal agreements with other institutions in Canada and elsewhere.”

Cassidy expects OLSW to meet the ministry’s conditions and receive final approval within a few weeks.

The ministry has asked OLSW to provide guarantees of financial security, so that students can be reimbursed if the school goes out of business. Similarly, OLSW has to ensure student records and transcripts will be safeguarded at another institution, he said.

And because the Bachelor of Catholic Studies is a “three-year degree and not an honours degree, they want to make sure that we have a route for our students to go on to do a four-year honours degree” at other institutions, Cassidy told LifeSiteNews in a telephone interview.

It’s also “clear” the ministry wants OLSW to develop its own Bachelor of Arts honours program, he added. OLSW intends to apply to the ministry for authorization “to offer that over the next few years, as rapidly as we can.”

The 17-year-old Catholic post-secondary school is located in the Madawaska Valley in north-eastern Ontario, one hour’s drive east from Algonquin Park, and currently has just over 100 students.

“We do anticipate there will be an increase in our student numbers,” Cassidy said.

In 2005, Our Lady Seat of Wisdom started looking into “what it would take to be a degree-granting institution,” but it didn’t apply until May 1, 2014.

“We came to realize how much was involved. It was an extraordinarily complicated process,” Cassidy explained.

“We needed to get the necessary faculty in place, to meet the requirement for the right number with PhD’s. We also needed to review our courses and program structure to make sure they met our educational objectives and also fulfilled the criteria set out by the Post-Secondary Education Quality Assessment Board (PEQAB).”

Added Cassidy: “It’s not just your academic program that is assessed. You have to have a whole range of administrative policies and structures and appropriate student supports in place.”

The application fee was $5,000, and OLSW also had to pay for two required site visits by PEQAB, which “recommends to the ministry whether institutions should be given degree-granting powers.”

In February 2015, PEQAB did an “organizational review, in which they examine your finances, your administrative structure and your policies,” and eight months later, another team visited OLSW to evaluate its faculty and academic offerings.

“Both the organizational and program reviewers looked very carefully at: Do we meet the conditions of academic quality and academic freedom set out in the criteria for degree-granting institutions? And they found that we did,” observed Cassidy. “They have seen what our program is, and they’ve approved it.”

OLSW is committed to providing an “authentically Catholic education,” he said.

“This is not indoctrination, we are not running some kind of catechism class. This is actual university-level education, and the students are free to accept or reject what is taught, and they’re encouraged to develop critical thinking skills.”

He pointed out that while the degree is called a Bachelor of Catholic Studies, this “doesn’t mean that the credits are religious credits per se; these are credits in philosophy, history, literature, and science, as well as theology.”

Cassidy found it fitting that he opened the email from Minister Deb Matthews on January 28, the feast of St. Thomas Aquinas, because the school has a Thomistic focus.

Up until now it has offered one, two and three year certification, the credits of which are accepted by some colleges and universities in Canada, including Redeemer, Tyndale, and Trinity Western, and by a large number in the United States, including the Franciscan University of Steubenville, Christendom College, Ave Maria University and Thomas More.

OLSW alumni have gone on to a “wide range of professional and graduate careers,” he said, including teaching, law, physiotherapy, religious life, the priesthood and the pro-life movement.

“We’re truly thankful that this has happened,” Cassidy told LifeSiteNews.

“These things don’t happen without prayer.”

For more information on Our Lady Seat of Wisdom, visit their website here.