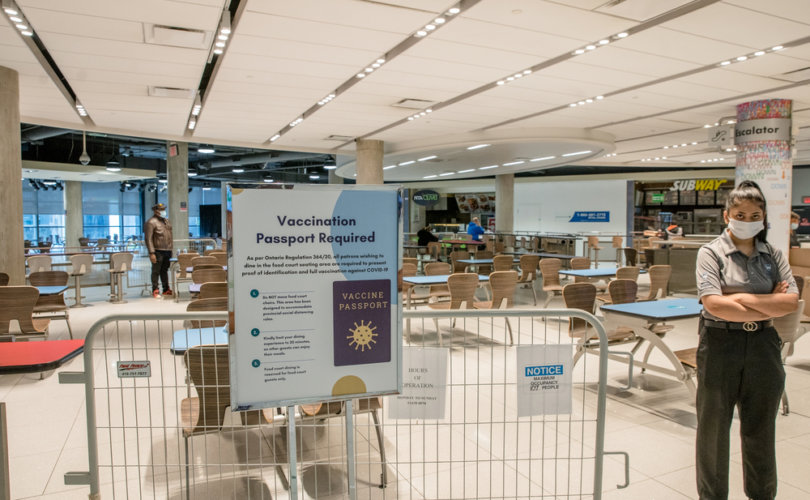 TORONTO (LifeSiteNews) – Ontario might be lifting vaccine passport measures that have segregated the population into groups of vaccinated and unvaccinated citizens.

Chief Medical Officer of Health Dr. Kieran Moore echoed the sentiment and said, “We may not require them in some venues but still require them in mass gatherings. We do not see the whole certification process ending suddenly, but having a phased exit from it over time.”

Moore also signaled that he “can’t see” the segregation measures lifting until after Christmas.

Currently in Ontario, most “non-essential” services require proof of vaccination with one of the available COVID jabs in order to gain full access to services offered.

LifeSite published a comprehensive breakdown of the rules and how they affect Ontarians. As it stands, all Ontarians have basic access to most services and businesses. However, full access is reserved in some cases for those who show proof of vaccination. For example, anyone may eat on a patio at a restaurant, but only those who have taken the abortion-tainted jab can sit inside the restaurant and eat.

Some business and services, such as indoor sports and recreation facilities, are open only for vaccinated adults, and in some places children under 18 can enter without proof of vaccination.

The vaccine segregation policies have caused suffering for many Ontarians, especially as families were encouraged to discriminate against unvaccinated family members during Canadian Thanksgiving. One mother of small children was arrested in front of her weeping children after failing to produce a jab passport in a hockey arena in Bruce County, Ontario.

Bruce County is home to Grey-Bruce Health Services where an Ontario doctor resigned publicly after she said 80% of her ER patients with mysterious issues had both shots.

Ontario is currently in Step 3 of the “Roadmap to Reopen” and has been since July. The province held off on leaving Step 3 due to an increase in cases diagnosed from the PCR test, which has been shown to produce false positive results in high numbers.

Ontario had initially said it would exit Step 3 once 75% of the eligible population was counted as being fully jabbed, but in August it announced that it would break its promise and extend the restrictions without any end in sight.

Premier Doug Ford initially said he would not implement a vaccine passport, citing his concerns that Ontario would become a “split society,” only to have the public believe he lied to them by unveiling a society-splitting vaccine segregation system in September.

Last week, Ontario suddenly lifted capacity restrictions for certain large venues, including stadiums. On Wednesday, the Toronto Maple Leafs’ NHL club hosted their home opener before a packed arena. Only those who had met the vaccine segregation system requirements were allowed into the stadium.

Toronto Sun reporter Joe Warmington posted a video on Twitter where one hockey fan expressed that she “wouldn’t have come” if the segregation measures weren’t in place.

From inside the arena, a video was posted of fans singing the stanza of the Canadian national anthem that says Canada is the “True north strong and free.” All of the fans had to show proof of vaccination and those who are not vaccinated were not afforded the freedom by the government to participate in supporting Canada’s beloved national pastime. Many people were not wearing masks, even though no distancing measures were in place.

Religious services are still required to enforce distancing and masks in Ontario, and cannot legally operate at full capacity.

One anti-lockdown advocate on Twitter expressed his sentiment about the vaccine passport hockey game and stated, “Give me a break. These privileged HYPOCRITES (many maskless) singing ‘True north strong and free’ never stood up against lockdowns or children being forced to wear masks all day long while the unvaxxed couldn’t attend. Deluded.”