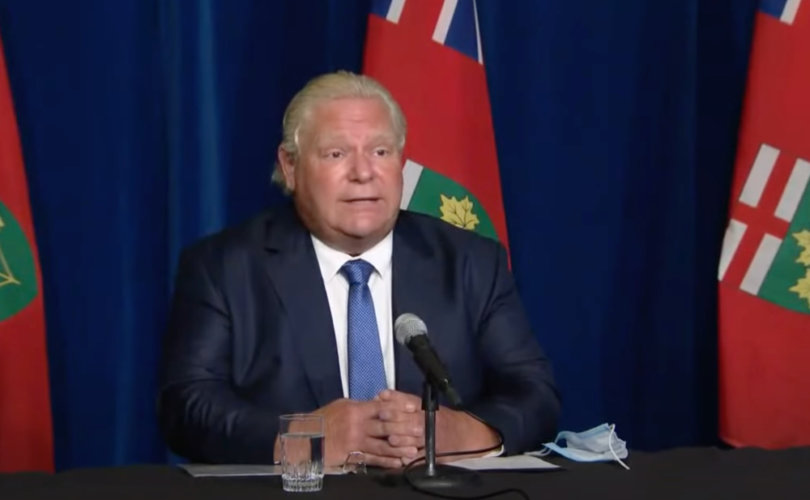 TORONTO (JCCF) – The Justice Centre for Constitutional Freedoms has announced that the challenge to Ontario’s now-cancelled COVID vaccine passport program will be heard in Ontario Superior Court, Toronto Courthouse, on Tuesday, July 26, 2022, and, Wednesday, July 27, 2022,  beginning at 10:00 a.m. EST.

Justice Centre lawyers represent eight Ontario residents who were excluded from normal everyday activities because of the passport system, for making their own medical decisions about the COVID shots.

Ms. Sarah Lamb from Kitchener is one of the court applicants. She received her first COVID shot in May 2021. The following day she experienced a host of adverse effects, including dizziness and loss of sensation below the waist. Ms. Lamb continues to experience some of these effects. Due to the side effects she suffered after her first dose, she decided against a second shot. She requested an exemption from the passport system, and was denied.

READ: Trudeau is slowly leading Canada down the path toward Chinese-style totalitarianism

Another applicant, Ms. Jackie Ramnauth, a single mother with a 13-year-old son, has been living with a blood clot disorder since 2007. She has been hospitalized several times for blood clot-related conditions.

The AstraZeneca shot was initially promoted by the Ontario government as being safe and effective, however, after it was found to be associated with blood clots, its’ use was suspended for the general population.

Ms. Ramnauth was concerned about the COVID shots due to her underlying condition and the recent development of the COVID shots. For making a health decision that she determined was in her best interests, Ms. Ramnauth was banned by the Ontario government from enjoying everyday activities with her son like going to the zoo, playing sports, eating at restaurants, going to the movies, and being involved in sports.

Ontario’s vaccine passport system allowed for an extremely limited number of exemptions for medical reasons, strictly decided by the government, which Ms. Lamb and Ms. Ramnauth did not qualify for, despite their health conditions.

Some applicants in the court challenge additionally have religious objections to taking the COVID shots, but the passport system in Ontario failed to provide a category for exemption based on sincerely-held religious or conscientious beliefs.

All the applicants were excluded from normal social events and every-day activities that were previously accessible to all Ontarians. The Justice Centre lawyers are arguing that excluding people from everyday societal activities, without proof of having two doses of the COVID shot, is a violation of their rights guaranteed under the Canadian Charter of Rights and Freedoms.

The Justice Centre lawyers will argue that the passport system is coercive, arbitrary, and discriminatory, and that it removed the Ontarians’ free and informed consent to a medical procedure or intervention.

READ: Globalists are intent on mandating digital IDs. Here’s how you can fight back

The Ontario government’s position is that there is no inherent right to enter private venues such as restaurants and gyms and that the vaccine passports are a valid incentive system to get people to receive the COVID shots. However, the Ontario government forced businesses to discriminate against individuals based on their medical status, notes Justice Centre lawyer Jorge Pineda.

The vaccine passports ended in March 2022 in Ontario, following increased infection rates of the Omicron variant and growing evidence that the COVID shots did not prevent transmission or infection with COVID. Both vaccinated and unvaccinated people can spread COVID. The COVID shots are still in clinical trials after being on the market less than two years.