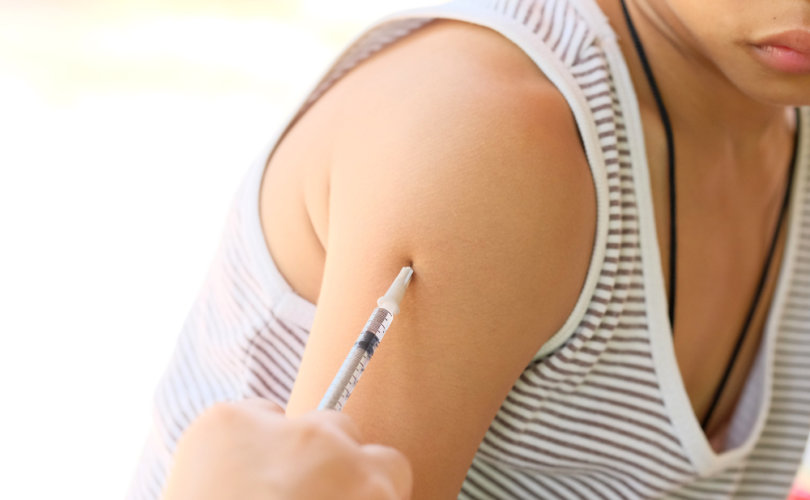 TORONTO, May 24, 2016 (LifeSiteNews) – The Ontario government will inject 150,000-plus school boys from Grade Seven up with a vaccine against sexually-transmitted Human Papilloma Virus beginning this fall, despite concerns it attacks the auto-immune systems of some, and links to deaths in some countries.

The vaccine Gardasil has been given to all girls from Grade 8 up in Ontario since 2006. The new program could cost an additional estimated $60 million a year.

Advocates argue that the cost is justified because treating a single cervical cancer patient could cost several million dollars.

Strong opposition came from the advocacy group Parents as First Educators, which warns that using the school system to vaccinate against HPV “undermine[s] parental authority.”

Religious leaders such as Calgary Bishop Fred Henry have protested that giving a vaccine against an STD to school children assumed premarital sexual activity—and perhaps condoned it.

One of the leading arguments against Gardasil comes from parents who claim their daughters suffered severe reactions to it, disabilities and even death. A recent Toronto Star story reported that more than 50 Canadian girls developed serious medical conditions after their Gardasil injections and 15 of them were hospitalized. It also reported more than 100 deaths in the U.S. and tens of thousands of reports of adverse effects.

The COG for Life organization publishes a pamphlet detailing Gardasil’s possible side effects. Its “partial list” includes miscarriage, stillbirth, ovarian cysts, genital warts, multiple sclerosis, lupus, paralysis, and stroke. The pamphlet claims more than 28,000 reports of such adverse side effects were made to the U.S. government’s Vaccine Adverse Event Reporting System by 2012, as had 128 deaths—all within the population of girls aged 9 – 24.

According to PAFE, Japan’s equivalent, the Vaccine Adverse Reactions Review Committee, reported “almost 2,000 adverse events… including 358 cases that were evaluated as serious” from Gardasil’s first three years of use there.