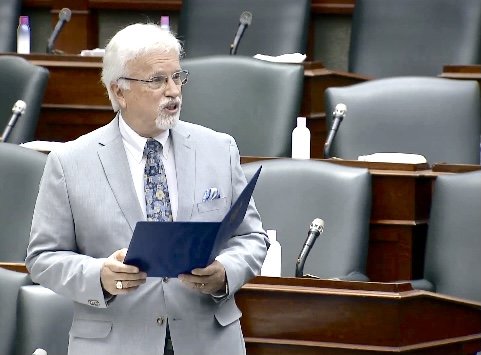 TORONTO, Ontario (LifeSiteNews) — In a shockingly undemocratic move, the Ontario Health Minister and Conservative government shut down the question period in the legislature after a Member of Provincial Parliament asked about the reported rise in stillbirths linked to the COVID jabs.

Ontario Minister of Health Christine Elliot, along with Doug Ford’s Progressive Conservative government, abruptly ended the Question Period in the provincial legislature this week after Independent Member of Provincial Parliament Rick Nicholls asked Elliot about the reported rise in stillbirths among vaccinated mothers in the province.

After being asked about the alarming rise in stillbirths amongst vaccinated mothers in Ontario by MPP Rick Nicholls, the Ontario Minister of Health and the PC government take the UNPRECEDENTED step of ignoring, disregarding and refusing to answer his question! pic.twitter.com/ZEsCnqrlia

“Earlier this year doctors said it was okay for pregnant mothers to get the vaccine, now we are seeing a substantial rise in stillbirths,” began Nicholls, whose opening remarks were immediately met with dissent and members of the legislature saying “No,” to shut down his inquiry.

“Look, I’m only reporting what I’ve discovered,” he replied.

Continuing, Nicholls told the legislature that those in the midwifery community and in healthcare more broadly have reported to him that “people opting for the jab have seen stillbirth rates rise exponentially.”

“Speaker, we have heard from hospital joint Chief of Staff saying that the rise in stillbirths is erroneous,” stated Nicholls.

“Well, I have been informed by frontline healthcare workers who have witnessed this tragedy firsthand, [and] they’ve chosen to report these stillbirths to protect the public,” he continued.

“We also know that CPSO (College of Physicians and Surgeons in Ontario) is muzzling staff. If these incidents are not being reported properly, then in my opinion it’s medical fraud.”

“So, my question to the minister, who do you believe, hospital administration or frontline nurses and doctors, who are willing to risk it all?”

After his statement, the Speaker can be heard saying “Thank you very much. That concludes our question period for this morning.”

Off mic, Nicholls can be heard asking, “No reply?” but the entire assembly ignores him and moves on with the agenda.

Nicholls told LifeSiteNews that while he cannot reveal who the whistleblowers in the healthcare field are, he considers their information to be credible. He also explained to LifeSiteNews that he was told it was not the Speaker’s decision to cut off the line of questioning, but it was the government itself who declined to provide a comment.

Nicholls is not the only person to raise concerns about reported stillbirths in Ontario. Last month, Dr. Daniel Nagase, a doctor in British Columbia who came under fire from review boards for treating COVID patients with the potentially life-saving drug but intentionally suppressed drug, ivermectin, said in an interview that there were 86 stillbirths in “fully vaccinated” women in Waterloo, Ontario, in a six-month period. He also reported a similarly dramatic increase in British Columbia.

According to Nagase, 86 stillbirths during six months is a staggering increase when compared with the expected “five or six” stillbirths that normally occur within an entire year in a population the size of Waterloo’s.

While health officials and Canadian state media have teamed up to deny claims that the vaccines may be unsafe for pregnant women, Massachusetts Institute of Technology (MIT) graduate Steve Kirsch, a technological entrepreneur and founder of the COVID-19 Treatment Fund (CETF), which funds research into off-label treatments against COVID-19, expressed skepticism for the so-called “fact check” done by the Canadian Broadcasting Corporation (CBC).

The study referenced by the CBC is from the New England Journal of Medicine (NEJM). However, as Kirsch pointed out, the study pertains to miscarriages, not stillbirths, and at the time of the study, most of the women were still pregnant and had just recently been vaccinated. Further, the study admits that while they did not immediately find an increased risk for miscarriage in the vaccinated, the “safety data on Covid-19 vaccination during pregnancy remain[s] limited.”

“The studies cited in the fact check do not prove their point at all about stillbirths to vaccinated mothers! They assume that nobody is going to click on those studies and compare them to the assertion (still births, vaccinated moms). This is very misleading, but the reporter didn’t seem to mind,” wrote Kirsch. “Perhaps these fact checkers are better off showing the exact quote and then showing the proof they are wrong. This fact check does none of that. Are you surprised?”

“And that NEJM study on the matter? Well it, at the time that was written, it was too early to know the outcome of the pregnancies since many of the women were just vaccinated. The study should have finished by now, but we only hear crickets as to what the final results of the study were. I wonder why that is? Does anyone know?”