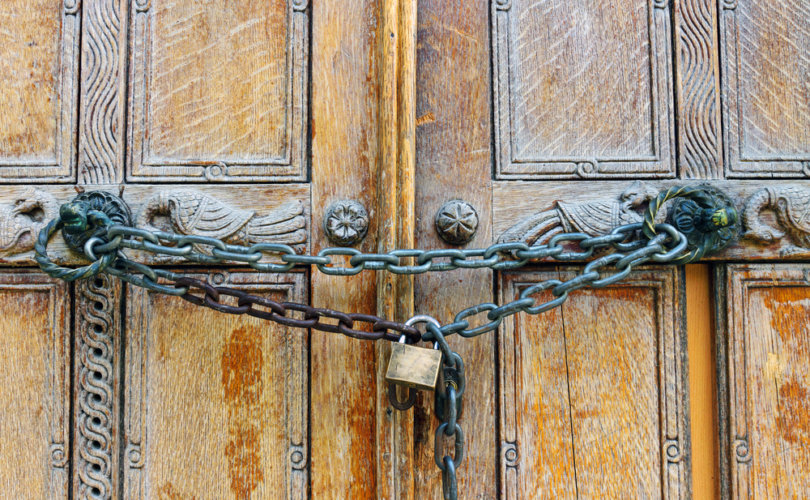 AYLMER, Ontario, May 14, 2021 (LifeSiteNews) – An Ontario judge ordered today that the doors of a Christian church be locked for defying provincial lockdown rules and that the church, pastor, and assistant pastor be fined a total of $48,000 in penalties as well as pay $69,000 in legal fees.

Ontario Superior Court Justice Bruce Thomas said that his ruling on Church of God in Aylmer, Ontario, where Henry Hildebrandt is pastor, will set an example across the province about what happens to those who break the province’s laws.

“This location has been the crucible of the contemptuous activity,” said Thomas. “This place is part of the fabric of their lives, but these regulations were put in place to protect the community and to save lives.”

Before the rise of restrictive measures such as stay-at-home orders and lockdowns mandated in the name of combating the spread of the coronavirus, Canadians had enjoyed the right, as guaranteed by the Charter of Rights and Freedoms, to assemble and worship. Now many rights have been effectively stripped away, including the rights to gather and to travel, in the name of keeping people “safe.”

On April 27, the Ministry of the Attorney General requested from the court an “urgent hearing” regarding the church and its pastor engaging in alleged “civil contempt.”

“The Attorney General would then seek, at a subsequent sanctions hearing, fines and an order directing the sheriff to lock the doors of the Respondent church until no gathering size limits apply to the church under the Reopening Ontario Act,” the request stated.

The request for the hearing was a reaction to a much-publicized April 25 service at the Church of God, where Independent MP Derek Sloan and Independent Ontario MPP Randy Hillier attended with more than 400 others in defiance of provincial health rules that limit church attendance to a maximum of 10. Sloan and Hillier were later fined by police for attending the service and have said they will fight the fines.

Aylmer chief of police Zvonko Horvat said he is already in contact with church leaders and will follow the judge’s order.

“We've had some positive interactions with the church this (Friday) morning and we will be looking to execute the judge's order in the least intrusive way possible,” he told CBC News.

The church will be locked until the province’s government allows all churches to hold services at 30 percent capacity. The judge has given 90 days to pay the fines.

Pastor Hildebrandt told supporters today in a video filmed on location in his church that what happened to him and his church should be a “wake-up call” to all Canadians about what is happening to their country.

“Fences are built around meeting houses, doors are locked, pastors are put in prison,” he said.

“Our government right now is allowing unelected health officials to push our judges to make criminals out of law-abiding citizens. It's tremendous. This is where we are. We will see where things go. I trust that this will be a wake-up call for us like never before. This is not the end, this is the beginning of where things are going.”

Hildebrandt indicated that the ruling will not stop him or his congregation from worshipping.

The pastor reminded his congregation today that God is in control.

“God is my leader, God is on His throne, and God is right,” he said.

“It has never gone well when people fought against Almighty God. Never. When God opened the Red Sea, he opened it for the people of Israel, not for Pharaoh. But if Pharaoh chooses to follow, it's his choice. Now, God will be glorified either way. When you make the wrong choice, you make the wrong decision, God will be glorified by you, either way. I just choose to be on God's side and I am so glad this morning to be on the right side of history,” he continued.

“An encouraging word to all of those in this area, all of those standing nationwide: Stand strong, be encouraged. God is with us. We're standing on solid, solid rock. And I knew before the verdict was pronounced this morning, I knew it, it was a win-win situation for God and his people and a lose-lose situation for the enemy. That's where it stands. May God help us. We will continue doing what God wants us to do. You can count on it by the grace of God,” he added.