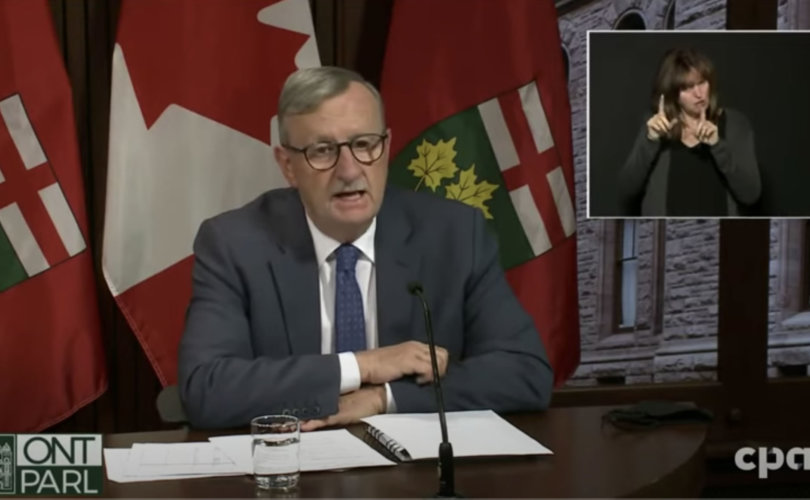 TORONTO, December 7, 2020 (LifeSiteNews) – The Chief Medical Officer of Ontario has stated that proof of COVID-19 vaccination could be mandatory in order to have freedom to move around as well as access to various buildings and facilities.

Dr. David Williams made the comments while addressing a question at a December 3 press conference on whether vaccines for COVID-19 would be made mandatory. “We can’t force someone to take a vaccine,” Williams replied.

Yet despite ruling out a mandatory vaccine, Williams proceeded to explain that severe restrictions would be placed on those who did have receive a vaccine.

“What we can do is to say sometimes for access or ease in getting into certain settings, if you don’t have vaccination then you’re not allowed into that setting without other protection and protective materials,” he said.

Williams continued, “So what may be mandatory is proof of immunization or vaccination with the proper product in order to have latitude and freedom to move around, and certain access into long-term care facilities, a hospital or different things, without wearing other types of personal protective equipment, etc.”

He also mentioned the proposed system in relation to schools: “Same as the school attendance, it may be much like our other vaccines — we haven’t gone there yet — but we would make it mandatory for access in and sometimes being excluded if there’s a risk or hazard going on.”

Currently, under the Immunization of School Pupils Act 1990, parents are required to ensure that children receive the necessary vaccinations, then “prove they’ve been vaccinated or face potential suspension from school.” One permitted exception to the mandatory vaccination of pupils is religious belief. If a parent completes an “immunization education session with a medical officer of health” and then files a statement of conscience or religious belief, then the child is not subject to the vaccination program.

Williams closed his comments by repeating that vaccinations will be closely related to freedom of movement whilet not being absolutely mandatory. “So it’s more a facility of movement and around that, not that someone is going to be forced to take it against their will,” he said.

Canada has procured up to 194 million vaccinations against the virus, and reportedly can obtain another 220 million. Its projected supply means that it will have more doses of the vaccine “per capita than any other nation.”

It is unclear precisely what Williams was referring to while mentioning a “risk or hazard” in his comments. A Statista report shows Ontario to have had 3,772 deaths deemed to be connected to COVID-19 as of December 6. Meanwhile, a 2009 report documents that Ontario had 88,468 deaths in that year. Of that number, more people died from unintentional injuries in 2009 than have so far died apparently from COVID-19.

Research has shown that support for a mandatory vaccine is down compared with a few months earlier in the year. Only 59 percent of Canadians would support the move, as opposed to 72 percent when polled in May. The vast majority, 71 percent, said taking a vaccine that was approved so fast makes them nervous, with 69 percent saying they have concerns for potential harmful long-term effects of the vaccine.

Recently, Dr. Michael Yeadon, the former vice president of vaccine company Pfizer, who retired from the company “with the most senior research position in this field,” rejected the idea of a need for vaccines in relation to COVID-19.

Yeadon stated, “There is absolutely no need for vaccines to extinguish the pandemic. I’ve never heard such nonsense talked about vaccines. You do not vaccinate people who aren’t at risk from a disease. You also don’t set about planning to vaccinate millions of fit and healthy people with a vaccine that hasn’t been extensively tested on human subjects.”

Professor Dr. Paul Cullen, the president of Germany’s “Doctors for Life,” also weighed in on the subject of vaccinations for COVID, saying it “could prove to be the biggest mistake of the whole COVID episode.” Cullen also questioned “whether SARS-CoV-2 is even a candidate for mass vaccination or a mass vaccination requirement,” adding that for the majority of people, the virus is “mild and often asymptomatic, especially in children.”

— Article continues below Petition —
SIGN: Join petition calling for a stop to COVID vaccine testing in Europe
Show Petition Text
16573 have signed the petition.
Let's get to 17500!
Thank you for signing this petition!
Add your signature:
Show Petition Text

Readers are encouraged to contact their Members of Provincial Parliament in Ontario by clicking HERE. They may also contact the Premier of Ontario, Doug Ford: