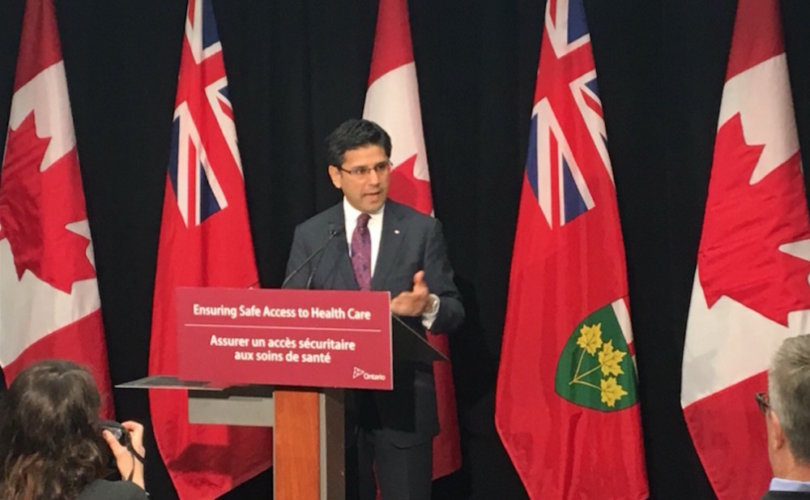 OTTAWA, May 29, 2017 (LifeSiteNews) — Ontario’s Attorney General announced plans for “bubble zone” legislation this morning that would ban pro-life demonstrators and sidewalk counselors from being in front of any of the province’s abortion clinics.

Yasir Naqvi, Ontario Attorney General and Ottawa Centre MPP, made the announcement alongside Ottawa Mayor Jim Watson and Ottawa City Councillor Catherine McKenney. He said the legislation will be tabled in the fall.

He also added that “no healthcare professional should have to take such things into account when going into work in the morning.”

“This fall I plan to introduce a bill that would propose the creation of safe access zones around specified healthcare facilities that offer women's reproductive services to protect the safety and security of the patients, staff, and visitors,” he added.

He said the “zones around abortion clinics would ensure that women across Ontario have safe access to healthcare services and that their privacy and dignity are protected when doing so. “

Naqvi said that over the summer his “ministry will consult with legal and healthcare experts, advocacy groups, and local clinics to determine the details of this proposed legislation.” He said that he would look into existing legislation in British Columbia, Quebec, Newfoundland, and Labrador as a model for Ontario.

“Once again we see the heavy-handed people on the left attempting to remove the right of free speech from those they disagree with,” he told LifeSiteNews.

Hughes said that “heaven only knows” how many women have been helped and how many children have been spared from abortion by the peaceful and prayerful counselors outside of abortion clinics.

“The womb is a bubble zone for the baby. It's only those who attempt to breakthrough that bubble zone and kill the child inside, they're the ones that all society needs protection against,” he said.

Mayor Watson announced last week that he had sent a letter to Naqvi requesting an “Access to Abortion Services Act” to prohibit pro-life efforts not only at Ottawa’s Morgentaler Clinic at 65 Bank St., but across the province.

The call for a bubble zone law came shortly after the Toronto Star's Heather Mallick wrote an opinion piece last month in which she accused pro-lifers protesting outside the downtown abortion clinic of being “creepy” and “threatening.”

Mallick also accused the police of not protecting the abortion clinic and its clientele.

But Cyril Winter, one of the pro-life demonstrators who often carries signs of abortion-victim photography in front of the Ottawa abortion facility, told LifeSiteNews last month that Mallick’s accusations were “vicious, lying and libelous.”

Frank Barrett, an 89-year-old ex-RCMP officer who also protests in front of the Ottawa abortion clinic, told LifeSiteNews at that same time that the claims of pro-life aggression were “ridiculous untruths.”

The City of Ottawa flew a pro-life flag on May 11 for a few hours during the National March for Life. Later that day, the mayor ordered the flag taken down and demanded a review of the flag raising policy. The mayor then tweeted that his “personal opinion has always been that women have the right to choose.”

Abortion bias: Columnist fails to get the facts about pro-life demonstrators