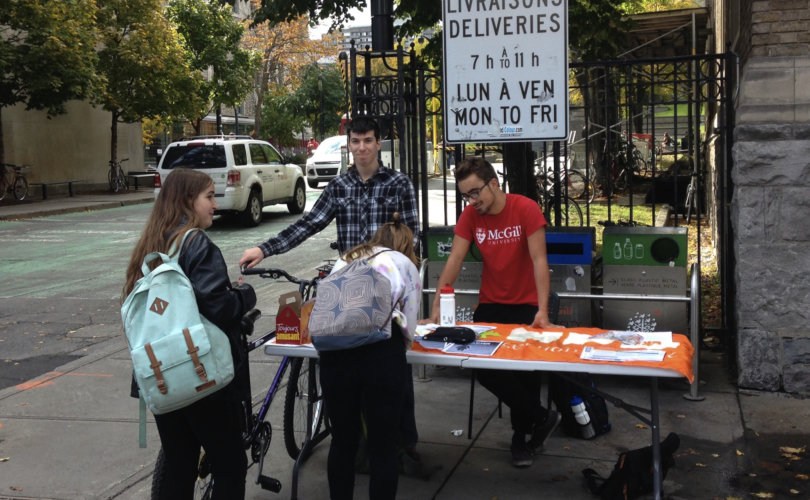 Students sign a petition supporting free contraception with a prescription for all Canadians.

OTTAWA, Ontario, November 7, 2016 (LifeSiteNews) – An NDP member of Parliament brought forward a motion earlier this fall calling on the government to provide “all prescribed contraceptives” for free.

MP Irene Mathyssen of London, Ontario, made her motion on September 28, which was World Contraception Day, but it went unnoticed until late last month when the member was in Geneva.

Though one of the motion’s stated premises is that “particular groups such as youth, immigrants, and those of low socioeconomic status face marginalization in healthcare which can create a greater barrier to accessing contraceptives,” Mathyssen wants contraceptives to be provided free in all provincial health plans for all income groups, with Ottawa providing its share via increased transfer payments.

According to University of British Columbia health economist Steve Morgan, all Canadian provinces already cover contraceptives for those on social assistance. Otherwise, other than drugs administered by doctors or hospitals, and those provided to seniors, no drugs are covered. That means Mathyssen would have to make a case for contraception being more important than all other pharmaceuticals and the medical conditions they address.

Jack Fonseca of Campaign Life Coalition sees problems at many levels. For starters, he told LifeSiteNews, for “the Liberal government … to meddle in the provincial jurisdiction of healthcare … would be unconstitutional. Let the provinces decide what they deem to be ‘medically necessary.’”

Provinces decide what to add to basic medical coverage, but Ottawa provides a huge slice of the funding on the condition the provinces cover hospital care and physicians’ services, Morgan says. “When medicare was being planned in the 1940s and 50s, it was hoped that prescription drugs and dental care would ultimately be included.”

Fonseca also disputes whether contraception is medically necessary. “We hope, of course, provincial legislators will not be so foolhardy as to spend a single taxpayer dollar on birth control,” he told LifeSiteNews. “Every province is suffering a shortage of doctors, nurses, hospital beds, life-saving MRI machines, treatment for autistic children and sufficient money for costly cancer medicines. If the federal government is to increase transfer payments for healthcare, every dime should go towards these areas that are severely underfunded and which, in some cases, result in deaths that could have been preventable.”

Fonseca also pointed to the harmful side effects of contraception, such as an increased risk of breast cancer and greatly elevated risk of depression and suicide. “When you play around with natural law, with the way the body is supposed to operate, you expect to see chaotic results like this,” he said.

Mathyssen’s motion was finally reported on by the VICE news website in a conciliatory article that called her a “Hero MP” in the headline. Nonetheless, the story contained a link to “the sexist history of birth control,” which took the reader to an article on the adverse side effects of birth control.

Joyce Arthur, Canada’s leading abortion rights activist and executive director of the abortion rights coalition of Canada, agrees with Mathyssen that contraception  is “absolutely essential for women so that they can control their fertility.” Healthcare is not just about treating illness, she insists. “It is more holistic, and promotes well being across a wide range of mental, physical, and social determinants.”

Arthur argues that contraception should be provided free out of fairness to women, who currently pay for most of the contraception in use in Canada. “It’s discriminatory to make them pay” for drugs or devices that benefit men and women.

But Fonseca said, “She’s playing with words.” The health system funds plastic surgery for the treatment of burns and disfigurement but doesn’t cover the same doctor when he does facelifts, he noted. The distinction is clear. “Not having a baby is a personal preference, not a medical necessity,” he said.

Fonseca added that “the NDP wants the taxpayers to pay for contraception to enrich the abortion industry. It will be abortion clinics that provide the extra contraceptives and expand their operations and their revenues.” But one sure thing, he said, is that “when more people use contraceptives, there end up being more abortions.”