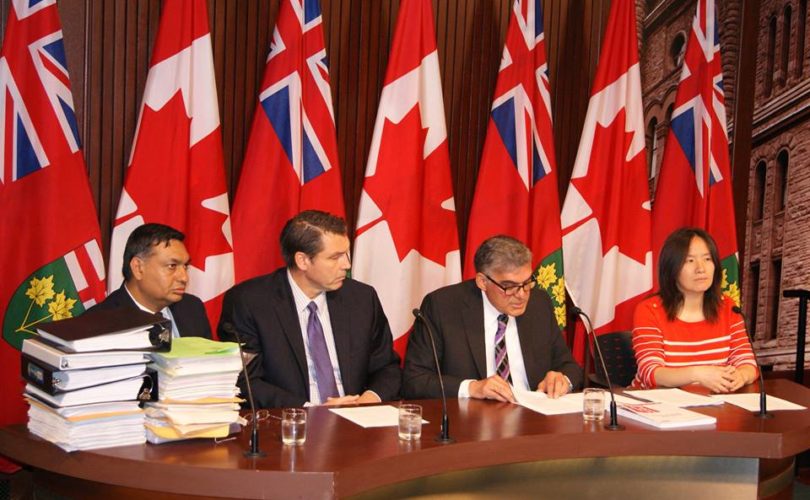 TORONTO, June 4, 2015 (LifeSiteNews) — A petition signed by 185,000 people asking the Liberal government to repeal its controversial sex-ed curriculum made an impressive heft of paper when carted into Queen’s Park this Monday.

The massive petition filled several binders and one banker’s box, piled on Monte McNaughton’s desk and perched on a chair beside it, when the MPP from Lambton-Kent-Middlesex presented the petition to the Ontario assembly, after which a pintsized page carried the weighty bundles away.

The 16 representatives of the Canadian Families Alliance (CFA) had earlier brought the petitions to their kick-off Queen’s Park press conference as irrefutable evidence of widespread parental opposition to Premier Kathleen Wynne’s sex-ed curriculum.

The newly formed grassroots umbrella group representing 200,000 parents from a diversity of cultures, races, faiths and backgrounds is gearing up for its first major event.

According to spokesmen Lou Iacobelli and John Himanen, the CFA’s request is that of the 185,000 petitioners: that the Liberal government withdraw the radical sex-ed curriculum and start again, this time with meaningful parental consultation.

The “inflexible” Wynne government has pushed parents into a corner, said Iacobelli, a retired teacher. “Never would I have imagined that as a grandfather, I’d be part of CFA fighting for parental rights.”

The CFA spokesmen both emphasized that opting out is not a viable option, despite Premier Wynne’s insistence it is. Himanen stated that withdrawing a student from the curriculum could be considered discriminatory or harassing under the Ontario Human Rights Code. Iacobelli pointed out the long-running case of Steve Tourloukis, the Hamilton father mired in a three-year lawsuit with the school board over his right to withdraw his children from classes he objects to, and to be informed about what his children will be taught.

Another CFA member, Feras Marish, noted that parents will pull their kids from school in September indefinitely if necessary, pointing to the successful school “strike” in May, in which an estimated 70,000 children were kept home from school across Ontario to protest the sex-ed curriculum.

CFA’s Jotvinder Sidhu noted that the Liberal government is “bullying” parents by forcing through a sex-ed curriculum that is “not acceptable to us.” He said schools are usually so attentive to parental rights they send home a form asking if a child can “have a piece of pizza.” But in this far more sensitive area, parental rights are trampled on.

“CFA calls on the government to do the right thing: listen to parents and drop the controversial curriculum,” said Iacobelli. “CFA will continue to reject any intrusion into the private lives of their families.” Or as CFA’s Maggie Amin put it: “We don’t want the government to co-parent with us.”

McNaughton, a staunch advocate for parental rights presented the 185,000-name petition that afternoon – on International Children’s Day, as he noted. Most of the MPPs, however, began exiting the chamber as he rose to speak, because voting was finished. Wynne remained but chatted with two other members, seemingly oblivious to the proceedings.

The petitioners asked the government not only for a repeal of the sex-ed curriculum, but for a “meaningful parental consultation process that actually gets buy-in from parents across the province of Ontario,” McNaughton said. “I’m proud to support this petition and will be signing it.”

That makes 185,001 names. And as the CFA continues its determined and united opposition, no doubt there will be more.