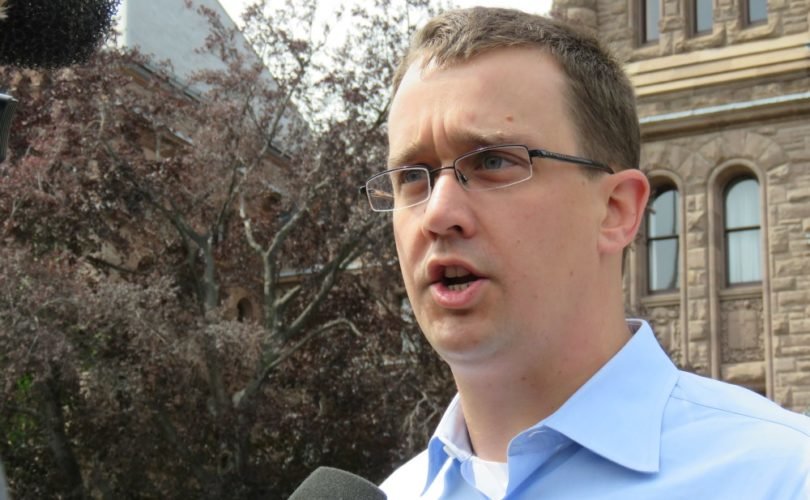 The province’s doctors are facing a “globally unprecedented” attack on conscience rights from the College of Physicians and Surgeons of Ontario, the 39-year-old MPP for Lambton-Kent-Middlesex told LifeSiteNews.

“I’ve talked to many healthcare administrators and healthcare providers,” McNaughton said. “There’s just huge concerns because people don’t think that anyone should have to go against their conscience when it comes to assisted suicide.”

The CPSO’s current policy forces objecting doctors to refer patients to willing and accessible colleagues for such “services” as abortion, abortifacient contraception, and euthanasia.

It also compels doctors to provide such “services” in unspecified emergency situations.

McNaughton blasted the CPSO on December 5 in Queen’s Park, but so far, he has been the only one of 107 MPPs to raise the issue.

But the two-term MPP, who was recently acclaimed Conservative candidate for the 2018 election, believes his colleagues back him on this.

“I can certainly say within the caucus there’s concerns about conscience rights,” McNaughton said.

The Liberals are intervening in a court challenge launched by five Christian doctors, who argue the CPSO’s policy violates their Charter rights to freedom of religion and freedom from discrimination.

The doctors are co-plaintiffs with the Christian Medical and Dental Society of Canada, the Canadian Physicians for Life, and the Canadian Federation of Catholic Physicians’ Societies.

“I think it’s very clear the provincial Liberal government is not prepared to defend conscience rights for doctors and healthcare providers,” McNaughton told LifeSiteNews. “They’re siding with the College.”

He sees the Liberals’ “Medical Aid in Dying” Bill 84, tabled December 7, as an opportunity to explicitly legislate conscience rights.

There will be “full debate on the MAID legislation when the House goes back in February,” and Bill 84 will be “open for amendments at committee stage,” McNaughton observed.

“I would encourage him to do that,” Alex Schadenberg, executive director of the Euthanasia Prevention Coalition, told LifeSiteNews.

“The fact is there’s a lot wrong with Bill 84, but if they can add conscience rights, that would at least bring something good about it,” he added.

The federal Liberal Bill C-14 legalizing euthanasia “essentially leaves it up to the provinces to make certain decisions, because, of course, it’s provincial jurisdiction that determines health.”

Ontario’s Bill 84 “really provides us with no real oversight, and that’s very concerning,” Schadenberg noted. The EPC is advising people to contact their MPPs to protest the bill’s flaws.

McNaughton is also concerned about the potential threat to conscience rights of religious institutions in Bill 41, the Patients First Act, which the Liberals passed December 8.

The bill states: “A directive shall not unjustifiably as determined under section 1 of the Canadian Charter of Rights and Freedoms require a health service provider that is a religious organization to provide a service that is contrary to the religion related to the organization.”

But McNaughton, who chaired the legislative committee on Bill 41, fears the term “unjustifiably” will allow the Liberals to claim that in some circumstances compelling a publicly funded religious institution to provide “services” it morally objects to is justified.

He voted against the bill for a number of reasons, including his contention it funnels “more money to administration than to patient care.”

“With this particular clause in Bill 41, I want the government to be very clear and transparent on what their intentions are for faith-based and religious institutions.”

Conscience rights are “going to be an issue that I’m going to fight tooth and nail over the next several months and beyond if that’s what it takes.”