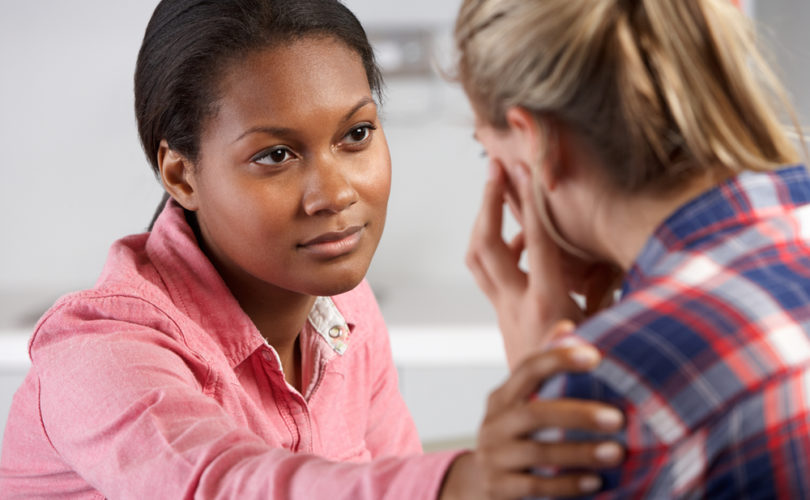 TORONTO, March 13, 2015 (LifeSiteNews.com) — Ontario’s New Democrats are backing a private member’s bill that would prevent teenagers from getting psychotherapy for unwanted homosexual feelings and prevent therapists willing to provide it from receiving payment through the government’s health insurance plan.

“Being lesbian, gay, bisexual, trans, two-spirited or queer is who one is,” says the bill’s sponsor, MPP Cheri DiNovo. “To tell a child that who they are is wrong, we consider abusive.”

Meanwhile Health Minister Eric Hoskins thanked DiNovo for her concern but insisted the bill was unnecessary since such therapy was banned as discriminatory under the Ontario Human Rights Code and might also be considered unprofessional conduct by the Ontario College of Physicians and Surgeons.

DiNovo appeared at a press conference Wednesday with a “transwoman” (biological male) to announce the “Affirming Sexual Orientation and Gender Identity Act,” and appeal for the support of the majority Liberal caucus to get it passed.

She defended the bill as an effort to prevent parents from putting “trans” or homosexual children into “aversion” therapy to force them to be heterosexual or same-gendered.

The idea that a child might not welcome his or her same-sex attraction or desire to cross-dress or belong to the opposite sex seemed not to have occurred to the NDP, or the news media. However, defenders of what is more rightly called “change” therapy, or “sexual orientation change efforts,” such as the Alliance for Therapeutic Choice and Scientific Integrity, insist that “clients have the right to claim a gay identity, or to diminish their homosexuality and to develop their heterosexual potential. The right to seek therapy to change one's sexual adaptation should be considered self-evident and inalienable.”

Nonetheless, the homosexual/transgendered lobby has succeeded in banning such therapy for minors in California, New Jersey, and Washington, D.C., while efforts have been made or are underway to do the same in eight other U.S. states.

The arguments are the same: the therapy doesn’t work; sexual orientation is immutable; and efforts to change a person’s orientation are always imposed on people, often by parents. As well, any effort to change or minimize same-sex attraction is confused with “aversion” therapy, a treatment used in the 1950s and 1960s to address several sexual behaviors as well as alcoholism and other addictions, with minor electric shocks and elastic bands (for the patient to flick against his own wrist) sometimes used.

One of America’s most prominent practitioners of change therapy, Dr. Joseph Nicolosi, told TheChristians.com in December 2013, “Gays don’t like the idea that their lifestyle is based on childhood trauma and that this trauma is treatable.” Nicolosi said he and his team have treated thousands of patients successfully for same-sex attraction, many of them teenagers.

The treatment Nicolosi uses combines cognitive or “talk” therapy with EMDR (Eye Movement Desensitization and Reprocessing), which was developed to treat Post Traumatic Stress Syndrome in veterans of the Vietnam War. Nicolosi’s theoretical foundation is that homosexuality is caused by a weakened sexual identity flowing from an inadequate identification with the same-sex parent. His website provides many first-hand accounts of successful treatment.

The National Association for Research and Therapy of Homosexuality, which was co-founded by Nicolosi and now operates under the Alliance for Therapeutic Choice, argues that the homosexual lobby has succeeded in persuading many prominent counseling bodies to condemn or discredit change therapy, mostly on the grounds that homosexuality is innate and any move to change it is “homophobic” in motivation.

But NARTH unashamedly condemns the attempt to censor its scientific view as ideological rather than scientific. “There is no such thing as a ‘gay gene,’” insists NARTH’s website, “and there is no evidence to support the idea that homosexuality is simply genetic.”

“However, biological influences may indeed influence some people toward homosexuality. … But none of these factors mean that homosexuality is a part of human design, or that it is inevitable in such people, or that it is unchangeable. Numerous examples exist of people who have successfully modified their sexual behavior, identity, and arousal or fantasies.”

Nonetheless the ideology resurfaced at Queen’s Park this week. Flanking DiNovo was McMaster University researcher Jake Pyne, who claimed that there were still practitioners doing “aversion” therapy in Ontario. Some of it was religiously motivated, he said.

Indeed, objective scholarly studies have shown that people who want to minimize their homosexual attractions can do so with strong motivation, and that religious beliefs which condemn homosexuality provide such motivation.

Another supporting actor in the NDP set-piece was Dr. Joey Bonifacio, a pediatrician and adolescent medicine specialist at the Hospital for Sick Children, who claimed, according to the Toronto Sun, that change therapy is “unethical, and can trigger depression and suicide in young people.” But he said nothing (nor did any journalist evidently challenge him to do so) about the high suicide rates among youth who embrace a homosexual or transgendered identity.