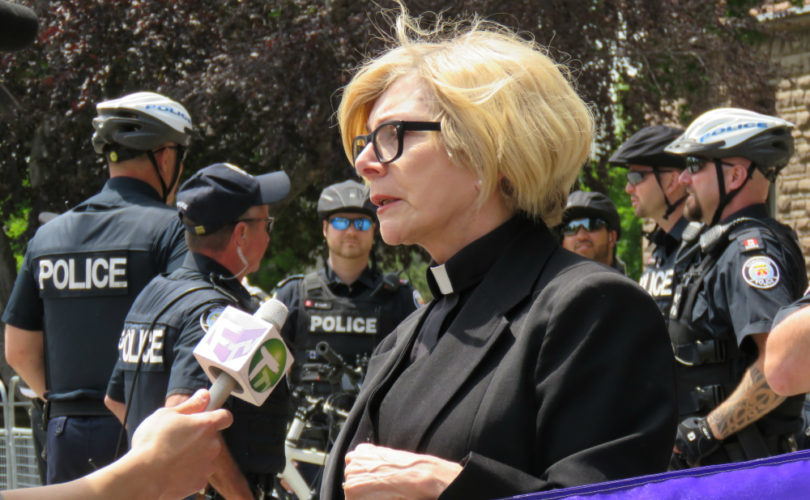 TORONTO, June 9, 2015 (LifeSiteNews) — Dressed in clerics and holding a rainbow-colored flag, NDP MPP Cheri DiNovo showed up at the June 7 sex-ed rally claiming she was there to show support for LGBTQ children, and that there are “six-year-old gays, lesbians and trans” children.

The United Church minister who self-identifies as a “queer woman” and is MPP for Parkdale-High Park sponsored Bill 77, banning reparative therapy for minors and declassifying it as an insurable medical service under OHIP. Bill 77 passed on June 4.

DiNovo, who said the majority of United Church members supported the Liberal government’s sex-ed curriculum, told reporters at the rally that children should know “it’s okay to be gay.”

She also told a rally participant that Pope Francis “has said to love our brothers and sisters.”

When LifeSiteNews called DiNovo Monday to clarify these remarks, her communications assistant Andrea Houston, formerly a reporter with homosexualist magazine Xtra and a 2012 “Honoured Dyke,” initially said DiNovo would be available, then stated she was in a meeting.

When LifeSiteNews asked Houston if DiNovo attended the rally with a Pride flag because she saw the sex-ed curriculum as promoting LGBTQ issues, Houston said, “No, no, this isn’t an issue about promoting. This is about giving kids information to keep them safe. LGBTQ kids are at the highest risk of suicide, depression. This is information that they need to keep them safe. Issues of consent, talking about… her position is very clear.”

“I’m concerned about your questions about promotion,” Houston added. “It says to me that you don’t really understand what the curriculum is about.”

When LifeSiteNews pointed out that there are parents who would not want the LGBTQ lifestyle promoted, Houston said, “It’s not a lifestyle, it’s an orientation, it’s an identity. If you want to read Cheri’s position, it’s posted on her website.”

When LifeSiteNews asked if, for the record, DiNovo was claiming any support from Pope Francis for LGBTQ issues, Houston said, “No, no, she wasn’t claiming anything about Pope Francis. I’m going to end this conversation now.”

Previously, Houston had explained that “Cheri has identified as bisexual since the 70s or more generally as a queer woman, ‘Queer’ is an umbrella term… it can mean anything under the LGBTQ umbrella.”

“‘Homosexual’ is more of a clinical term, we don’t generally identify ourselves as, I mean maybe some people do but I don’t and Cheri doesn’t,” Houston told LifeSiteNews. “LGBTQ is the more accepted and understood acronym.”

Pope Francis’ July 2013 remark “Who am I to judge?” has often been quoted out of context in support of pro-homosexual causes, including same-sex “marriage,” but he has been critical of the gay lobby, and frequently promoted the Catholic vision of marriage as exclusive to one man and one woman.

The pope has frequently warned against the dangers of gender theory, and denounced the “ideological colonization of the family.”

The Catechism of the Catholic Church makes the distinction between the homosexual act and the inclination, which while not sinful, is “intrinsically disordered,” and states that persons with homosexual inclinations “must be accepted with respect, compassion and sensitivity” and that “every sign of unjust discrimination in their regard should be avoided.”