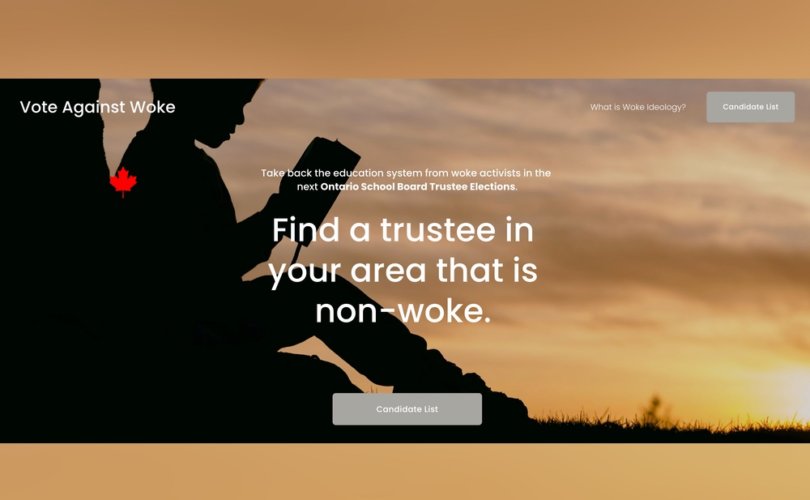 ONTARIO (LifeSiteNews) – A group of mothers and fathers has banded together to “take back the education system” in Canada by forming a new organization, Vote Against Woke, to aid voters in discerning which School Trustee candidates are “non-woke.”

“Vote Against Woke is an organization to help Ontario parents and residents find school board trustees in their area that will potentially oppose woke activists,” the group’s website explains.

Municipal elections in Ontario are on October 24, 2022.

In Ontario, both Catholic and public schools get full government funding and every election cycle, there are school trustee elections.

LifeSiteNews contacted Vote Against Woke to inquire about how the group started, and what its mandate and goals are.

A group spokesman, who chose not to reveal his full name for fear of being repercussions, told LifeSiteNews that the site is volunteer-run by concerned parents.

It was formed in response to a question that kept popping up, which is “I just want to vote for a candidate that is not woke. Who are they?”

“Our hope is that this woke ideology will soon be removed from schools, and then voters can focus on more advanced issues. To facilitate this, in the future we may consider a site that would allow all candidates to list their names and clearly state their policy platform,” said the Vote Against Woke spokesman.

The spokesman added that the project is managed by a “very small group of parents that are not associated with the education sector (other than having kids attending school). No one is willing to go public with their names.”

“A recurring frustration we heard was ‘I live in a country with high taxes and the supposed benefit of well-funded schools, yet I can’t send my kids to these schools because the woke ideological infiltration has become so bad,’” the group’s representative told LifeSiteNews.

Currently, Vote Against Woke is asking everyone to send them “the names of ‘non-woke’ candidates to help” them build a recommendation list.

People can send in information regarding trustee candidates through the Vote Against Woke website.

According to the group, the trustees that are recommended are listed as “green,” or not-woke candidates. This ranking is based on “crowd feedback on the perception that a candidate is non-woke.”

“This system serves voters, not candidates; therefore, the listed candidates are not associated with this site in any way,” says the group.

On the group’s site, one can view the candidates’ list for both Catholic and public-school boards in Ontario.

The group describes “woke ideology” today as a term commonly used “to describe extremists who extrapolate these well-intentioned principles in a radically ill-advised manner.”

“In many cases, this includes performative gestures—on social media or otherwise—that are clearly intended to burnish the ideological bona fides of woke individuals and groups, as opposed to providing real assistance to the allegedly oppressed masses whose well-being ostensibly lies at the core of the woke mission,” says the group.

“Unlike traditional forms of leftish thought, which have been aimed in large part at assisting working-class individuals, wokeism exhibits an unconcealed hostility toward underprivileged members of society who have not internalized faddish ideas about race and gender.”

The group’s spokesman told LifeSiteNews that often it’s “people of color that speak most passionately against Critical Race Theory (CRT) being taught in schools because it indoctrinates their children into victimhood culture.”

“Catholic parents most often felt ‘Catholic schools are not teaching Catholic values and principles…[and] some are unrecognizable as Catholic,’” said the spokesman.

The group’s site has since been promoted by some well-known Canadian political figures such as People’s Party of Canada (PPC) leader Maxime Bernier.

“VOTE AGAINST WOKE. This website launched by volunteer parents is trying to get crowd feedback on non-woke candidates in the next Ontario School Board Trustee Elections in order to help voters choose. Check it out,” tweeted Bernier last week.

School trustees in Ontario who do not capitulate to the demands of the far-left have been targeted by their woke colleagues.

Just recently, Waterloo Region District School Board (WRDSB) trustee Mike Ramsay was suspended by his board because he posted his conservative views on social media.

He is now suing the WRDSB.

In Ontario, in recent weeks parents have fought back against schools that they say have bent a knee to “woke” ideology, by allowing some teachers to apparently live out their perverse sexual fantasies in the classroom.

Recently, hundreds of students and parents from Trafalgar High School in Oakville, Ontario, protested a male shop teacher from the school, “Kayla” Lemieux, who can be seen in viral videos teaching class while wearing cartoonish, massive, protruding fake breasts.

The school and school board have thus far defended the teacher despite widespread public outcry.

Bernier held a rally regarding the shop teacher, saying schools should be safe places for kids and free of “perverts.”