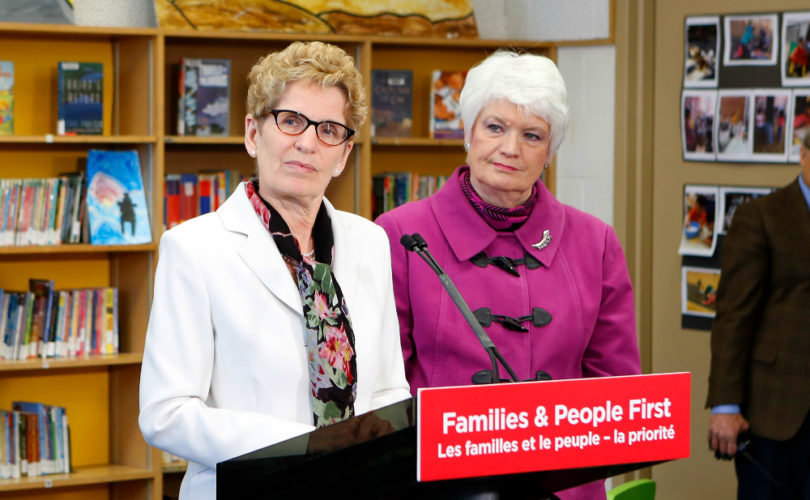 TORONTO, April 29, 2015 (LifeSiteNews.com) — A student strike called by parents alarmed by the new sex-ed curriculum is going ahead for May 4-11 despite an attempt to mollify critics by Ontario Premier Kathleen Wynne.

Wynne met today with the leaders of several ad hoc opposition groups critical of Wynne’s new sex-education curriculum, which normalizes homosexuality, transgenderism, and pre-marital sexuality, but refused to budge on their call for a serious consultation with parents.

“I feel at this point we’re not driving the strike,” one organizer, Omar Kasmieh, told LifeSiteNews. “A lot of parents are upset. I don’t think anyone can change their minds.” The curriculum, said Kaslieh, is in conflict with “their religious beliefs, their cultural and family values.”

Uniting parents is a Facebook page, Parents & Students Strike: one week no school, and a webpage. They provide room for comments and questions. It also asks all participating parents to download a form letter and send it to school before the strike, warning their child will be withdrawn.

Addressed to “Dear Principal, Teachers and Parents Council Co-ordinator,” it asserts that the new Health and Physical Education curriculum “contains information that we consider is age-inappropriate and do not align with the principles and belief of our family, and thousands of other families across Ontario [sic].”

“As a family we adhere to a set of values based on our beliefs and culture. We believe that it is our responsibility to teach these values to our children and have the greatest authority over how and when such sensitive topics are being introduced to our children.” The letter then goes on to warn that this family’s children will be absent in protest for the week in question.

Kasmieh, a Syria-trained physician studying naturopathy in Toronto, told LifeSiteNews, “This isn’t just one culture or one belief. This is a lot of parents from all over Ontario.” Though the website shows only 6,000 supporters, “many of those who are concerned are New Canadians not too good with social media. Many more than that are involved,” Kasmieh said. “And it’s not just happening here [in Mississauga]. There are groups in Windsor, in Ottawa, in London. There are even some Catholic parents.”

Their issues are three: some material that “comes too soon in the curriculum” and other information that “doesn’t align with their cultural values” at all—at whatever grade level it be taught.  As well, parents are protesting how the ministry has “abruptly” introduced the curriculum without consultation. “The communication from the ministry has been unbelievable,” said Kasmieh.

“I talked with two mothers yesterday who heard about the contents of the curriculum from me. They were very upset the ministry had not informed them.”

Speaking for his own daughter’s school, Kasmieh said,  “We get tons of information from the school about activities but only a single letter about the sex-ed curriculum” –and that note said nothing about its content.

“We don’t want to take our children out of school. Many parents will have to take a week off work to do this. But the government hasn’t left us with any other option,” said Kasmieh.

Parents aren’t alone in giving Kathleen Wynne’s government a failing grade both for communications skills and content. The Peel school board that covers the huge municipality west of Toronto has written the Ministry of Education an open letter asking that the contents of the curriculum be “clarified.” Peel chairwoman Janet McDougald told CBC radio that parents “are feeling somewhat disenfranchised” by the government’s lack of interest in their concerns.

Wynne responded to criticisms by claiming she had “spoken to dozens of media outlets, the minister has spoken to dozens of media outlets. … There is information that has been distributed around the province and is available online. It's available to all of the school trustees and parents in the province [and] clarifies the myths and the realities in the health and physical education document.”

Significantly missing from statements from Wynne and Education Minister Liz Sandals is any willingness to change the curriculum to address parental concerns.  Jason Tysick of the Ottawa-based Meighen Institute told LifeSiteNews that while genuine concern over the content of the curriculum fuels much of the protest, so does the widespread conviction that the government did not adequately consult parents and had made up its mind well in advance.

Tysick advised the strikers to avoid statements that would allow them to be portrayed by the news media as “homophobic.” “The strikers should send the message that, ‘We’re not rejecting the program. We have no information about it and so we cannot in good conscience assent. It’s too risky to put our kids into it.’”

But for Ghada Melek, who also supports the strike, it is the content that is most disturbing, though the government’s lack of interest in parental feedback is more than evident.

Melek told LifeSiteNews she got together with about 30 other professionals in the Brampton area to analyze the sex-ed curriculum and to gather the expert opinion of psychologists, doctors, and child educators. Calling their group The Well Informed Parent, they found 22 objectionable or age-inappropriate components and drafted their own alternative curriculum, which they then ran past parents’ groups for many weeks. But when they presented their third draft in Powerpoint to the government, they were patronized with clichés and ignored.

Melek said the biggest problem with the sex-ed curriculum was its promotion of gender identity with primary school students. “We propose putting it off to Grade 10.  Introducing it earlier, when children may be innocently exploring gender roles, is too risky. It might lead children to draw the wrong conclusions about their own identities.”

Teaching about “sexual consent” in Grades 7 and 8 is also problematic, her group’s research indicated, because it might make children think that if they aren’t having sex by then they are abnormal. “It normalizes and legitimizes pretty dangerous behaviour.” The group also found the curriculum overestimated the effectiveness of condoms in preventing sexually transmitted diseases.

Tysick added another objection to the early teaching of consent. “Once children understand the concept of consent, a smart lawyer might get someone off on a child sexual abuse charge by arguing the child consented fully, because he’s been taught what it meant in school.”

Melek said her group was supporting the strike, and encouraging those who couldn’t afford to take a week off to at least pull them out on May 4.