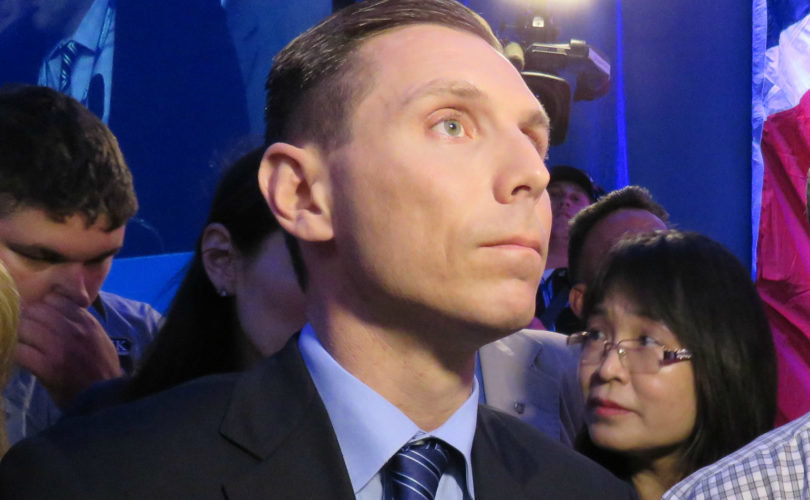 TORONTO, August 31, 2016 (LifeSiteNews) — Patrick Brown’s highly publicized flip-flop over sex education and subsequent apology for saying he would scrap it has some critics questioning just how much influence the special interest activist group LGBTory has over the Ontario Progressive Conservative leader.

“He’s afraid. He wants them onside. He’s given them everything but the kitchen sink, according to their letter,” noted Gwen Landolt, vice president of REAL Women, referring to the LGBTory statement praising Brown as an “ally” and stating he has “reassured us that he does not intend to remove pro-LGBT elements” from the sex-ed.

“Brown claims to have a ‘big tent’ and an inclusive party,” Campaign Life Coalition vice president Jeff Gunnarson said, “but his downfall and duplicity over sex ed show he’s interested in pandering to LGBTories to the exclusion of anyone else.”

In an effusive apology published in Monday’s Toronto Star, Brown wrote that the letter he signed stating the PC Party would “scrap” Liberal Premier Kathleen Wynne’s controversial sex education was a “mistake.”

The now infamous letter has been circulating in the Scarborough-Rouge River riding during a tightly fought September 1 by-election campaign.

Independent candidate Queenie Yu is running solely on a platform to repeal the Liberal sex ed in a riding that has a majority of new Canadians, including Tamil and Chinese, many of whom have expressed opposition to the curriculum.

In his Star op-ed, Brown stated he favours parental consultation but declared clearly he would not repeal the sex-ed curriculum.

However, he based his case for doing so almost exclusively on LGBTQ and gender identity issues, raising the spectre of “intolerance” and “homophobia:”

It is important to have sex education to combat homophobia, and raise important issues like consent, mental health, bullying, and gender identity.

Brown immediately followed his statement that he was “determined to lead an Ontario PC Party that is modern, inclusive, pragmatic and that reflects the diversity and values of our province” with a defence of his championing of LGBTQ rights.

“Even his apology in the Toronto Star focused on supposed ‘intolerance’ and LGBT sensitive issues, and sidestepped parents’ legitimate concerns about the sex-ed curriculum, that their kids are being exposed to sexual ideas way too early,” pointed out Gunnarson. “Brown has made sex ed more about LGBT issues than Wynne has.”

In framing the sex-ed issue primarily in terms of LGBT rights and gender identity, Brown shrewdly and unfairly portrays those opposed to the controversial curriculum as intolerant, Gunnarson pointed out.

“The Liberals have shown they don’t believe parents have the right to educate their kids, and it’s clear Brown doesn’t believe that either, and that he and LGBTory want those parents out of his so-called ‘big tent.’ So much for tolerance,” Gunnarson noted.

Indeed, LGBTory’s August 27 statement noted that “Mr. Brown assured us that inclusion and diversity continue to be priorities for him and that LGBT issues will be a focus in the Ontario school curriculum.”

We have worked closely over the past year with Patrick Brown to provide input to him and his party on LGBT issues and to help with OPC outreach to the LGBT community in Ontario. He has provided us with invaluable support in our campaign to change the Conservative Party of Canada’s (CPC) marriage policy and to use his influence to remove obstacles to the CPC’s recognition of same-sex marriage.

We consider him an ally on LGBT issues and question the raising of this matter in the middle of a hotly-contested by-election campaign. We believe he deserves more recognition for his outreach to the LGBT community in Canada and that partisan politics have obscured the progress he and the OPC have made in this area.

Brown’s ardent advocacy of LGBTory “ignores social conservatives, who make up at least 40 percent of the Progressive Conservative Party’s base,” said Gunnarson, “not to mention the 185,000 parents who signed a petition to repeal the sex-ed curriculum.”

Landolt says LGBTory is “not dictating so much” to Brown as he is “working with them to get their support” for two reasons. “One is to undermine Wynne, who as a lesbian has support of the LGBT, in the 2018 election,” and the other is “to protect himself from their criticisms in the 2018 election.”

Meanwhile, Yu, who is running in the by-election on a platform to repeal the Wynne sex-ed, told LifeSiteNews that “I’m just really disappointed, and I think, when I speak with other people about this issue, they say that the PC Party needs a new leader, that Patrick Brown has to go.”

“He doesn’t have any principles that he’s fixed to. Right now, it seems that he’s just changing his mind when he experiences criticism from the media,” she said. “How can we have a premier who does that, that’s what they’re saying. … They really don’t trust him anymore.”

Moreover, “because a lot of the people who are supporting me are conservative individuals, they are saying, I am not supporting the Progressive Conservatives anymore,” Yu added. “One of them said to me yesterday that she was going to give a cheque to the PCs. Instead, she’s giving it to me.”

Those who wish to support Yu’s campaign before the Thursday by-election, go here.