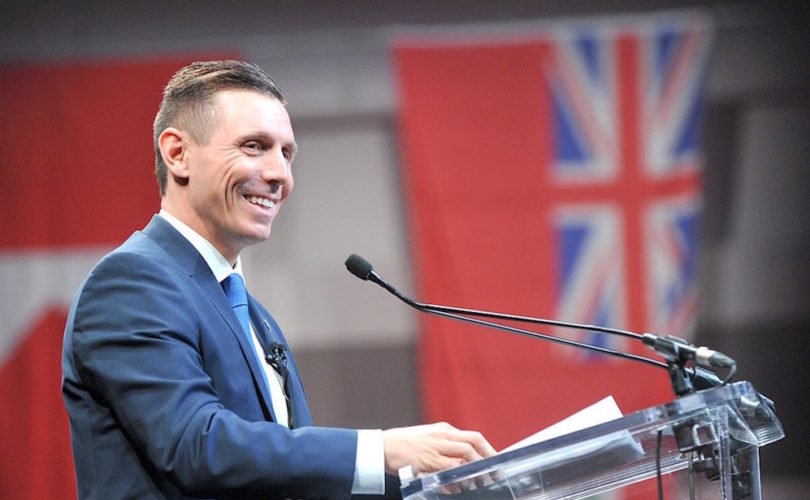 TORONTO, December 12, 2016 (LifeSiteNews) – Ontario Progressive Conservative leader Patrick Brown has banned social conservatism from his party, if not social conservatives themselves, telling the latter at a press conference last week that they should keep their views on abortion, same sex “marriage” or sex education to themselves if seeking to run as Tory candidates in the 2018 election.

Asked if the party was systematically blocking social conservatives from getting nominations as candidates for the next general election, Brown responded, “If your reason for going to Queen's Park would be to push a divisive social issue, then that would be unwelcome. People can have their private religious views, but just know where I stand and what the focus of our party is.”

Brown’s statements drew a strong response from Jack Fonseca of Campaign Life Coalition. “Brown is not only showing himself to be a deceitful two-faced politician and a tyrant, but also a fool for letting the biased liberal media lead him around by the nose to arrive at this policy that may very well cause the PC Party to implode or split.”

Fonseca accused Brown of letting the news media set his policies. “Brown is not his own man, but rather an unthinking puppet of the biased mainstream media, manipulated here and there as they please, like a marionette on strings,” he told LifeSiteNews. “He's a plaything of the liberal press. That's not something that will benefit either the Conservative Party or Ontarians in the long run.”

“But abandoning your own base is not the way to win. [US President-elect Donald] Trump has just shown that in the U.S,” she told LifeSiteNews. “He appealed to his base and defied the media.”

What’s more, she said, “Hundreds of thousands of Ontario parents are up in arms about [Wynne’s] sex-education curriculum. For them, their kids are the most important thing, even though hydro and jobs are important too.”

Campaign Life Coalition Vice President Jeff Gunnarson said, “Patrick Brown and his advisers seem to be ignorant about social conservatives. Most social conservative candidates are running due to a strong belief in serving. They want to bring about a society that is healthy, prosperous, educated, and have a shot at living as dignified human beings.”

“The so-con candidates we support are never ‘single issue’ candidates. Nor do we want them to be. We are hard-working, taxpaying citizens who do most of the volunteering, donating and are a compassionate people,” he continued. “And if we believe Compass polling that only 30 percent of Ontarians are socially conservative, can any party ignore a demographic that size and expect to be inclusive, expect to win? If that is the case, then the party’s top priority should be improving math scores of our children.”

“Our numbers show the base is 40 percent. You can’t shut us out. You don’t want to shut us out,” Gunnarson added. “The Party belongs to us as it does all members. If Patrick Brown doesn’t understand this, he doesn’t deserve the leadership. If he is still here in 2018, he will likely win providing there are candidates worthy of our vote.”

Brown won the leadership in 2015 with strong social conservative support based on a perfect voting record in the House of Commons with respect to abortion, same-sex “marriage” and euthanasia, according to Campaign Life Coalition.

He began distancing himself with his open support of the LGBT agenda, and then sealed the division in the recent Scarborough by-election, where he authorized a mass mailing appealing to parents upset by the radical sex-ed curriculum, then denied it once it became public, and strongly supported the curriculum.

Since then, he has renounced his federal voting record. He has required his caucus to either vote for the government’s bills promoting the LGBT agenda (such as one this month to eliminate all references to fathers and mothers in government record-keeping) or to absent themselves from the legislative chamber during the vote.

Last week, Jay Tysick, a disgruntled and unsuccessful candidate for the Tory nomination in Carleton, claimed he had been shunned because of his social conservative views. “There seems to be sort of an aggression pointed toward social conservatives in that party now. … Personally, I have socially conservative views, but I don’t believe it’s my place, in government, to foist those on others. I’m very right wing and you’d think that, in the Conservative party, that would be a good thing,” he told the Toronto Star, which cited sources indicating Tysick was only one of five candidates rejected by the party for their social conservative views. Tysick says he might run as an independent in 2018.

But Brown told reporters “the vast, vast, vast majority have no interest in revisiting social issues.”

Enough Ontarians are interested to affect the election, Granic Allen and Fonseca argue. “Social conservatives are going to stay at home, or they’ll vote for a new conservative party,” Granic Allen said.

Fonseca notes that nearly half of the electorate didn’t vote in 2014. “I can assure you that the 48 percent of eligible voters who've given up on the political process contains a huge proportion of religious and moral conservatives who have come to believe, thanks to unethical politicians like Patrick Brown, that it makes no difference who you vote for because they believe they're all corrupt.”

CBC reporter Mike Crawley added his own opinion: “It's essential for Brown, if he wants to become premier of Ontario, to keep his party away from politically toxic causes like defunding abortion or questioning same-sex marriage.”

But Fonseca counters, “To the contrary, showing that there is a moral difference between PCs, Liberals and NDPers is a legitimate path to victory for the Tories. Being known as the only party where traditional family values, respect for life and religious freedom are tolerated, the PC Party can attract enormous numbers of new voters and supporters,” especially from new Canadians.