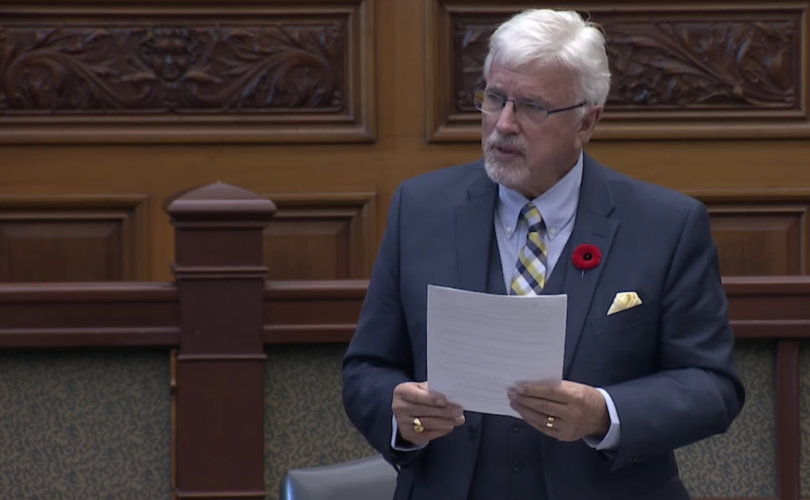 TORONTO (LifeSiteNews) – As Ontario PC leader Patrick Brown muzzles an MPP who suggested the party would move on social conservative issues once elected to government, he's signaled that he will deny free votes on “social issues” to promote his “inclusive” agenda.

Brown made his comments after forcing a recantation by Ontario Progressive Conservative MPP Rick Nicholls over comments expressing the importance of social issues.

Nicholls, an ardent pro-lifer who represents the riding of Chatham-Kent-Essex, was caught on audio by TFO telling an audience of the Canadian Multicultural Care Group and the Canadian Christian Association that “Social issues are really, really important. We need to form government. Then … watch us go. Watch us go.”

His point, according to TFO, was that social conservatives should be patient, waiting until the party forms the next government before pushing for changing the unpopular sex-education curriculum or recent laws advancing the LGBT agenda. This was the Tories' “secret plan,” TFO said.

But Brown, who already stands accused of disqualifying so-cons who try to become party candidates for the 2018 election, quickly demanded that Nicholls retract.

“As leader, and as premier, I will lead an Ontario PC party focused on reversing the economic damage of the Wynne Liberals. … I will lead an inclusive government where intolerance will have no place,” Brown said. “Any statement or implication to the contrary, including the comment made by MPP Nicholls, is false and needs to be immediately retracted.”

And so it was. Nicholls quickly said, “I retract and apologize for my comments. Ontario PC Leader Patrick Brown has made it clear that he is committed to leading a modern, inclusive and pragmatic Progressive Conservative Party. The party will not be revisiting divisive social issues, either as an opposition party or if we are fortunate enough to form government.”

Nicholls’ comments indicate that the social conservative faction within his own party and caucus is not entirely happy with being forgotten by Brown in his fixation on defeating Liberal Premier Kathleen Wynne solely on the strength of her government’s fiscal and economic mismanagement.

Only two days ago, Brown was asked to respond to claims from Jay Tysick that he was rejected for the Tory candidacy in the Carleton riding because of his social conservative views. Brown said, “If your reason for going to Queen's Park would be to push a divisive social issue, then that would be unwelcome,” he said. “People can have their private religious views, but just know where I stand and what the focus of our party is.”

To make his point that he had no interest in promoting social conservatism, Brown led his caucus in backing Bill 28, the All Families are Equal Act that eliminated references to the mothers and fathers of newborns. Those Tory MPPs who opposed the bill absented themselves from the Legislative Assembly so that it could pass unanimously.

Before that, Brown backtracked on Wynne’s notorious sex-education curriculum, which teaches gender fluidity to grade schoolers and normalizes homosexuality. He circulated a letter to voters in the recent Scarborough byelection condemning the curriculum, only to deny his authorship when the news media got hold of it.

Federal Conservative leadership candidate Brad Trost agreed. “This is bad,” Trost said Tuesday, according to the iPolitics website. “The Ontario PCs are heading for a split here if they try to push out the social conservatives.”

Both Trost and Allen put the so-con strength at 30 percent of the electorate. “At least 30 percent of Ontarians are social conservative on a wide range of issues. That 30 percent of the population overwhelmingly votes PC. If you tell them to stay home, not vote, or only vote and then have their issues completely ignored, you’re going to end up splitting your party,” Trost warned.

But political consultant Rick Anderson, a former aide to Reform party leader Preston Manning, thinks Brown is doing just what Conservative Prime Minister Stpehen Harper did to get into office and stay there from 2006 to 2015 — suppress the so-cons.

“Prime Minister Harper did a pretty good job in this regard, making sure the federal party continued to be open to people with a variety of perspectives but also emphasizing that it’s been 30 years or whatever since the courts have ruled on issues like abortion … and we’re not about to restart those kinds of debates,”Anderson told iPolitics.