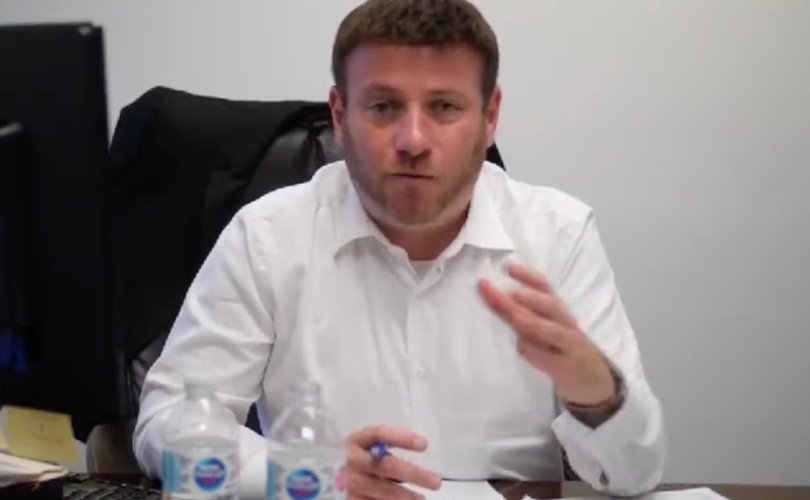 YORK, Ontario (LifeSiteNews) – In an emotional video message, Independent Ontario MPP Roman Baber said “half baked” and “radical left-wing” COVID-19 rules and mandates have no place in Canada, and that people should never be forced to do something against their will.

Baber made the comments via a Twitter video posted yesterday called “The Calls – Part 1,” saying overbearing COVID rules have lead to a “disaster” at the makings of governments.

We don’t force people to do things against their will. We’ve never done that before. There is no reason to start.

If you haven’t already, join me now at https://t.co/aDOf9sOz0k #onpoli #cdnpoli pic.twitter.com/nehGs2StJP

“You can’t force people to do anything against their will. It’s a half-baked, radical left-wing proposition that you can institute some sort of an ideal society in the way that you would want to design it. It doesn’t happen.”

In his video, Baber said that recently he has been “taking calls and meetings all day with constituents and even people that are not constituents” regarding COVID jab mandates.

He shared a story of how a woman called him, scared, saying her husband had an adverse reaction to the jab.

“And he’s afraid of getting the second shot, but he’s going to be terminated in ten days from now unless he takes a shot.”

Baber then blasted jab mandates and the efficacy of the coronavirus shots.

“Why do we insist that people do something against their will or else would cost them their jobs and would do it knowing that the efficacy of the vaccine wanes after six to eight months and would do it even though we know that people that are vaccinated also transmit the virus?” asked Baber.

“Why do we force people to do something against their will when the vaccine doesn’t stop transmission and it wanes after six to eight months just for the sake of having them comply,” Baber reiterated.

Baber was booted from the Progressive Conservative Party by Ontario Premier Doug Ford for opposing COVID lockdowns earlier in the year. While Baber has taken coronavirus shots himself, he opposes them being mandated.

Recently, Baber launched a petition to go along with his “Jobs and Jabs” bill introduced to the Ontario Legislature that would stop employers from discriminating against employees who choose not to get the COVID-19 injections.

His petition had well over 120,000 signatures; however, despite the public support, Baber said it was with “sadness” that he had to convey his “Jobs and Jabs” bill was not moved forward to second or third reading.

— Article continues below Petition —
HELP AUSTRALIANS restore their freedom by protesting outside the Australian High Commission - Dec. 4th - CAN
Show Petition Text
1896 have signed the petition.
Let's get to 2500!
Thank you for signing this petition!
Add your signature:
Show Petition Text

1) SAVE THE DATE and ATTEND a Pro-Freedom Rally on DEC. 4th (12pm, local time) at the Australian High Commission in Ottawa, (address below), or at an Australian consulate office in one of the cities listed below.

2) Please SIGN and SHARE this petition, directed to The Acting High Commissioner of Australia to Canada, Ms Katherine Ruiz-Avila, asking her to:

LOCATIONS and PHONE NUMBERS of the Australian High Commission in Canada, as well as their consular offices in Toronto and Vancouver. [Please use the phone number to politely, but firmly object to the oppression of the people of Australia if you can't go to the protest in person.]:

He has vowed to continue to fight for his un-jabbed constituents, however.

Baber’s website includes an area where one can join him to “end all lockdowns, restore access to health care, go back to work, revive our democracy and respect individual choice, while protecting long-term care and building hospital capacity.”

In October, Ford walked back a mandate that all healthcare workers be jabbed or lose their jobs, citing the potential strain on the healthcare system this type of directive could cause.

However, local Ontario health boards can come up with their COVID jab policies if they wish, and some have taken it upon themselves to implement jab obligations.

Some large municipalities in Ontario, such as Toronto, have mandated the jabs for all city workers.

Many private businesses in the province have enacted no-jab no work policies as well.