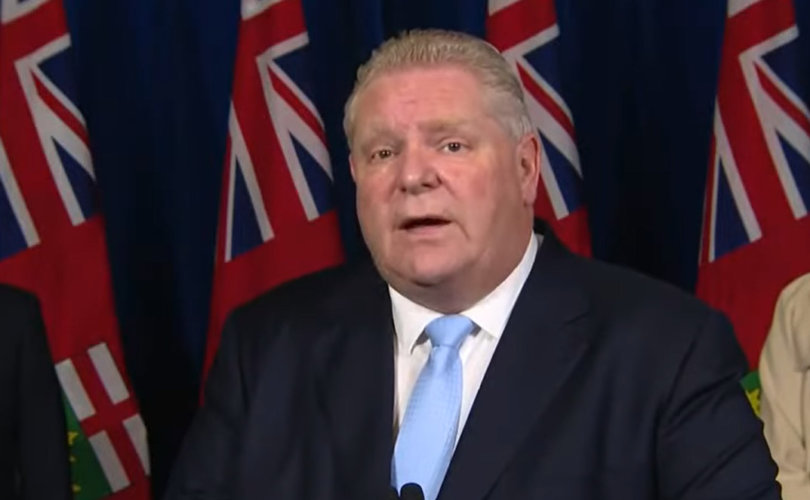 TORONTO (LifeSiteNews) — Ontario Premier Doug Ford announced Monday morning that vaccine segregation measures will be dropping on March 1, but masks will stay in place until “a later date.”

The move to end the COVID restrictions comes as the Freedom Convoy continues in Ottawa, with a considerable growth in numbers seen over the weekend.

Premier Ford was quick to say that the move to drop restrictions was “despite” the freedom protests. Nevertheless, by dropping mandates he is giving Freedom Convoy supporters more of their freedoms back.

He also threatened the truckers, intimating that if they do not disband, they could face “serious consequences” for “lawless activity.”

“You will lose that vehicle and your licence.”

Peaceful protesting is protected under Canadian law. To date, the protests have been overwhelmingly peaceful.

He also said that the Freedom Convoy was “holding millions of jobs and people hostage.” There have been no reports of truckers taking people hostage or taking jobs away from people. In contrast, the truckers are protesting against vaccine mandates that could render more people unemployed.

Ford said that lockdowns and vaccine segregation measures were “absolutely necessary and saved tens of thousands of lives.”

This statement is in contrast to recent evidence that lockdowns and draconian COVID polices did little to nothing to curb mortality, but did contribute to mortality in other areas through ripple effects of upending people’s lives and access to basic services.

In addition to lifting vaccine passports, capacity limits will be dropping in a couple of days in some locations, with further capacity limits rolled back in the coming weeks.