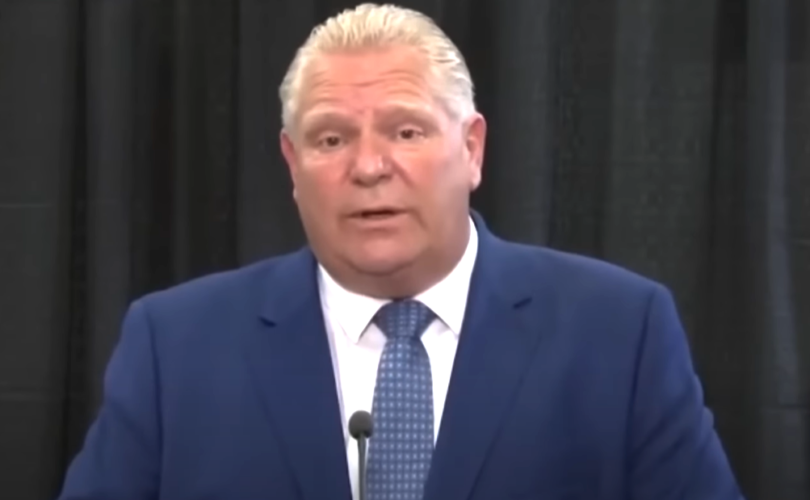 TORONTO (LifeSiteNews) — Ontario Premier Doug Ford quickly exited a press conference after a reporter asked if he was aware his chief medical officer of health has a “conflict of interest” with vaccine giant Pfizer.

“Mr. Ford, do you know that [chief medical officer Dr.] Kieran Moore has financial ties with Pfizer and he sits on one of their advisory boards?” Rebel News reporter Tamara Ugolini asked Ford in a video posted last week.

“Mr. Ford, were you aware of that when you appointed Kieran Moore?” the reporter asked again while Ford and his staff members continued walking away.

“Would you have appointed Kieran Moore if you knew he was directly tied with Pfizer?” pressed Ugolini, resulting in a staff member again telling Ugolini that Ford will not be answering questions.

Ugolini’s line of questioning comes after Rebel News reported that Moore himself admitted a conflict of interest with Pfizer in a presentation for the University of Toronto in March 2021, months before he was appointed by Ford as chief medical officer for Ontario in June 2021.

According to the presentation, Moore “was principle investigator for the Canadian Lyme Disease Research Network” and sits on Pfizer’s advisory board for their Lyme Disease North American Strategy.

As chief medical officer, Moore was instrumental in the creation and implementation of Ontario’s vaccine passport system, which for months barred vaccine-free Canadians from restaurants, bars, concert venues, and sports complexes among other locations.