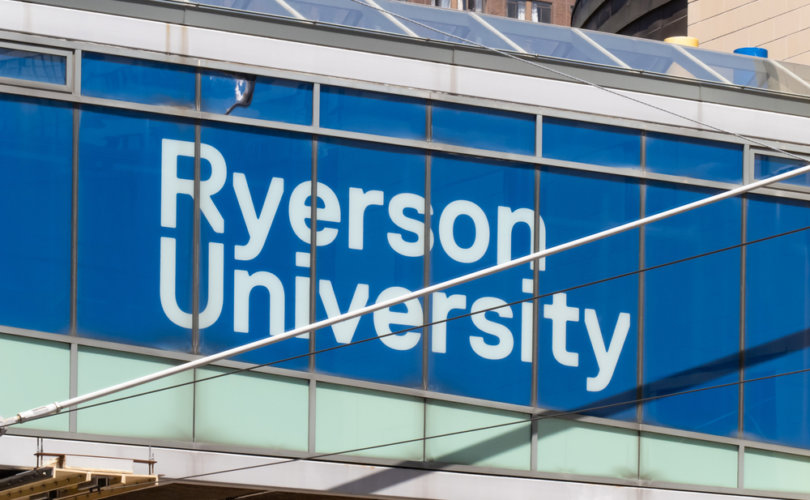 (LifeSiteNews) — In a recently published letter, Dr. Claus Rinner, a tenured full-time professor at Ryerson University in Toronto, revealed the way in which the province’s colleges and universities went beyond the provincial Chief Medical Officer of Health’s directives by cancelling professors, students, and staff for refusing COVID vaccines.

On Aug. 30, 2021, Dr. Kieran Moore, the Office of the Chief Medical Officer of Health, issued instructions “to establish mandatory COVID-19 vaccination policies in … post-secondary institutions.” These instructions initially allowed for a) proof of vaccination, b) exemption for medical or religious reasons, and c) an educational course on vaccination for those declining vaccination for personal reasons. However, the instructions included a caveat that allowed secondary schools to exclude option (c) from their COVID policies.

According to Rinner, “not a single Ontario college or university maintained the option to decline the shots and continue accessing their campus using antigen testing after the end of a transition period in the middle of the fall semester. At that point,” Rinner reveals, “unvaccinated contract lecturers and those who declined to declare their personal medical status lost their teaching contracts and others were put on unpaid leaves. Noncompliant students started to receive threats of being de-enrolled from in-person, and in some cases online, classes, and tenure track faculty who did not secure a leave or other workaround were suspended at the start of January 2022.”

According to Rinner, however, Moore undermined this instruction immediately in a memorandum the following day that revealed the lack of any scientific basis for the instruction. “On the day after his instructions to post-secondary institutions,” Rinner wrote, “Chief Medical Officer of Health Dr. Kieran Moore issued a memorandum to Ontario’s 34 regional Medical Officers of Health (leaked by independent MPP Roman Baber) stating that ‘recent data from the Delta variant shows that when breakthrough cases occur, fully vaccinated individuals have similar levels of infectiousness as in unvaccinated cases.’ Discriminating between vaccinated and unvaccinated individuals on campus therefore makes no sense from a public health perspective.”

Rinner also pointed out that in other provinces such as British Columbia, the same scientific data was reviewed and actually positively influenced the policies of their universities. “UBC also shared a letter received from the Chief Medical Health Officer of Vancouver Coastal Health,” he wrote, “that includes the following passage: ‘Current scientific evidence, including BC data, indicates that COVID-19 vaccination (2-doses), while effective at preventing severe illness, is not effective at preventing infection or transmission of the Omicron variant of the virus, which now accounts for almost 100% of cases in the province. Therefore, there is no material difference in likelihood that a UBC student or staff member who is vaccinated or unvaccinated may be infected and potentially infectious to others. We also know that Omicron causes less serious illness than other variants of COVID-19, which is particularly true for young people.”

Rinner pointed out that “the letter goes as far as to state that ‘some of the measures in place on campus — such as ongoing mandatory rapid tests for unvaccinated students and staff, and related employment/academic sanctions — are not useful in preventing the transmission of COVID-19 on campus.’ And even further, ‘we have no evidence that those who have not complied with UBC policies have posed any public health risk to their fellow students, faculty or staff, even during circulation of other variants.’”

As Rinner documents in mid-February 2022, “Ontario Premier Doug Ford had announced the end of Ontario’s vaccine passport on March 1. The CMOH [Chief Medical Officer of Health] referred to this date with respect to ending the vaccination requirement for post-secondary campus access too. But the universities won’t have any of it; instead, they continue the segregation until the end of the current winter term. In a comically short statement,” Rinner continued, “COU declares: [March 11, 2022] – ‘In order to minimize uncertainty and disruption and to continue to support our students, staff, faculty and university communities, Ontario’s universities will maintain their COVID-19 vaccination and masking policies until at least the end of the current term.’”

In December 2021, Rinner was given notice that as of January 7 he would be put on unpaid leave and dismissed on March 18 for non-compliance with the university’s vaccine mandate. Finally, in early February he was granted an accommodation.